Designer BioMed created a striking 3D reconstructed neuron model for the Alford Laboratory at the University of Illinois at Chicago. The model was generated using experimental data and will be used to facilitate research discoveries about the structure and functions of various neuron types.

Dayna Menken, the founder of Designer BioMed, created the 3D model by first using raw data generated by the Alford Laboratory. She then produced a new form over the data by connecting the disparate portions together—this is observed as a wireframe model in the second image below. The 3D model was created using Autodesk 3Ds Max and Pixologic ZBrush. The images were composited in Adobe Photoshop and the animation was created and composited in Adobe After Effects.

Here’s an animated clip showing the progression from raw data to the completed 3D form, followed by three images that break down each stage of the process. 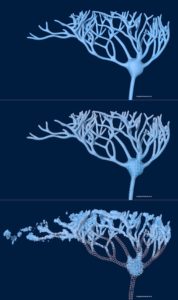 In addition to specializing in 3D imagery and animation, Designer BioMed also creates stunning 2D illustrations and motion graphics for use throughout the biomedical industry. Explore Designer BioMed’s portfolio for more work.

About the Author: Andie O'Donnell