Henri Matisse: The Cut Outs at the Museum of Modern Art in New York

Henri Matisse: The Cut Outs at the Museum of Modern Art in New York

“Instead of drawing and then applying color, I draw directly with the color.”

These are words Matisse wrote to his friend and fellow artist Pierre Bonnard describing his paper cut- out works.
Henri Matisse (1869-1954) was a prolific French artist whose career spanned six decades.  His body of work includes beautiful paintings of figures, still lives and landscapes, best known for their strong palette and varied textures.  However Matisse considered his later work–paper cut-outs- his life’s masterpieces. These stunning large-scale paper cut-outs were created, as Matisse called it by, “drawing with scissors.”
The Red Room by Matisse, 1908 (oil on canvas).
Currently on view at the Museum of Modern Art (MoMA) in NewYork is the most comprehensive Matisse cut-out exhibition ever mounted.  The show, which was on view at the Tate Modern in London, will be at MoMA until February 8, 2015, and is a must see for anyone interested Matisse’s later works. 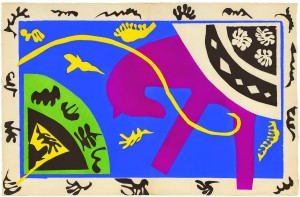 The Dance Mural by Matisse, 1932-1933 (oil on Canvas), Barnes Foundation, Philadelphia, PA
Henri Matisse used cut paper in the 1930s and early 1940s as a compositional aid while working on paintings.  In Still Life with Shells(1940) Matisse cut out the shape of the various objects in his composition and used string to simulate the tabletop.  This allowed Matisse to move the elements around until he arrived at the desired composition. 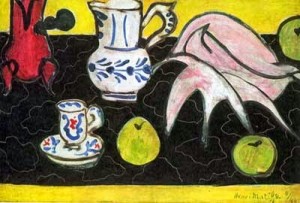 Still Life with Shells by Matisse, 1940 (oil on canvas)
In 1941, after recovering from abdominal surgery, Matisse found easel painting too strenuous so he started experimenting with cutting gouache painted paper into abstracted organic shapes.  With the aid of several assistants Matisse was able to “cut directly into color”. The paper cut outs were attached to the studio walls using thumbtacks.  Matisse directed the lively compositions from his bed or wheelchair. 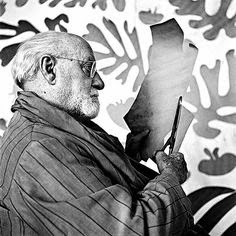 Matisse creating cut-outs in his studio, 1940s
The wall size “The Parakeet and the Mermaid” features animated plants, pomegranates and other organic shapes including a blue parakeet and mermaid.  “I have made a little garden all around me where I can walk. There are leaves, fruits and a bird. I have become a parakeet and found myself in the work.”

The Parakeet and the Mermaid by Matisse, 1952, wall size paper cut-out mural
In  1948 Matisse began work on a four year cut out project for the Chapel of the Rosary located near his studio in Vence on the French Riveria.  Matisse’s extensive work for the chapel included radiant stained glass windows, and expressive line drawings painted on tiles that dominate the chapel.  Matisse also designed vestments and a tabernacle for the chapel. “It is the result of all my active life.  Despite all its imperfections, I consider it my masterpiece.” 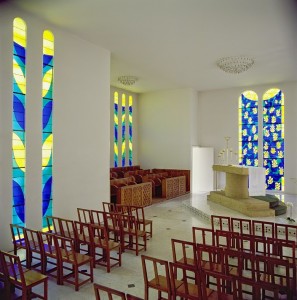 The Chapel of the Rosary in Vence, France, by Matisse, 1948-1952
I highly recommend a visit to see this wonderful exhibition of at MoMA!  I also recommend the catalog, Henri Matisse: The Cut-Outs published by the Museum of Modern Art .  Another book of interest on Matisse and his later works is Henri Matisse, Drawing with Scissors, Masterpieces from the Late Yearsby Olivier Berggruen and Max Hollein, published by Prestel.  For a book on Matisse’s masterpiece The Chapel of the Rosary I recommend Matisse The Chapel at Vence published in 2013 by the Royal Academy of Arts
[/fusion_builder_column][/fusion_builder_row][/fusion_builder_container]
By Marie Dauenheimer|November 4th, 2014|Syndicated Content|