What do Nicole Kidman and I Have in Common?

What do Nicole Kidman and I Have in Common?

Our first night in the city, I dipped my chip deep into the bowl, and scooped what I thought was some black rice underneath the guacamole. Wow! It was good; kind of smokey, kind of crunchy, it tasted better than the guacamole I get in the U.S. But, once I knew what it was, I thoroughly spat it out! Not only that, my reaction was so extreme that I looked like a Mexican jumping bean— or in this case a grasshopper— hopping up and down, spastically spitting and flailing my arms in the process. My family was amused.

It turns out that insects are a good source of vitamins, fats, and essential minerals, and this practice has been going on for thousands of years. It’s called entomophagy, the human consumption of insects and arachnids as food. Nicole Kidman is an entomophage, and you can watch her eating insects here. My dad was an entomologist. We spent many summers in Mexico, lived in Italy for two years, and traveled the world thanks to his work. Whenever an insect was found in our food—be it a tiny beetle in a box of grains or larva in a bowl of oatmeal—he encouraged us to eat it anyway, saying we’d be getting good protein and nothing would harm us in the process. (I’m not sure any of us followed his lead but he never stopped trying to convince us.) I’m sad to say that for all my world adventures (Japan, Yugoslavia, Italy, Greece, Turkey, France, Spain, Mexico, Costa Rica, Belize, Germany, Austria, England, Wales, Scotland, Israel, Jordan), I’m not as cuisine curious as I ought to be. Don’t get me wrong, I love ethnic food and immersing myself in other cultures. And, for the record, when we lived in Italy we went to Italian public schools, not the American schools. That said, I’m willing to explore the local delicacies, but insects, animal entrails, brains, well, that’s where I draw the line!

For all my worldliness, I’m no Anthony Bourdain. At least my son Josh, who’s a chef, is willing to eat anything…. Well, as long as it’s not fruit. I guess we all have our limits! 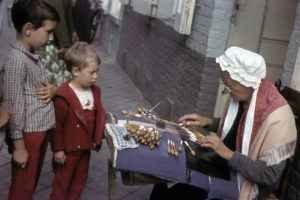 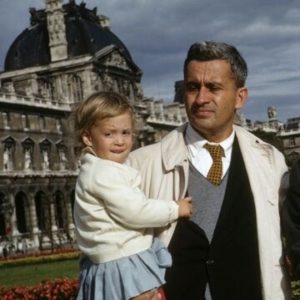 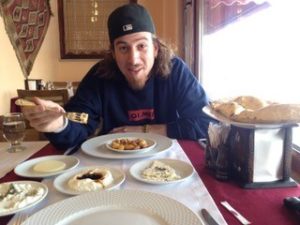 Josh traveled to Turkey with me.