The last two years of Vincent van Gogh’s life were his most prolific.  He lived in three different towns during this time, Arles and St. Remy (in Provence), and Auvers-sur-Oise(Normandy).  I have had the opportunity to visit these three locations.  I enjoyed the insight these unique places brought to my understanding of Van Gogh and his work.
“Garden at Arles” by Vincent van Gogh, 1888, Oil on canvas.
On February 20, 1888 van Gogh moved, from Paris, to Arles in the south of France.  He was attracted to the countryside, calling it  “The land of blue tones and gay colors”.  Funded by his brother Theo, Vincent moved into the now famous “Yellow House” and set up a studio and a room for a guest artist. 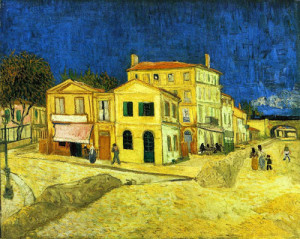 “The Yellow House” by Vincent van Gogh, 1888, oil on canvas.
While in Arles van Gogh was inspired to paint the local farmhouses and gardens.  His paintings from this period feature confident impasto brushstrokes and a brilliant palette.  Indeed, van Gogh wrote “Ah, these farmhouse gardens with lovely big red Provence roses, the vines, the fig trees; it’s quite poetic.” 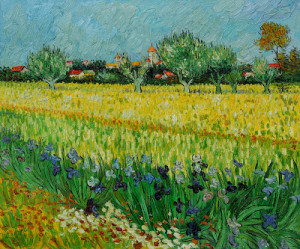 “View of Arles with Irises” by Vincent, van Gogh, 1888, oil on canvas.
On October 23, 1888 Paul Gauguin  (1848-1903) arrived and stayed with Vincent. Together the two artists painted, and unfortunately argued. During the two months they lived together unrest grew between them. On December 23, 1888, after a confrontation with Gauguin, van Gogh mutilated his left ear with a razor.  Van Gogh was admitted to the Hospital in Arles, as Gauguin fled for Paris. 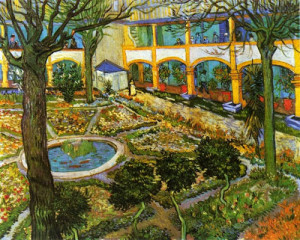 “Courtyard at the Hospital at Arles” by Vincent van Gogh, 1888, oil on canvas.
While at the hospital van Gogh did two paintings of the lovely flower filled courtyard.  After being released from the hospital van Gogh returned to the yellow house, but due to demands from locals he was forced to leave the city.  In February 1889 van Gogh moved 15 miles northeast to the asylum of Saint-Paul-de–Mausolein St. Remy.  It was here that he would create his most inspired works including “Starry Night” and the “Irises”.

Courtyard of the Hospital in Arles as it is today, photo by Marie Dauenheimer, 2013.