The Hidden Universe by Alexandre Antonelli is a short and powerful book.  I was asked to provide pen and ink illustrations, and had the absolute luxury of reading the whole book before lifting a pencil.  This may not sound unusual to you, but in all the years I’ve been illustrating books, it’s only the fourth time I’ve read the manuscript ahead of publication (in the summer, but feel free to pre-order the book). 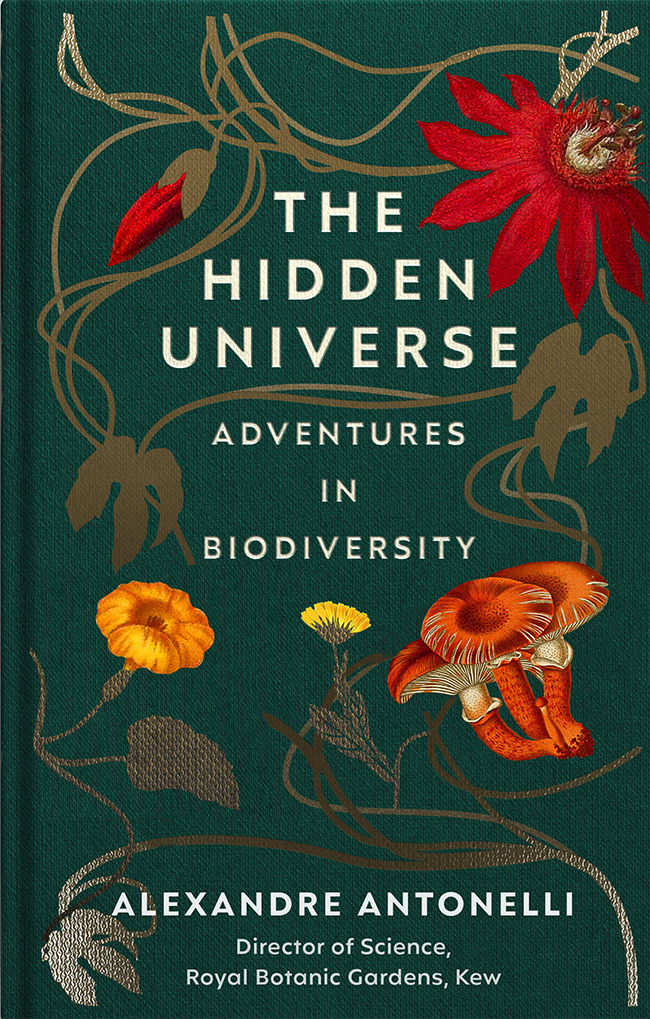 Cover of The Hidden Universe (not my artwork)

Alex discusses the importance of biodiversity from a genetic to an ecosystem level.  He talks about the impact and importance of the climate emergency, and presents the reader with lots of entirely new examples to ponder.  The book is full of optimism too, detailing what we can all do, and what is already being done to wrestle back our planet into a salvageable home for all of life.

I got a detailed list of illustrations.  There were about 20 on the list, and between me, Alex, and the art director; we whittled it down to around 14.  This was surprisingly easy, and all my favourites are included.

The subject matter for the illustrations is extremely diverse, and often challenging.  Some are simple, such as the extremely rare Cretan orchid Cephalanthera cucullata.  Others have multiple elements. like the hedgehog in a log-pile.  Three are extremely complex (Wolves back in Yellowstone park, Beaver in Tierra del Fuego, and Rocky shore zonation.

I drew up all of the illustrations in pencil, and was delighted when the returned feedback was overwhelmingly positive.  I was especially relieved about the three toughest ones.  The background skyline of one needing altering, but none of the animals did. 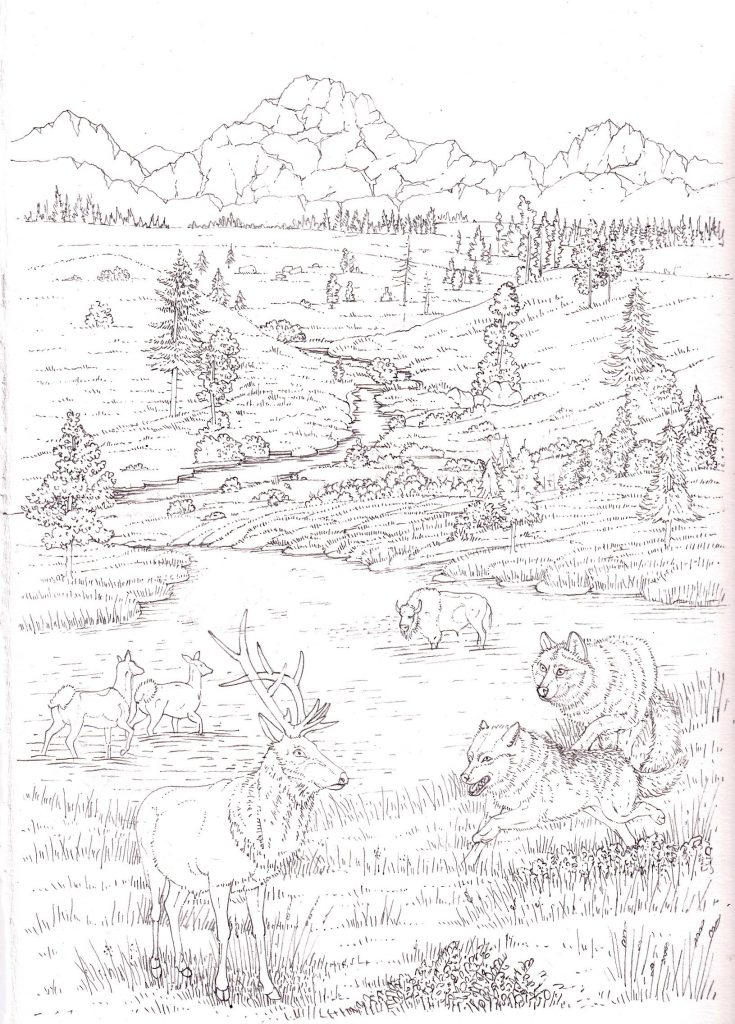 One illustration, the extinct Thylacine or Tasmanian wolf was a matter of choice.  I provided two pencil roughs for Alex to contemplate.  He chose the one he feels is more engaging, the top one. 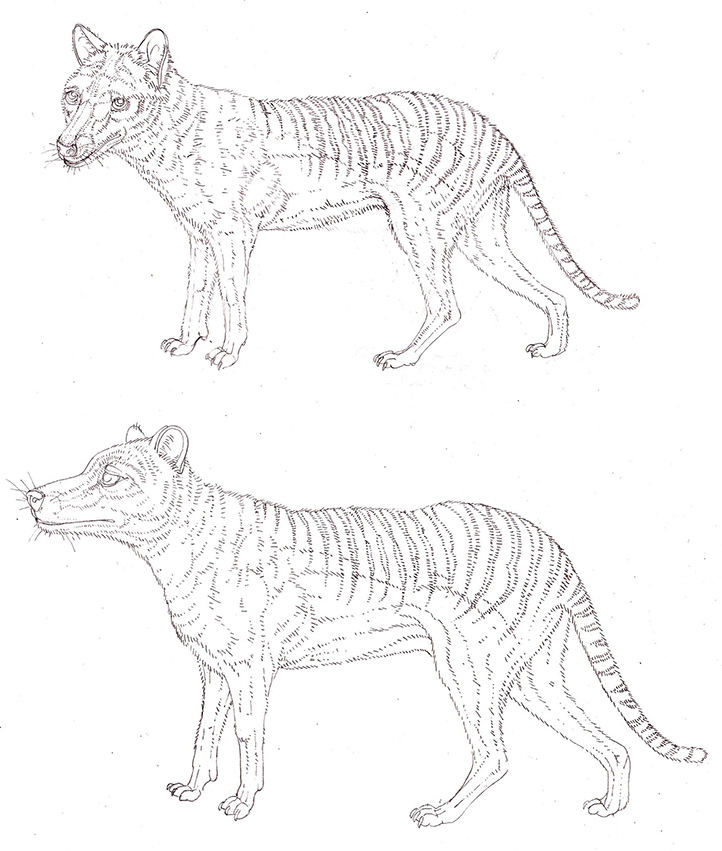 Below is the final inked up version. 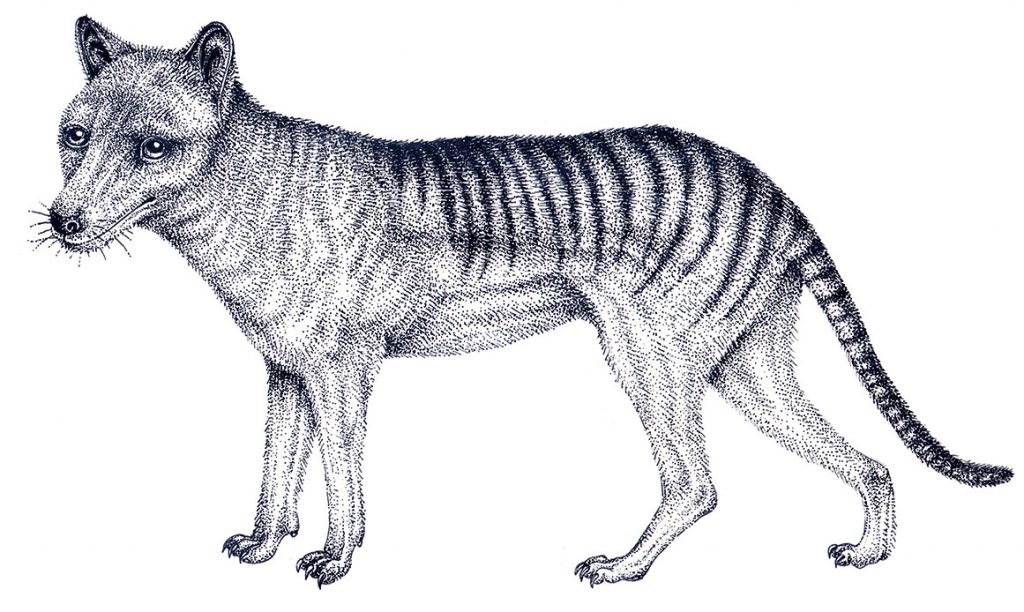 The Hidden Universe: Yellowstone and Re-wilding

Instead of listing the illustrations I did for this project, or discussing the drawing process; I’m going to talk about a couple of them in detail.

First up is the rough I’ve posted above, Yellowstone national park, and re-introducing the wolf.

In the illustration below, a wolf pack hunt an elk.  Behind is the craggy landscape of Yellowstone national park, and (importantly) lots of trees.  There are more deer in the background, and a bison.  This illustration illustrates two ecological concepts.  The first is re-wilding. 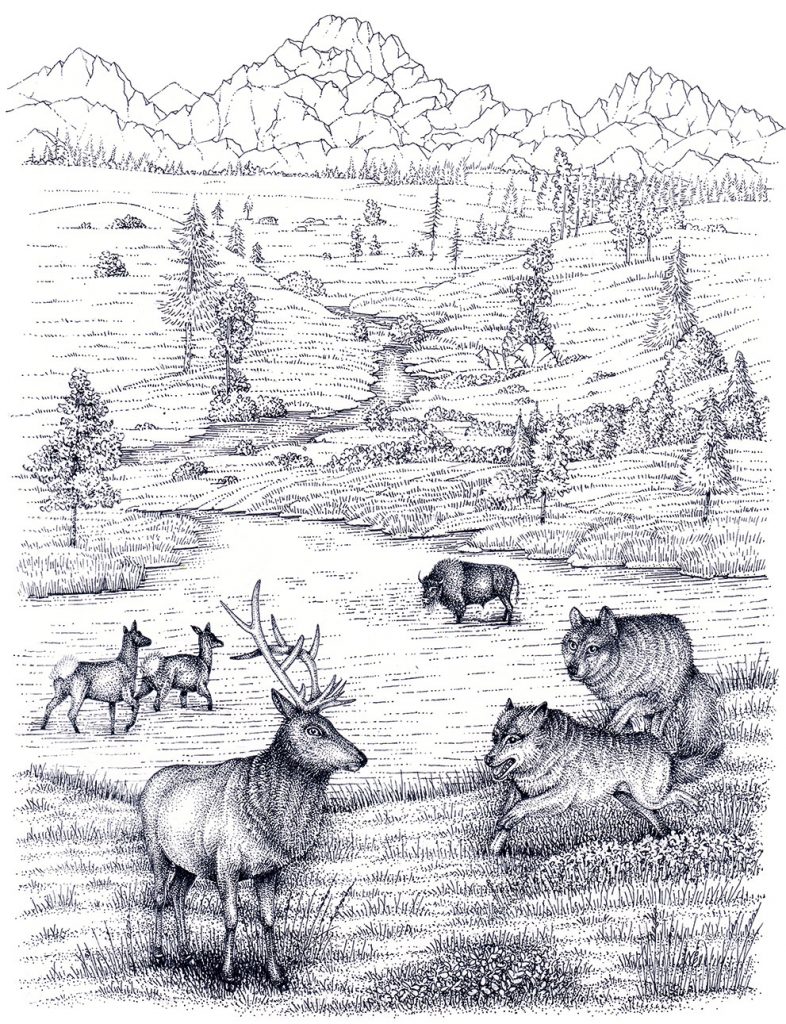 By re-introducing wolves to the park, you balance the deer population.  Less deer means less grazing on young trees.  More trees means more birds and other associated wildlife.  More wildlife means more recycling of nutrients in the ecosystem.  It’s a healthier place to be.  I first read about this example years ago in George Monbiot’s Feral.  I never thought I’d have to try to explain the story in an illustration!

The second concept is linked.  It relates to the idea of keystone species and a biological or ecological cascade.  Some species are vital and make the whole web of life in a habitat work well.  Take one species out, the keystone species, and the whole natural system collapses.  This happened in Yellowstone.  All the wolves were hunted or removed by man.  Remove a top predator like the wolf from a system, and it can trigger what’s known as a trophic cascade.  Too many deer, not enough trees, no associated wildlife…the system collapses.  It’s  why the re-introduction of wolves to Yellowstone is so exciting (and so very successful).

Another of the illustrations involving a lot of work was the beaver dams in Tierra del Fuego, an archipelago off the coast of Chile and Argentina.

Fifty Beaver Castor canadensis were introduced here by man in the 1940s.  (Introduced species are almost inevitably introduced to very new and far-flung location by man).  The theory was that they would breed, and a fur industry could be established.  They began to do what beavers do.   Breed.  Fell trees, and build dams.  The dams create large pool and alter the water courses. 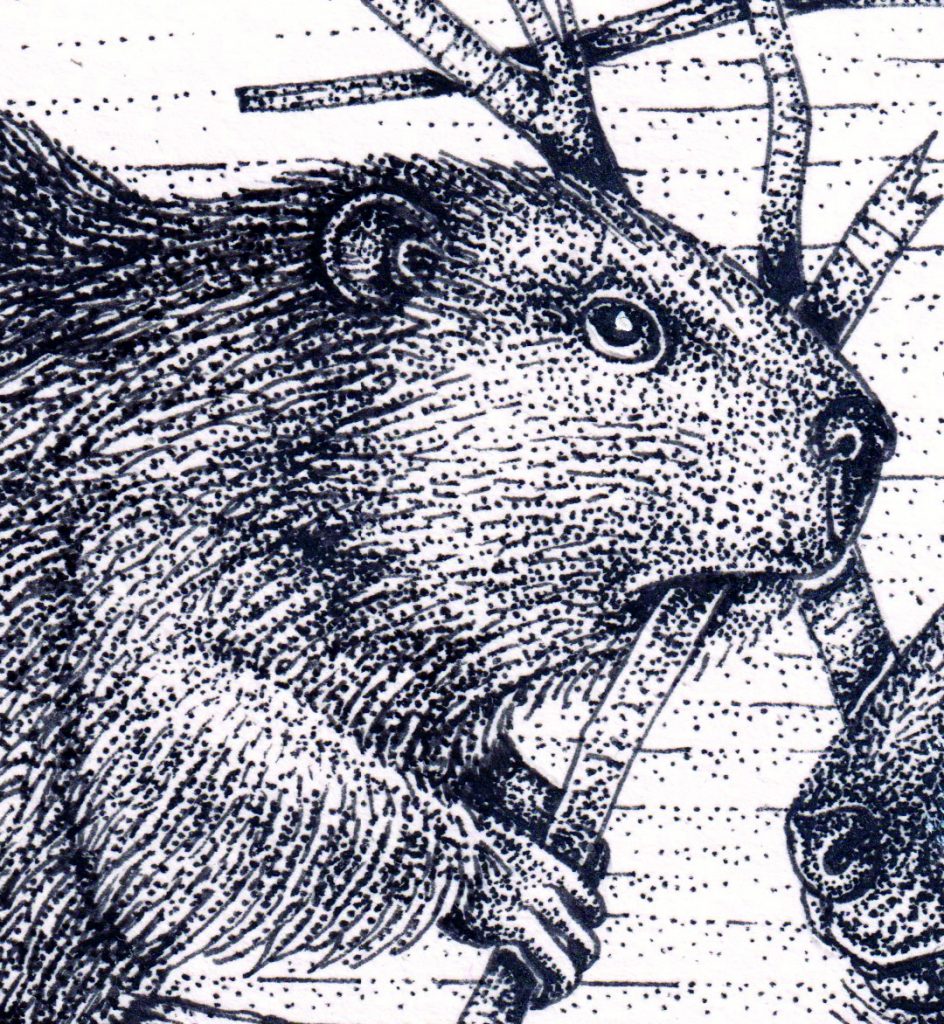 Close up of a Beaver

In many places, this is totally beneficial.  Beavers have recently been re-introduced to Devon, in the UK.  Their landscaping has had massive and many unexpected benefits to the local area.  Flooding is less.  The slower flowing water creates new habitats and havens for wildlife.  Even the water quality is improved as the dams act as filters.  For more, read about the Devon beaver re-introduction here. 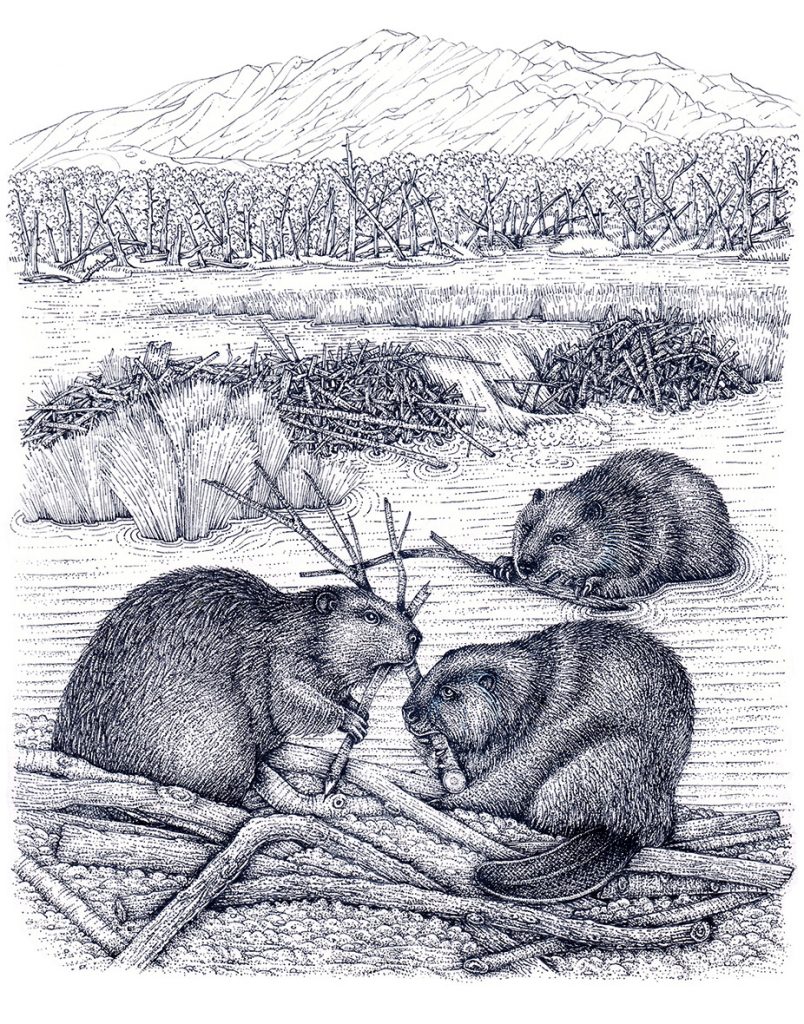 Why Beavers in Tierra del Fuego did not work out

However, Tierra del Fuego is a closed system.  This means there are only a limited number of trees, and as it’s an archipelego of islands, new colonising species are infrequent.

The beavers have no natural predators here, so have bred very successfully.  In Canada, where they were imported from, wolves and bears prey on them.  By 2011, there were estimated to be 200,000 beavers in the area. (NPR 2011)

Problems include flooding, which damages other vegetation.  Trees in South America did not evolve alongside beaver (in the UK, beavers were present until only a few hundred years so, so there was co-evolution).  These trees die rather than regenerate when coppiced by beaver.

Many of these trees are protected species.  Many are already dead or dying.

The resulting chaos and scenes of devastation mean that a cull is almost inevitable.  As Professor Anderson,  from the Universidad de Magallanes, says, “The change in the forested portion of this biome is the largest landscape-level alteration in the Holocene — that is, approximately 10,000 years” (Nature 2008)

It is not an edifying example of man interfering in nature.

Hidden Universe: Hope and A Hedgehog in a log-pile

The last illustration I want to talk about is the hedgehog in the log-pile.

This image comes from a lovely section of the book.  Alex fills the pages with suggestions of what we can do to save what we have.  Examples of things that are already being done. 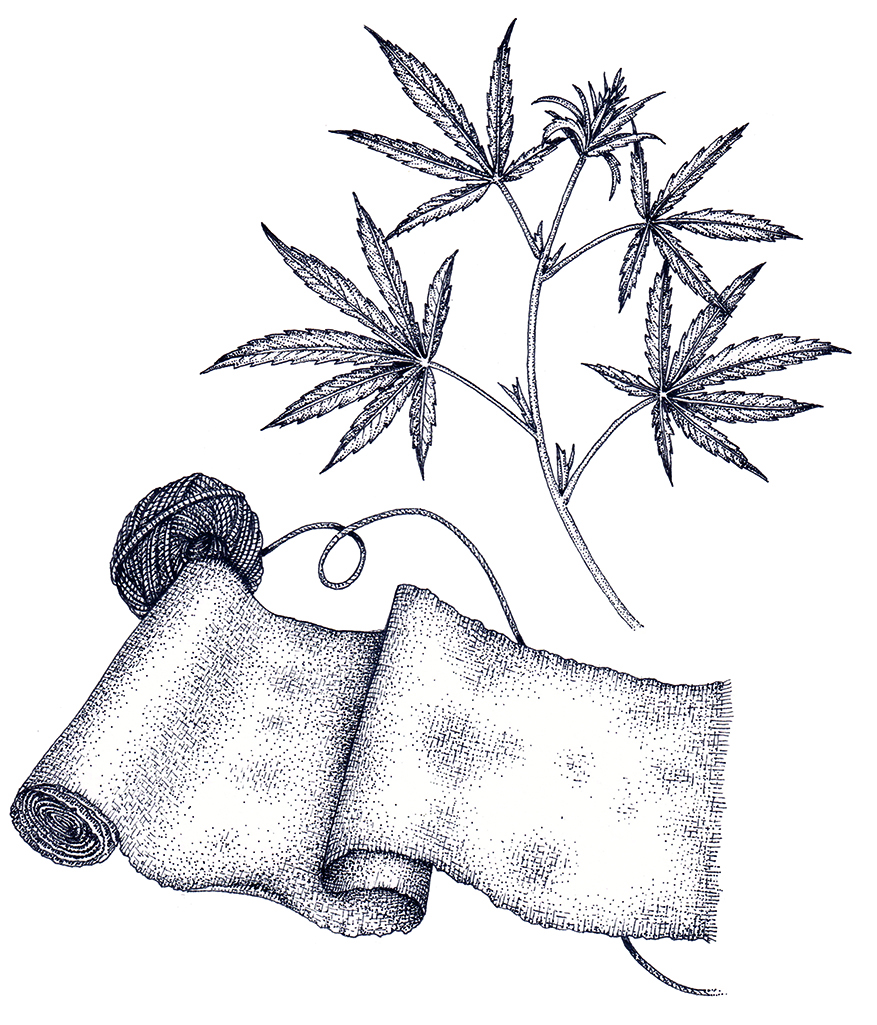 How making cloth and ropes and twine from hemp is a really good alternative to cotton.  The plant is far less water-hungry, and farming it can be much more ethical and ecologically sound.

Fungus, the solution to a whole lot of problems.  It can (and should) be further exploited for food resources, but has other applications such as the building trade (see my guest blog on this from years ago for more). There are lots of other examples.  Some I illustrated, some I didn’t.  All gave pause for thought, and many gave hope.

Hidden Universe: A Hedgehog in a log-pile

Which brings us onto the hedgehog.  It’s drawn by a mouldy log pile in amongst long grass.  Nettles and ivy are established.  To a traditional gardener, it’s a messy scene. 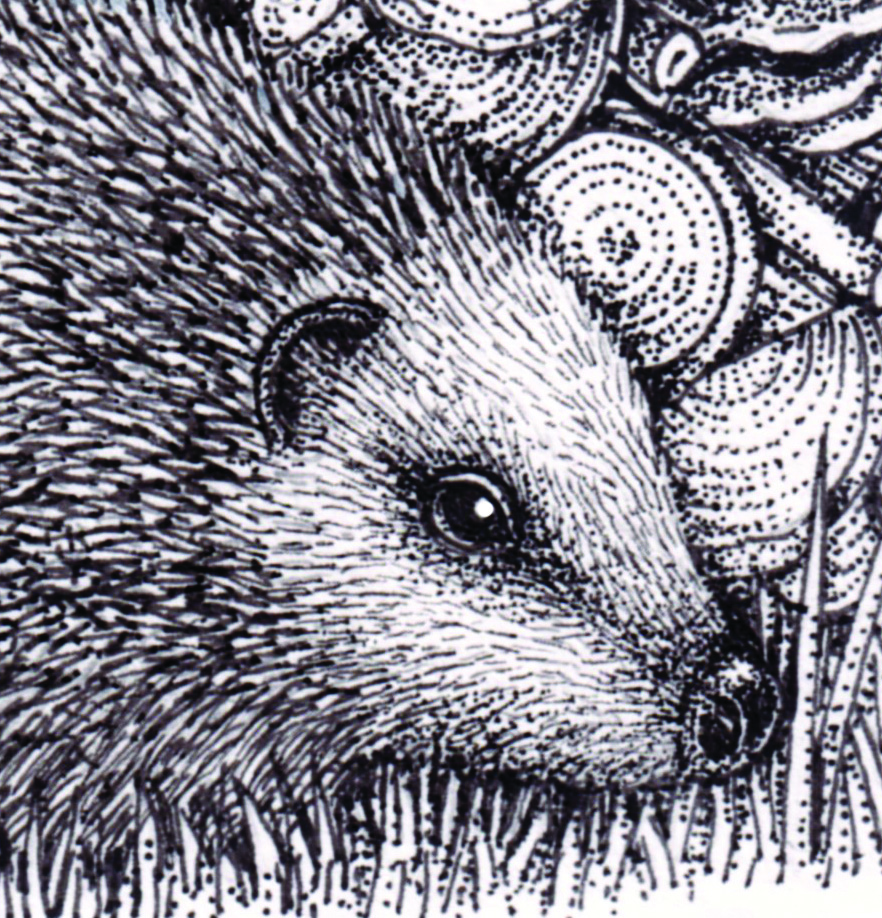 This illustration shows how easy it can be for a lone individual to do something small, but which makes a tangible difference.  Allow a corner of your garden to get overgrown.  Don’t pull up nettles.  Leave a few logs and sticks in a corner.  Let the grass grow long.  leave the area undisturbed.

You may find you’ve made the perfect home for a hedgehog. 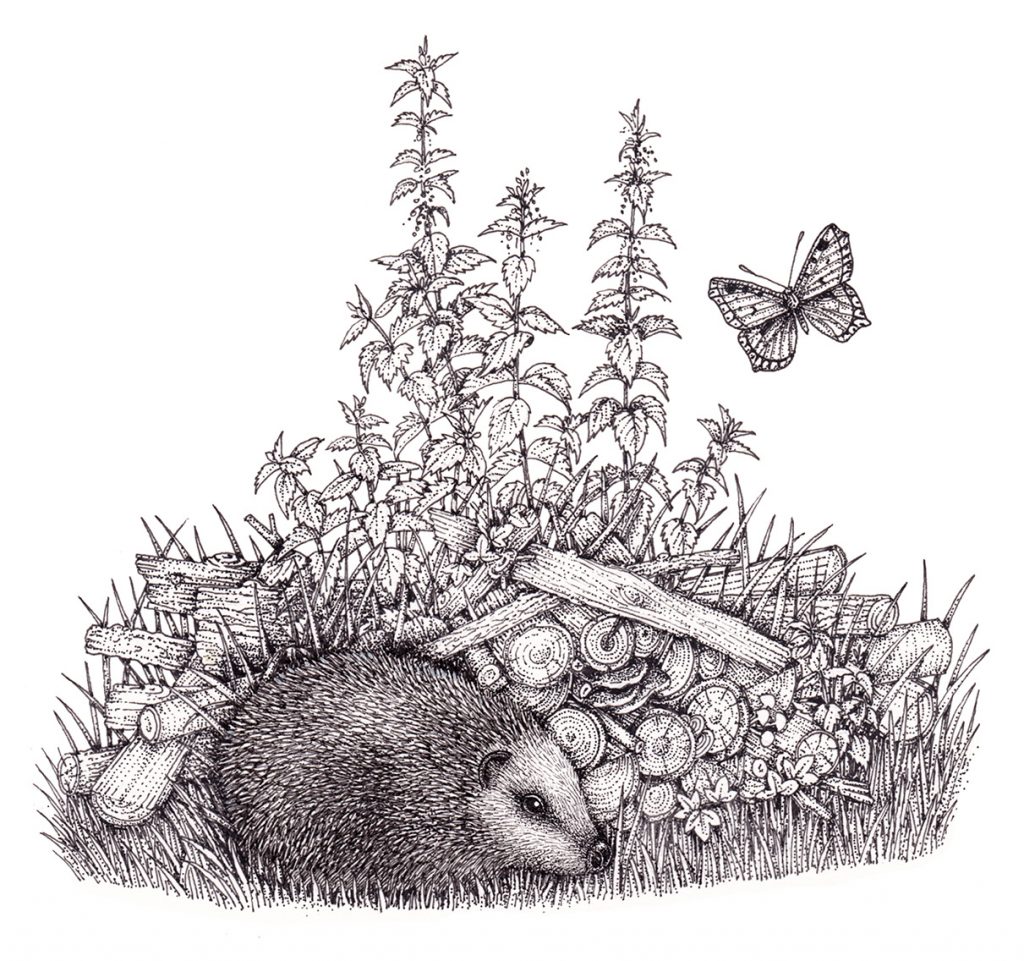 Even if not, the longer grass is wonderful for insects, spiders, harvestmen.  In turn, this is beneficial for the small mammals that feed on them.

Allowing nettles to grow provides food for caterpillars of both the Small Tortoisheshell and the Peacock butterfly.

The logs themselves allow all sorts of fungus and bracket fungi to thrive, which in turn breaks down the wood and helps return the nutrients to the soil. 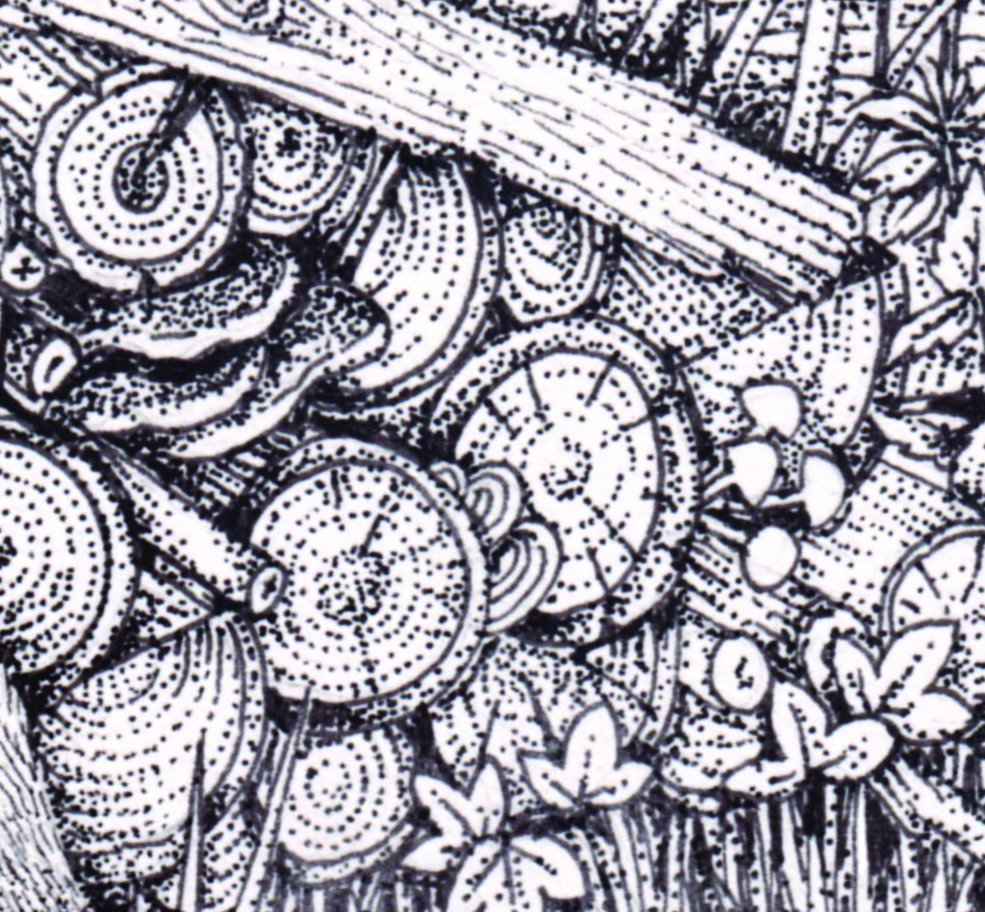 It’s all so good.  And all so easy to do.  Wildlife gardening (for this is what we’re talking about here) doesn’t have to be difficult.  It can be as easy as letting a corner get overgrown.  And the benefits to the entire ecosystem are enormous.

So there you have it.  The tale of three illustrations from The Hidden Universe.  It’s a book that’s well worth reading, not least because it doesn’t end up filling one with a sense of apocalyptic dread.  There are things to do, and things being done. It also shows how enormously fortunate I am to have the job I have.  Every illustration I do entails some learning.  Sometimes it’s botanical details.  Occasionally it’s how to reconstruct an extinct animal.  This time, it was both of these; and how to illustrate entire ecological systems and concepts.  Does it make my brain ache?  Yes.  Do I love the learning?  Yes, indeed.  Am I the luckiest illustrator on the planet?  Well I might be biased.  But I reckon I could easily be.

For an extended look at another of the Hidden Universe illustrations, the zonation of a rocky shoreline, I plan to produce a detailed explanation in a future blog. 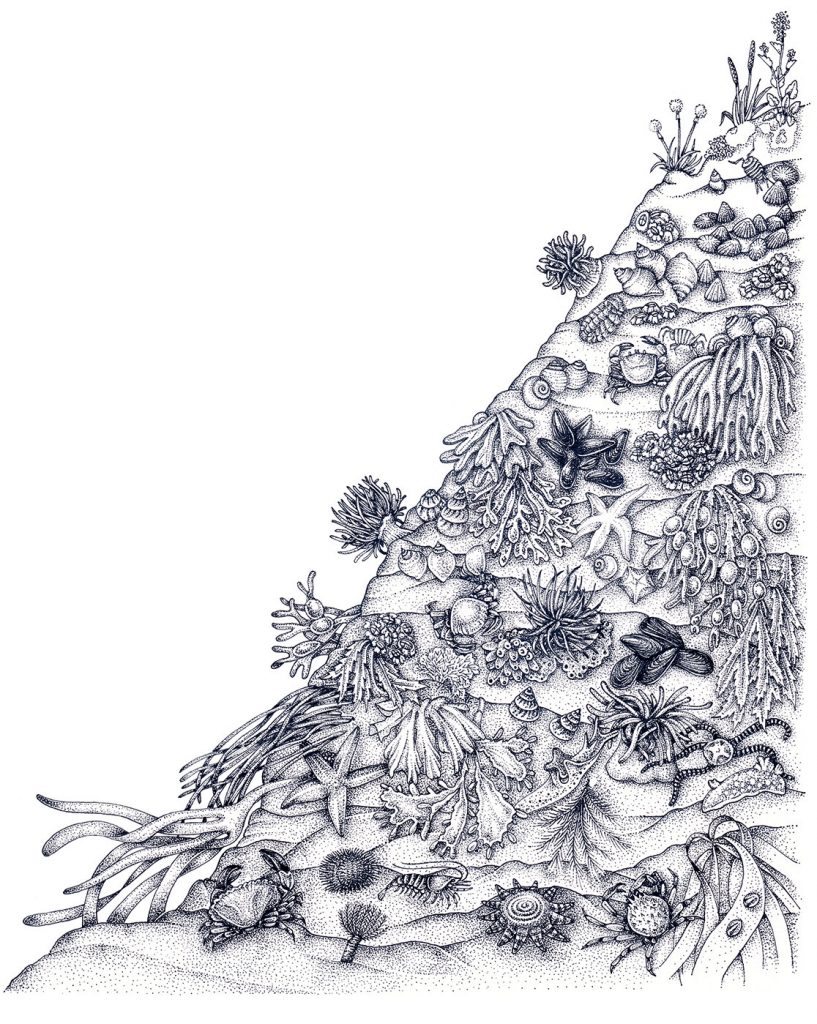