The Brecknockshire flora is written by John Crellin and Mike Porter, and is a detailed overview of the plants growing in Brecknockshire, along with their geographical distribution.  It covers everything from Charophytes through eudicots, and most things in between.  Although it will be, when completed, an academic volume aimed at botanists, the authors are keen to make sure it’s also visually appealing.

This job was a challenge, and also a very flattering commission.

John sent me the working document, along with a list of suggestions of what plants he and Mike would like included.  So far so good.  Ideally, it’ll be one illustration as a heading for each chapter.  Different chapters discuss different informal classes of plant.  So the species list was, as John put it, “Pteridophytes, Gymnosperms, and Angiosperms but certainly, if we can, splitting Angiosperms into Pre-dicots, Eu-dicots and Monocots. If possible then Pteridophytes should be split into Lycoptytes, Calamophytes and two classes of Fern.”

Each of these informal classes requires one illustration to represent them, and their most prevalent or importatnt members in the county of Brecknockshire.

The Challenge of the layout

However, the spaces envisioned for the illustrations were really tricky.  Most plants grow vertically, therefore a good layout would be portrait format.  For the flora, almost all needed to fit into a long, thin, horizontal box. 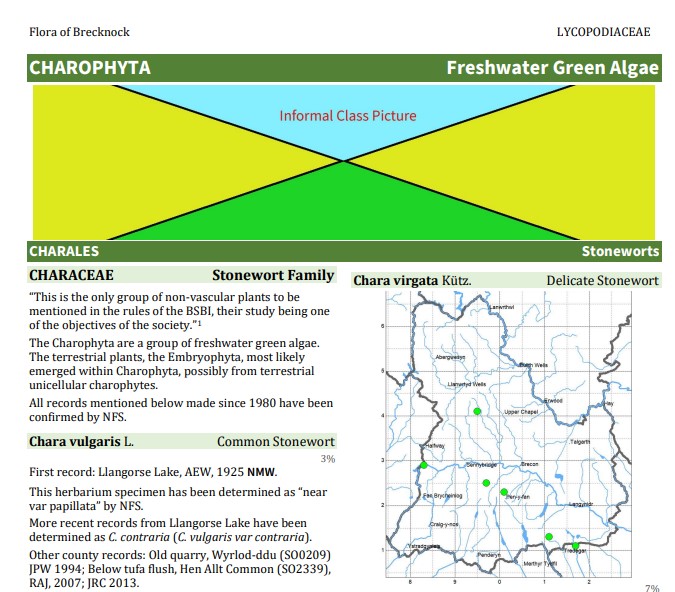 For some species this wasn’t too tough.  Any aquatic plants can be illustrated floating.  Other ways to tackle the problem include showing two plants from the same class next to one another, as I did with the waterlilies.

John was excellent in his support when it came to researching species. Many of the plants were familiar, so I could easily get good reference myself.

But some, such as the stonewort and hornworts were rather more challenging.  He lent me reference books and pointed me to many useful sites where I could access both written information and illustrations and photos.

Pinpointing the differences between species of Mare’s tail, Equisetum, was also tough.  For this image, we had three Equisetum in the image, from those favouring wet habitats to those liking it dry.  So a combination of habitat preference and plant i.d.

The process of completing the illustrations

As always, before adding colour to the illustrations I sent over pencil line drawing roughs.  If these are given the go-ahead, it’s just a matter of adding colour.  However, submitting them at this stage allows changes to be made without too much impact.

There were a few changes, mostly in a very complicated illustration used for the chapter opening of the “Ferns” section.

John needed several ferns in one image, growing from a stone wall.

On seeing it he decided to tweak the species, and asked the wall to be moved to an angle, with the ferns along it.  The smallest fern would be closest to us.  the largest, the bulky Shield fern (a replacement for the Male fern), was to be at the end of the wall.

Although this was an improvement, John wanted to include tree ferns.  He asked the Polypoidy ferns to be moved into a tree, and to be replaced with Wall rue.  So I had one last crack at it.  By this time I was starting to feel a little desperate.  I don’t really love painting ferns even at the best of times as they’re so fiddly (see my blogs: Illustrating Bracken and ferns and Illustrating Lower plants in a churchyard) so these re-draws were exasperating.

This time we had success, and I could go ahead and get some colour onto the illustration.  Even this was challenging, trying to suggest the ferns growing in a distant tree was difficult, and I got quite lost in amongst the greys of the stone wall.

There was so much variety in this job.  Illustrating The Brecknockshire flora was a lot of fun.  Along with the waterlilies (shown above), another of my favourites was the Cuckoo flower Cardamine pratensis.

Luckily, this one is the county flower for Brecknockshire, and was allocated a full page.  And a portrait format!

My other two favourites were definitely the assortment of plants that featured in the Eudicot and Monocot chapters.  They were such a joy.  Lots of variety, and I got to play with composition.  I even germinated my very own seedlings to be sure I got the details right.

The Eudicots were equally fun, although tougher because of the venation on the leaves.  This isn’t normally a challenge, but when the illustration is very small it becomes rather finickity.

Illustrating the Brecknockshire flora was a great job.  There was the perfect mixture of easy bits and challenges.  It made me think, both botanically (getting the plants right) and artistically (sorting out that challenging format).  It also taught me a lot more about the plants that grow in my county.

I very much look forward to seeing it published next year, both as a book and as an online PDF.

The post The Brecknockshire Flora appeared first on Lizzie Harper.