"Matisse, In Search of True Painting” at the Metropolitan Museum of Art

"Matisse, In Search of True Painting” at the Metropolitan Museum of Art

In 1949 art critic Clement Greenberg wrote of Matisse “A self assured master who can no more help painting well than breathing.”  Indeed when I look at Matisse’s paintings they show a confidence and bravado in the brushwork, colorful palette and composition.  It was surprising to learn that painting never came easy to Matisse who “reworked, questioned and repainted”.
Still Life with Compote, Apples and Oranges by Henri Matisse, 1899
The exhibition “Matisse: in Search of True Painting”, at the Metropolitan Museum of Art , explores how Matisse used his canvasses as tools, repeating compositions in order to “compare effect, gauge his progress” and “push further and deeper into true painting.”
By creating multiple paintings of the same subject matter Matisse experimented with different techniques to explore the subject.  He often copied the same image over and over varying the treatment of the canvas and handling of the paint.
In his series of paintings of the “Young Sailor” Matisse used graphite pencil to block in the figure, he followed with black paint to re-inforece the outline.  His final step was to use vivid paint, allowing it to drip and run, to emphasize the two dimensional aspect of the surface. 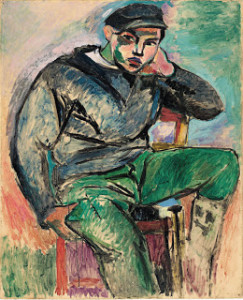 Young Sailor I by Henri Matisse, 1906 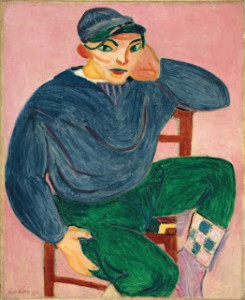 A series of three canvasses of “Le Luxe” dominate the exhibition.  Influenced by Ingres and Cezanne, Matisse sought to convey the essential qualities of his figures.  Using various materials, such as charcoal, distemper (a water based medium with a matte surface like fresco) and oil, Matisse created a dramatic series of figure studies that work independently, but when together create a powerful series that echo the forms of the figures. 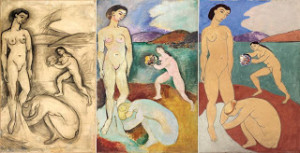 Three versions of Le Luxe by Henri Matisse, the first using charcoal, the second in oil and third using distemper, 1907-08

Another series of paintings by Matisse, highlighted in the exhibition, are of Notre Dame.  They are based on the view from his Paris apartment. “I never tire of it, for me it is always new”.  The series, as you can see moves from a traditional view of the cathedral to one that becomes more abstract.  These later paintings giving way and influencing a new generation of artists seeking “true painting”. 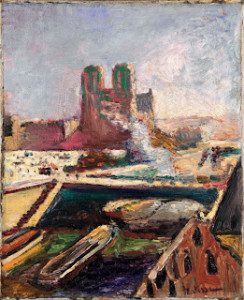 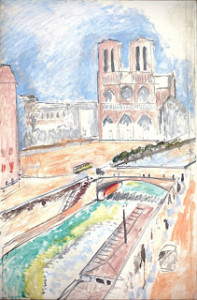 I highly recommend this exhibition which is at the Metropolitan Museum of Art through March 17, 2013.  I also recommend the catalog edited by Dorthe Aagesen and Rebecca Rabinow.