My botanical illustrations and diagrams have recently been published in a book all about Japanese knotweed.  It’s called “Japanese Knotweed: Unearthing the Truth” by Nicolas Seal , and is rather a fascinating tome.  It was a fun job to work on, with a wide range of illustrations needing completing.

The author saw a sketchbook study I’d done of this invasive plant online, and got in touch.  He is managing director at Environet a company which eradicates knotweed.  Nic is a specialist in the field, and knows more than seems possible about this plant. 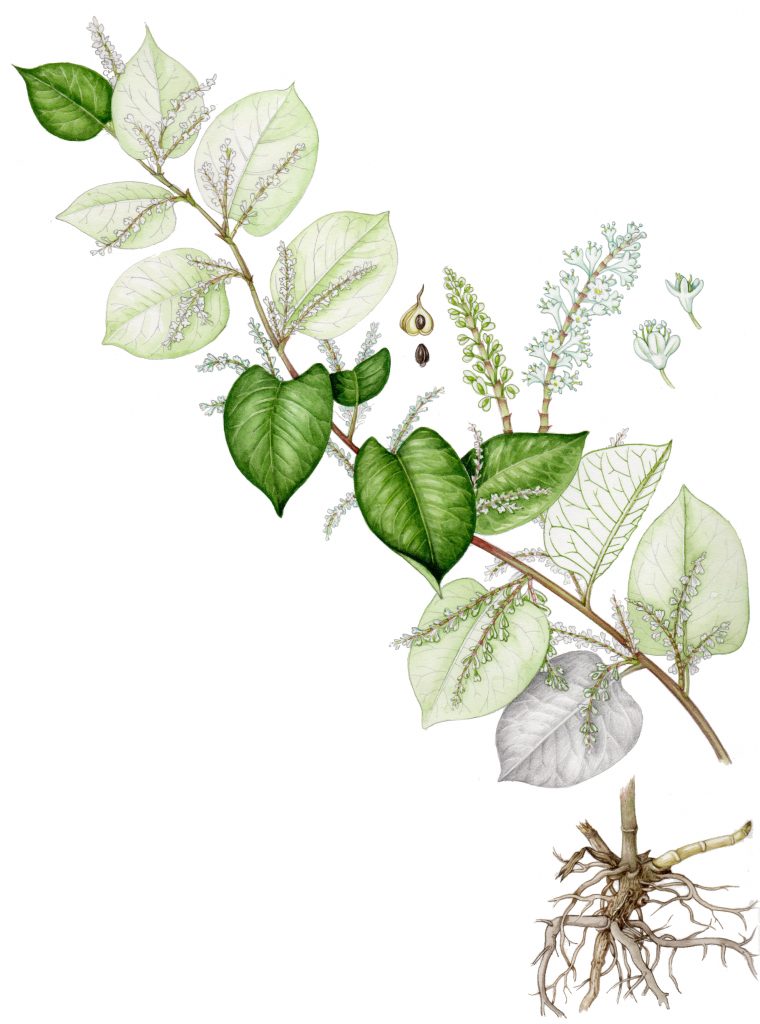 Sketchbook study of the Japanese knotweed Polygonum cuspidatum. For more on this illustration please check out my previous blog.

Deciding what illustrations were needed for the book

I met up with Nic on his boat in London, on a hot summer day.  We discussed his ideas for the book.  Together, we decided what illustrations were needed.  His premise is that the plant is valuable as well as destructive.  Its reputation has as much to do with hysteria and scare-mongering as with botanical truths.  My sort of a story.

There was a need for diagrams as well as botanical illustrations.  Armed with this information, I set off home and began working on pencil roughs.  Many of these were technically complicated, but straight-forward to draw and colour. 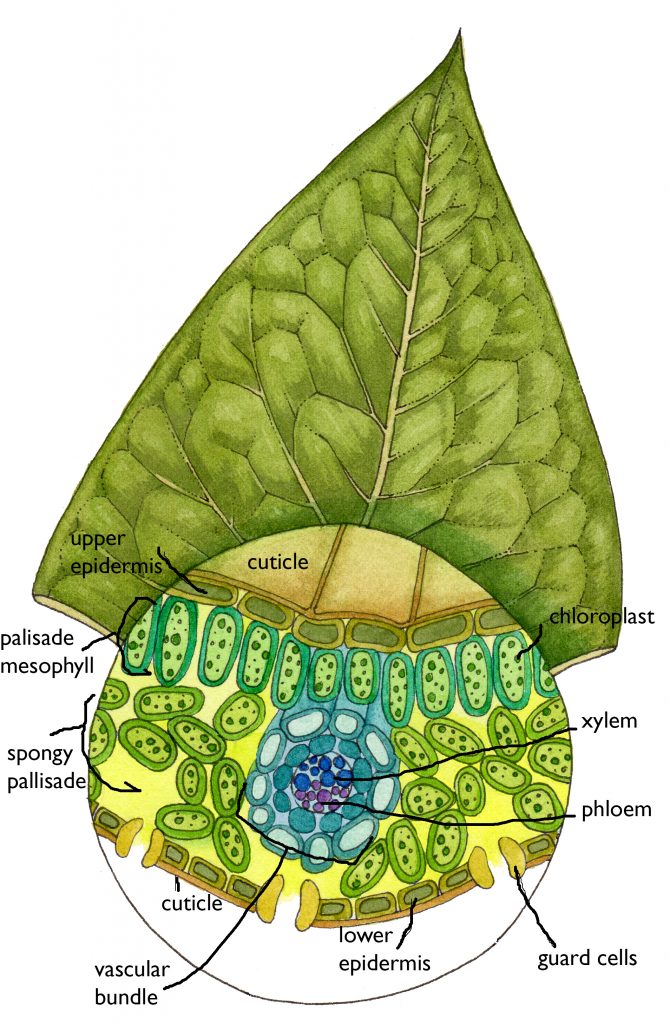 Annotated cross section of a leaf (the annotations are mine, they look better in the book!)

There were some that required a little more thought; although the processes of photosynthesis and transpiration have been illustrated many times for text books and online resources, often these illustrations are not very lovely; I wanted to make informative diagrams that were also visually pleasing, and species specific. 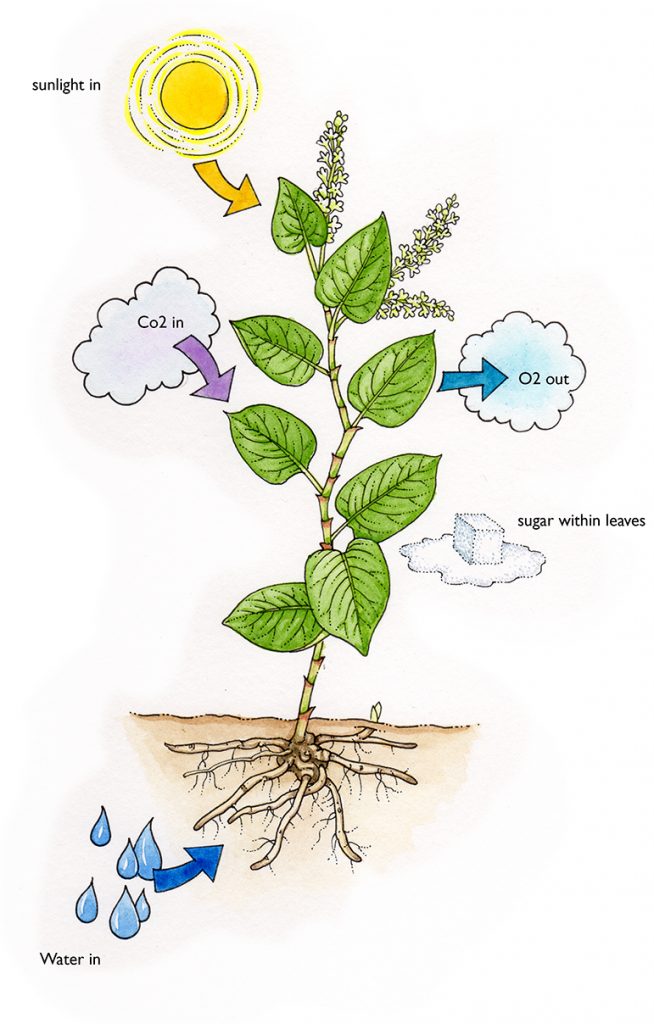 Diagram showing the process of Photosynthesis 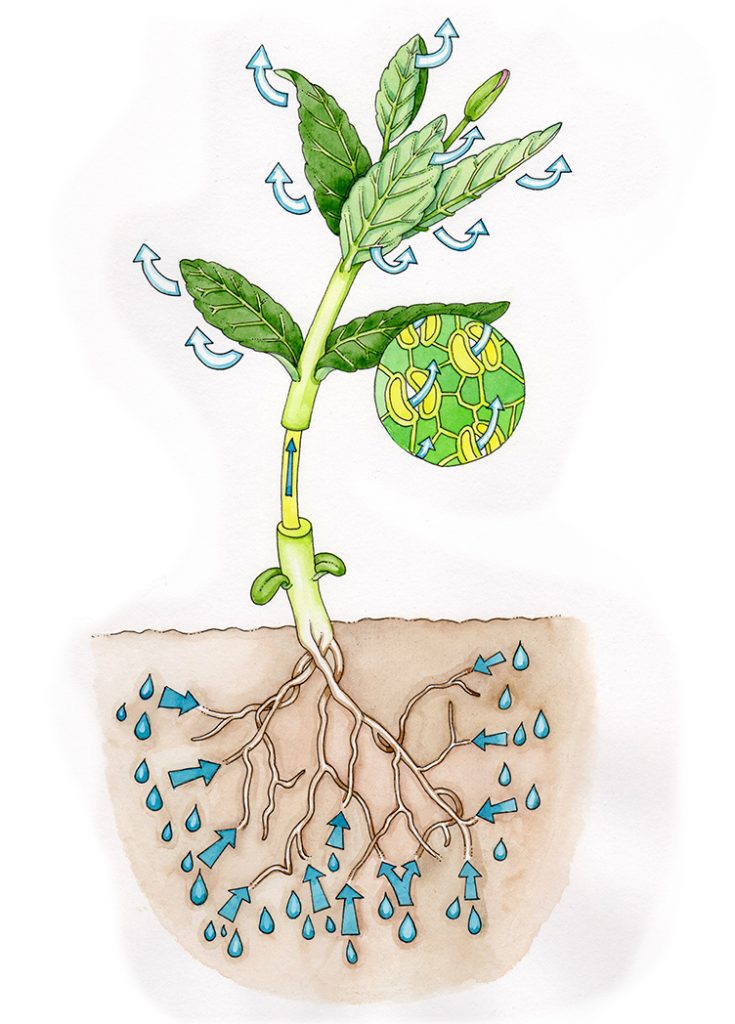 Diagram showing the process of Transpiration

My favourite illustrations were definitely the ones of the plant itself.  I was very taken with the root crown, its little pink shoots and the way it spreads so effectively (this is why it’s so hard to eradicate!) 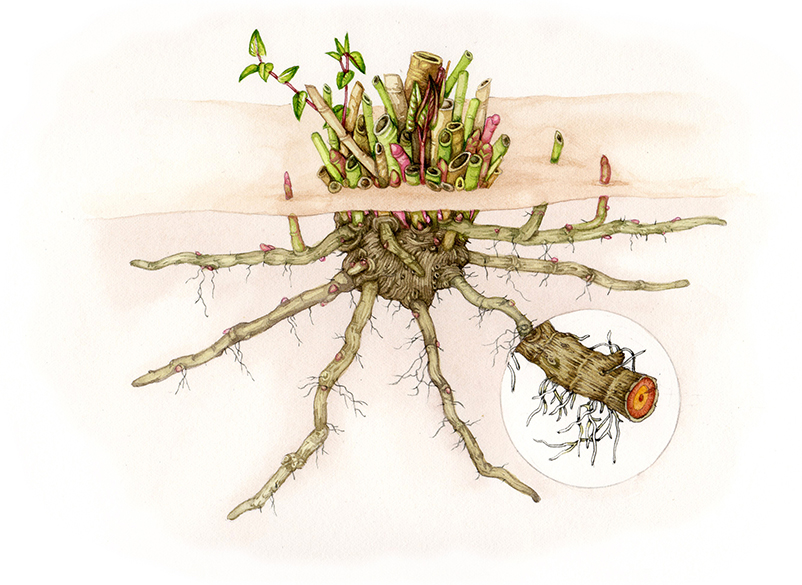 For a full plant portrait of Japanese knotweed, I (obviously) had to get my hands on a specimen to work from.  It’s not as common round us as in other places, but after making enquiries I managed to track down a clump of it to an area of common land just above the neighbouring village of Clyro.

I was in something of a panic as I worked; knowing that it was vital to dispose of all the parts of the plant carefully once I’d illustrated it.  Knotweed can re-grow from tiny fragments, and as we know, once established it can be really tough to get rid of.

For more on the legal niceties of controlling Japanese Knotweed, take a look at Knotweed Help’s article. 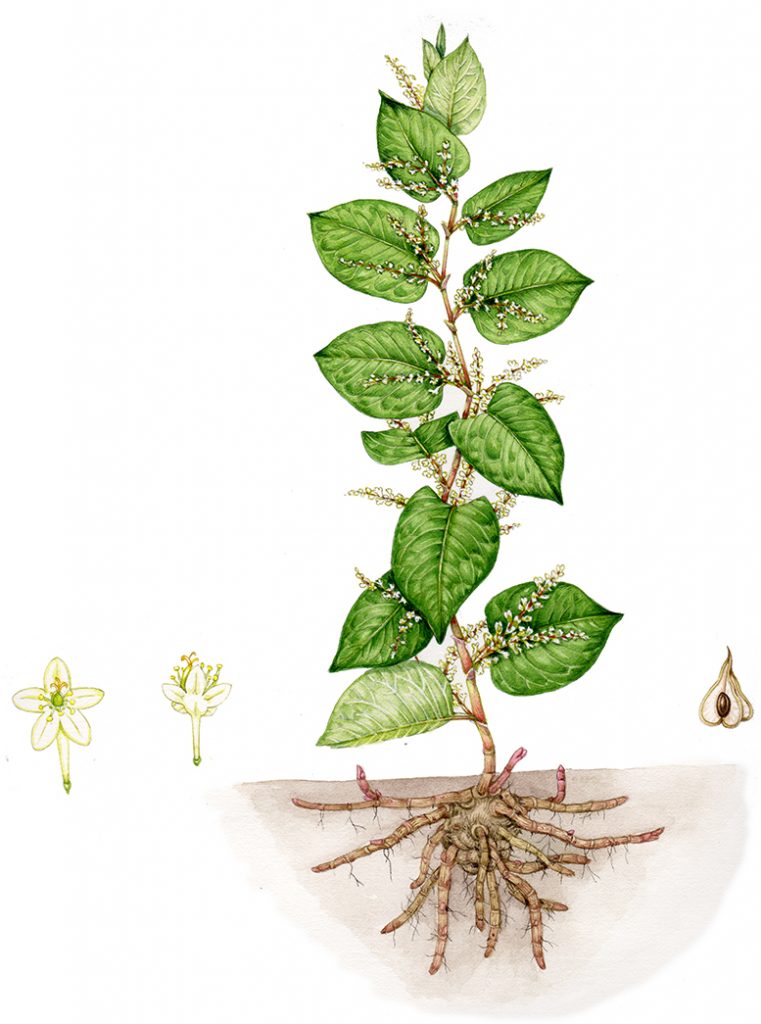 Working from life, the flat leaf bases are really clear, and I could really look at what was going on with the form and shape of the tiny white flowers.  In many ways it’s very similar to the Russian vine, Mile-a-minute Polygonum baldschuanica, and the two had me confused until I sorted out the distinctive shape of the leaves.

The problem of possibly bringing this plant into my own garden was solved by keeping everything in a bag as I worked, and by burning it in the wood-burning stove once I was finished.  I did keep an eagle-eye out for unexpected shoots and seedlings for some months afterwards, however…

Another illustration I loved doing was of the flowering spike, or raceme. 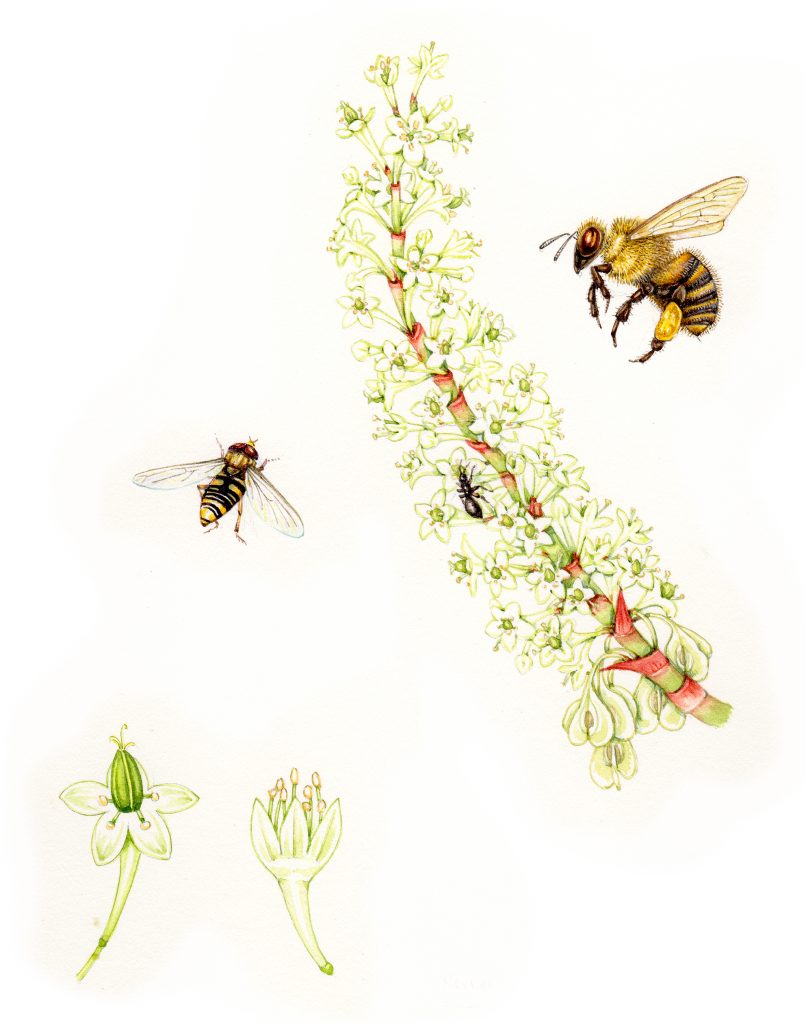 Flowers of Japanese knotweed with a range of pollinating insects

This illustration shows what a wide array of insects visit the plant and how it can be good for wildlife.  Pictured alongside the flowers are a bee, ant, and hoverfly.

Illustrations in the book

When I received my copy of the published book, I was really impressed.  What one might have thought of as a dry subject had been wonderfully brought to life by Nic Seal; his knowledge and passion makes the text fascinating, and a joy to read.  The photos that accompany it are excellent, and the book has a well-produced and classy feel to it; it wouldn’t look amiss on a coffee-table. 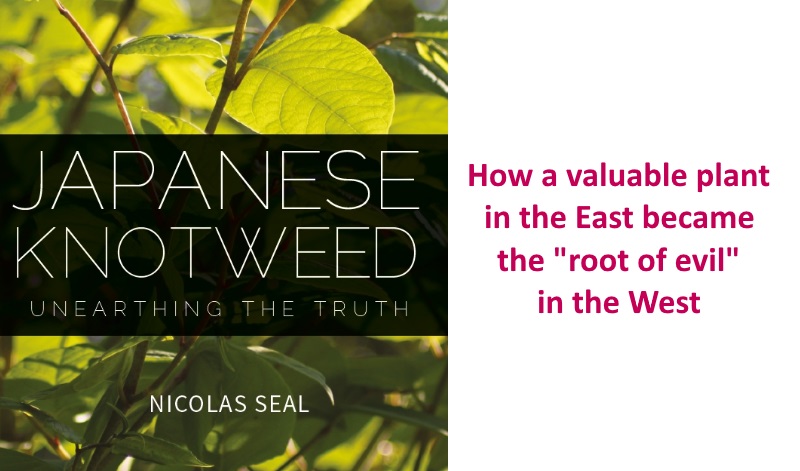 Publicity photo of the cover of “Japanese Knotweed: Unearthing the Truth” by Nicolas Seal

I would recommend this book to anyone with even a passing interest in this plant.  It’s a project I’m pleased and proud to have worked on.