AXS Studio, Inc. is a visual communications company that develops interactive experiences and animations to help translate scientific processes. Generated primarily for pharmaceutical and medical device clients, their content creation focuses on constructing effective messaging for both expert and lay audiences. Through designing visually-stimulating material that allows complex topics to not only become comprehensibly outlined, but also directly experienced, AXS Studio facilitates the transference of educational information between their clients and medical practitioners, patients, investors and other stakeholders. The following showreel offers more insight into how this process works –

AXS Studio’s team of visualization experts provide their clients with newly-developed interactive technologies that facilitate unique, memorable, and informative experiences. As each team member holds a M.Sc. in Biomedical Communications, their combined forces pave the way for revolutionary headway in concept formulation. AXS Studio works with clients in all stages of project development. From pipeline visualization to patient education, their digital renderings aid in both encouraging preconceived projects to blossom and allowing already-established concepts to flourish. The following artwork samples serve to highlight the diversity in their stylistic projects.

The video above highlights the role of the Proteasome in Multiple Myeloma, where AXS Studio’s oncology animation was used to present the proteasome as both a vital tool for healthy cells and a key survival weapon for cancer cells. Basing the structure of the proteasome and its function on data from peer reviewed literature, AXS Studio utilized a warm palette and bright lighting underscore to convey the idea that the proteasome is not a sinister force, but rather an innocuous player in a noxious process. 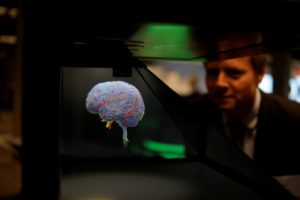 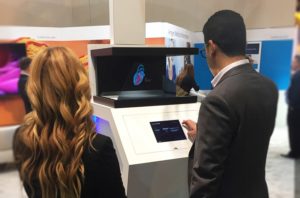 These images featuring the CGRP in a Migraine on the left and a CVD interactive exploration hologram on the right were taken of holographic displays set up in congress booths. As visitors were drawn toward the bright 3D brain and CGRP-receptor complex that appear to float before them in the exhibit space, they were able to engage with a full-length MOD video exploring the role of the CGRP molecule in migraine pathophysiology. When participants approached the CVD hologram, they were able to drive the experience touch screen controls to learn about certain aspects of heart failure. 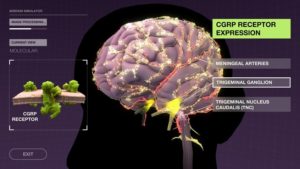 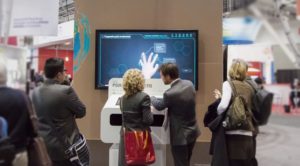 These images showcase AXS Studio’s interactive displays, where the image on the left featuring their MiBrain Photo Booth was used to educate headache specialists on the role of CGRP in migraines through simulating a live scan that tracks a user’s movements. The image on the right of their Psoriatic Arthritis Interactive Simulator lets rheumatologists peer inside their own hands to witness the signs and symptoms of psoriatic arthritis at three stages of involvement.

AXS Studio takes interactive education to the next level, where their simulations and animations are designed to leave memorable imprints on viewers. AXS Studio’s ability to transform conceptual ideas into heuristic experiences paves the way for profound improvements in the ways we understand eduction, science, and medicine. For more artwork samples by AFX Studio, Inc., check out their portfolio.