Many of the medical illustrations and animations that you see every day were created by Bryan Christie. His award-winning images, covering a broad range of topics from microbiology to astronomy, are regularly featured in publications such as Scientific American, WIRED, Field & Stream, Esquire, and others.

No matter the subject, Bryan specializes in turning complex ideas into accurate and unforgettable visualizations. We took a second to sit and speak to him about where his love for art stems from, the process he undergoes to create his work, and what’s coming up next.

Take a look at Bryan’s Medical Illustration & Animation portfolio and his site bryanchristiedesign.com to see a broad range of his work.

How did you originally get into illustration and how did you transition into medical/scientific art?

Both of my parents are artists. My mother is a painter and my father is an illustrator. I started interning at Slim Films, my father’s illustration studio when I was 20 years old. It was one of the first actual 3D illustration studios that did work for magazines. Our clients included names like Scientific American, Esquire, and Popular Science. After working with him for about a year, I took a job as an Assistant Art Director at Scientific American. It was there that I really fell in love with the visual communication of science. I was given articles to design that ranged from physics to the habitats of alligators.

Scientific American is the longest published magazine in the United States and they have a library of all issues since the 1940’s. When I worked there I would spend a lot of my free time at the library looking at the old illustrations. I thought they were gorgeous. The aesthetics of that 160-year period really influenced my illustration style. For me, it wasn’t necessarily about looking sexy, it was more about the communication. What really struck me, particularly in the physics articles, was that these diagrams were a window into a concrete physical truth. That resonated with me and I responded to them (even when I couldn’t understand them). 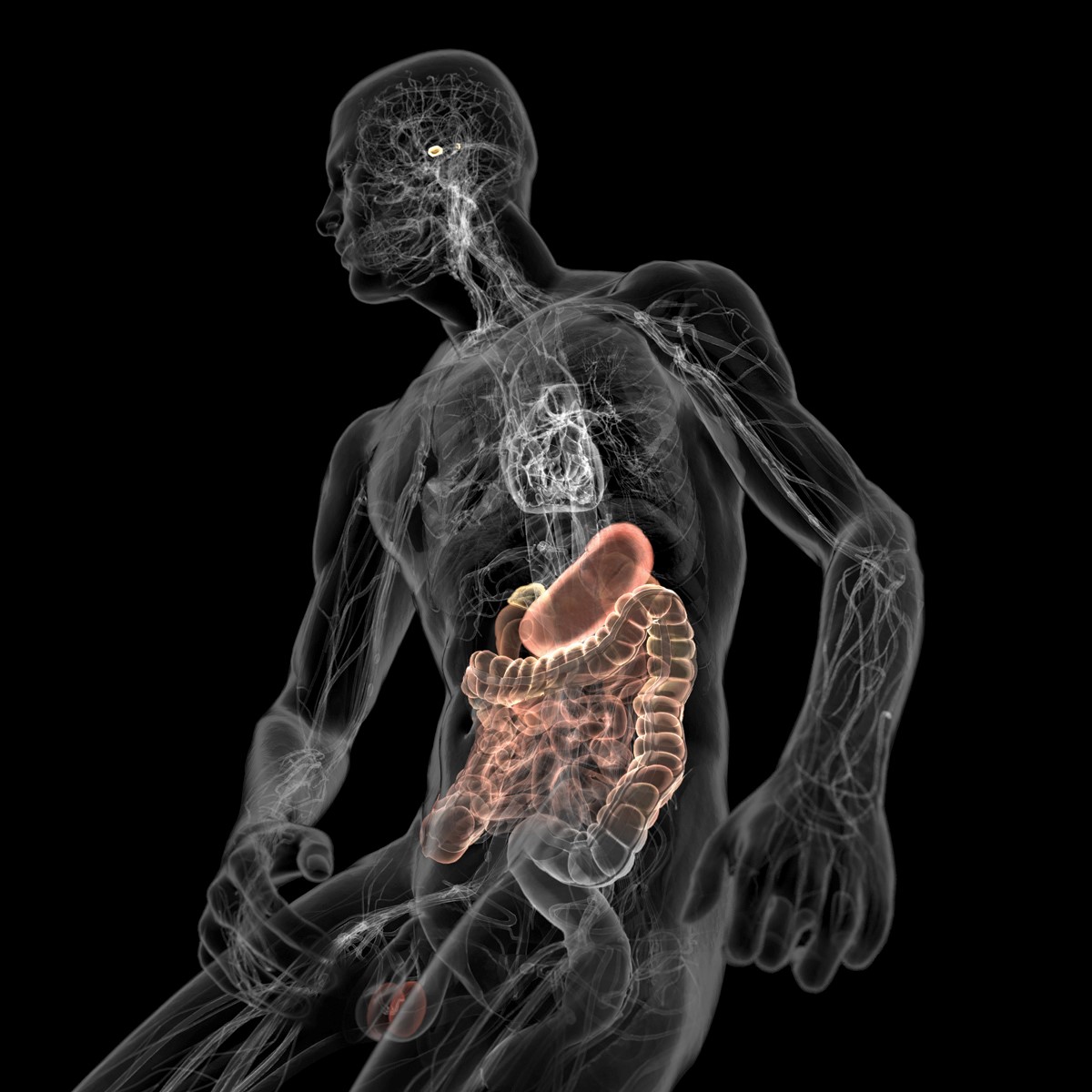 What were some of the most important things you learned at Scientific American? How do you think that influenced your work?

Our work, in particular, is known for being relatively simplified (shades of gray) with certain elements highlighted in a specific color to guide the eye and explain things.  I learned that at Scientific American. Back in the 50’s and 60’s they were really only printing in black &white, adding secondary colors very sparingly to highlight something significant. That understanding profoundly influenced my 3D work in the 90’s.

At that time 3D art was very technicolor-heavy, some may even say it was a bit harsh.  Artists used every color imaginable. When I went back to freelancing in 1999, I started stripping down colors massively.

A lot of people approach 3D as a way of mimicking reality. I’m way more interested in the aesthetics of drawing. It’s a 3D world inside our computers, but the audience views it on a flat plane, more like a drawing.

Mathematicians talk about beautiful solutions, but I really think the beauty comes from the solution. We aren’t drawing something to be beautiful. The beauty is a secondary side effect. 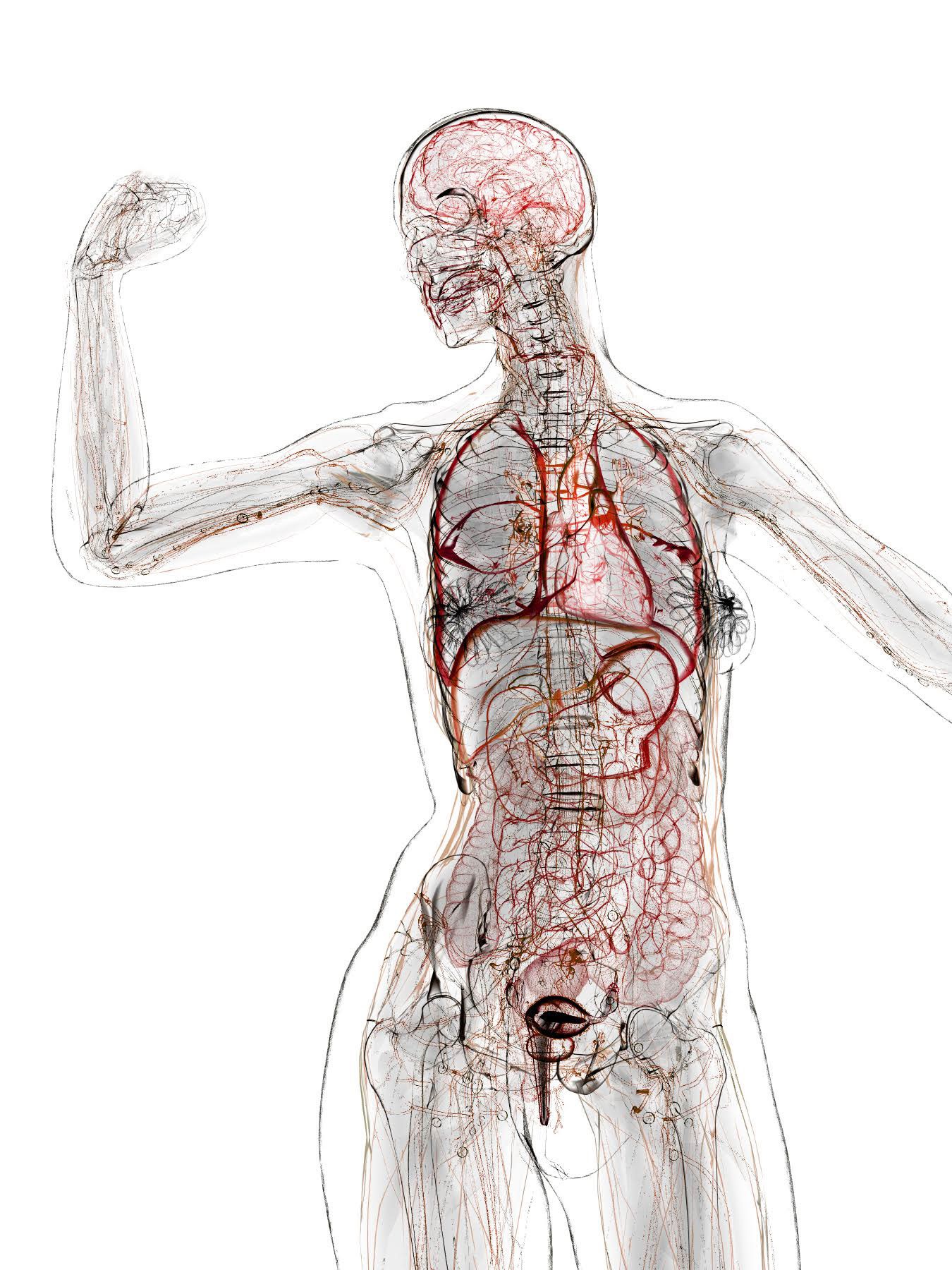 In addition to being a medical illustrator, you’re also a talented painter. What are some of the themes that you explore in your fine art?

I explore information graphics that are all about our corporeal existence: atoms, molecular structure, etc. My artwork has a mental aspect to it. I personally believe that the divine manifests itself in our physical existence. So, I hint at light–the consciousness that’s behind everything, the interplay between our physical selves and our spiritual selves. With my personal work I’m using the same 3D files as in medical work, but working in different layers.

I was extremely influenced by a retrospective at the Whitney in NYC of Mark Rothko, an abstract expressionist. I walked into one of the rooms and just started weeping. It was a profound spiritual experience for me and that’s the ballpark I want to be in. All the art I look at has some sacred component to it; Christian, Renaissance, all forms of spirituality and religion. There are series within my work which are more about just making an object that interacts with the viewer in an interesting way.

12 years ago, I was at the Vatican in Rome with my wife and I saw The Pietà by Michelangelo. Seeing how marble can be used to depict flesh and the spirit was one of the most pivotal moments in my life. It was at that point that I decided to really start making art. If something like that could make me have a profound emotional experience and change my life, that’s what I wanted to be doing. The experience informed my illustration as well. 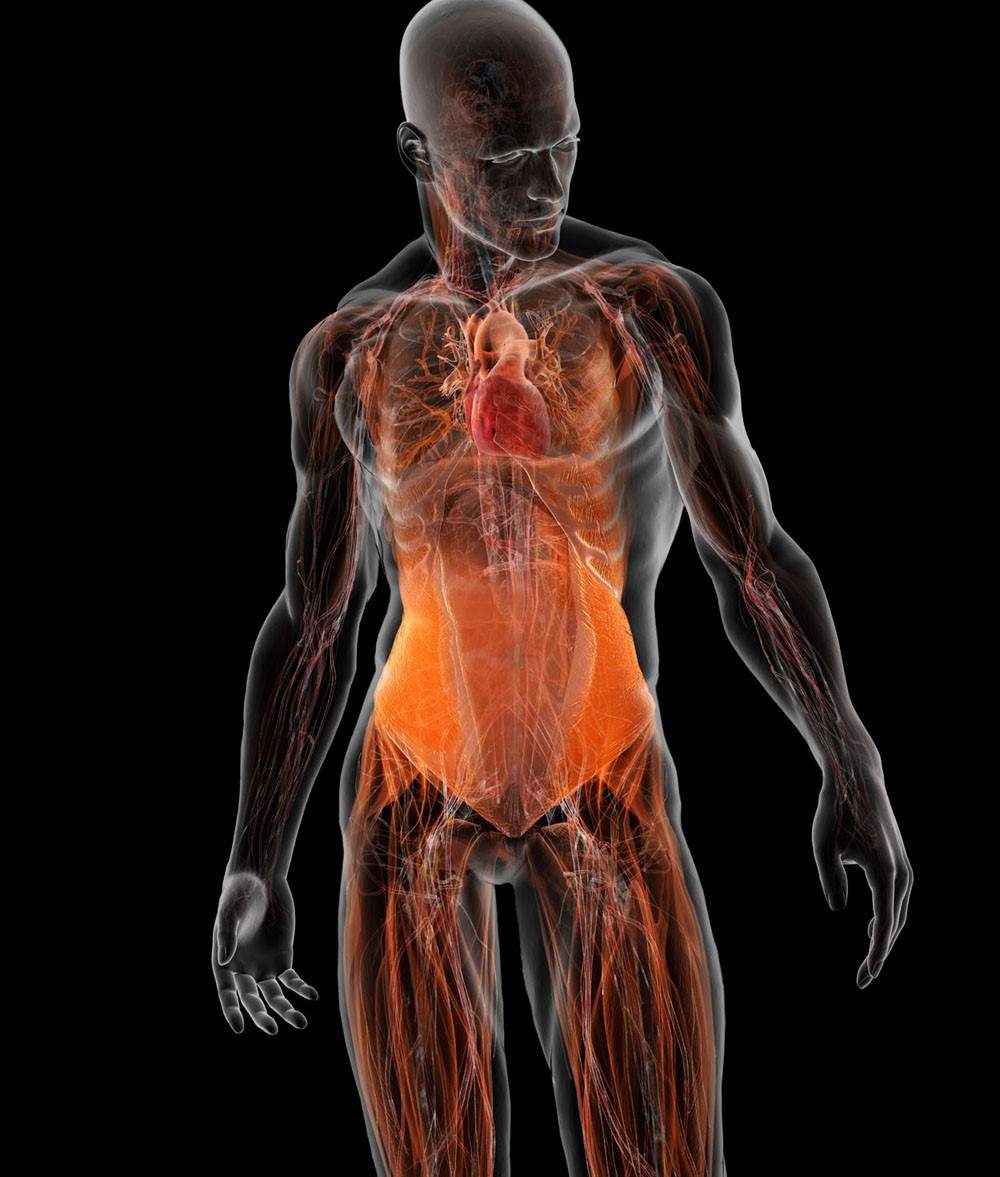 You created a beautiful image which served as the cover for Medical Illustration Sourcebook #28. Tell us about the piece. What is the typical process for creating artwork like this?

The piece was originally a cover image for Scientific American for an article about sagas nerve stimulation. Art director Michael Mrak called us up and said they needed a cover and an opening spread. We did research, got references and went from there.

The process really depends on many variables. For something like this, it’s very clear what we’re doing. In a virtual 3D space, we first pose the figure and then we give the client a few different angles of just the skin of the figure with the nerve and devices layered in with Photoshop. After they pick an angle we start messing with background colors, sometimes lighting. There’s usually about a round or two of back and forth before we have final approval.

If we’re working on something that’s more conceptual (and therefore more subjective), we have more of an open field for how to explain the image. We actually start with pencil and only go to 3D after client approval. 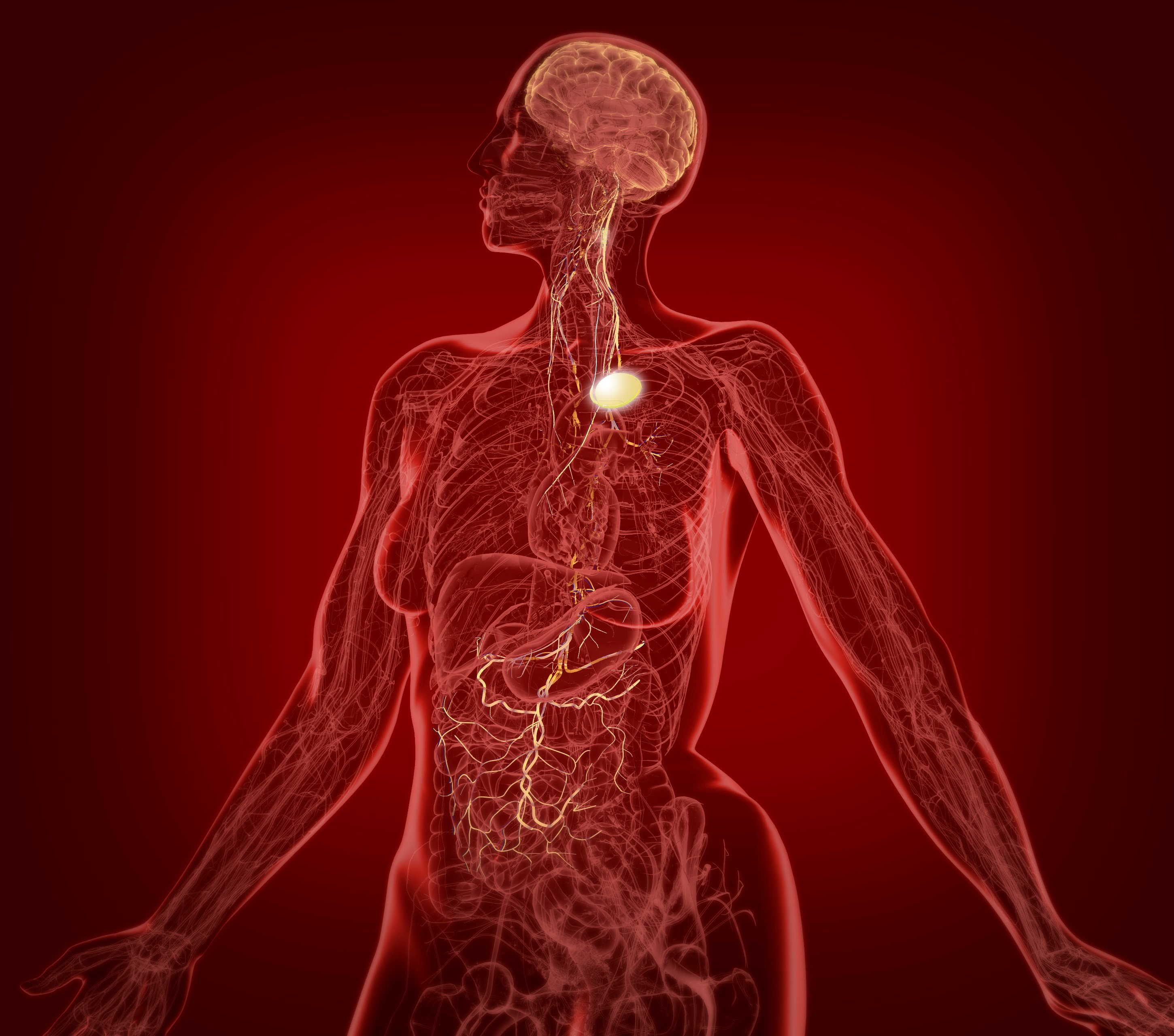 What’s been your favorite project or projects thus far?

Without a doubt, it was a 2005 project for the New York Times. They called me to do the cover for their science section, above the fold. It was a story on diabetes and I was given a huge amount of space for the illustration. I’d never been commissioned for something that large and I didn’t know what I was going to do.. It was all 3D robotics, and I was really terrified — just freaking out. So, I just went for it. I opened up all my books, did all the research, dove in and didn’t come up for air for about 3 days. In the end, this thing came out of me that I’m so proud of. The figure had some emotion in it. I loved the lines and the way it looked. To this day, as far as figurative work is concerned, we haven’t done anything quite like it, but it was a spark that  ignited my career and gave me a certain energy. Things really took off from there. 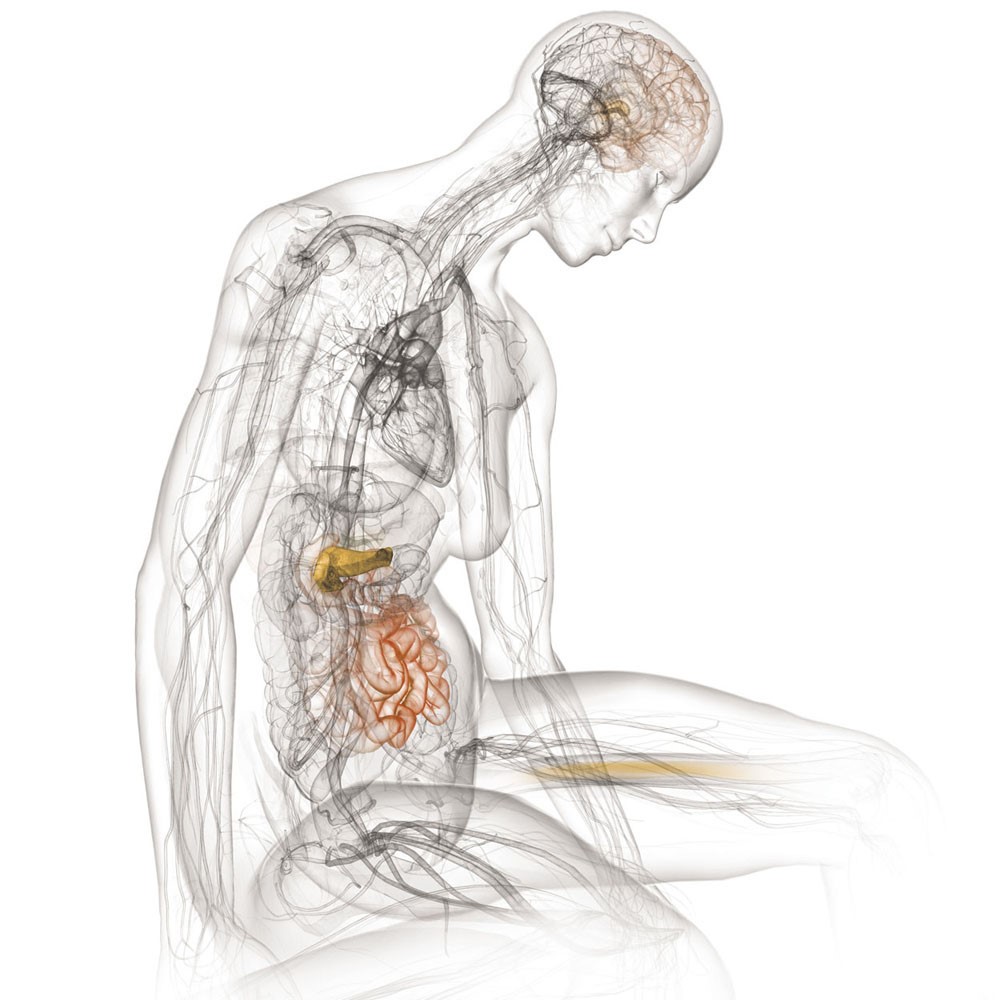 Why do you think so many prominent publications commission work from your studio time and time again? What sets you and your team apart from other medical artists?

Maybe it has to do with the fact that I consider myself an artist first, who happens to create scientific diagrams. Growing up with my mom I was surrounded by art. It’s just in me. I’m primarily informed by aesthetics and clients tell us that they appreciate that sensibility.

Bryan Christie Design also brings 70 years of experience to every project. My colleague Joe Lertola (our Information Graphics Director), has been working for 40 years..

One of the biggest lessons I learned from my father is that it’s critical that you be an easy & nice person to work with. He said that a client will call back the person who was easy to work with in addition to doing a very good job. That’s something that I really understood. So, I try not to take myself too seriously. Hopefully, our clients enjoy working with us.

Back to the client retention: the most important aspect of figurative work is that I try to imbue the people with emotion. We’re not just robots. We are way more motivated by emotion, and what really influenced that was The Pietà and how the body language of a figure could express so much. 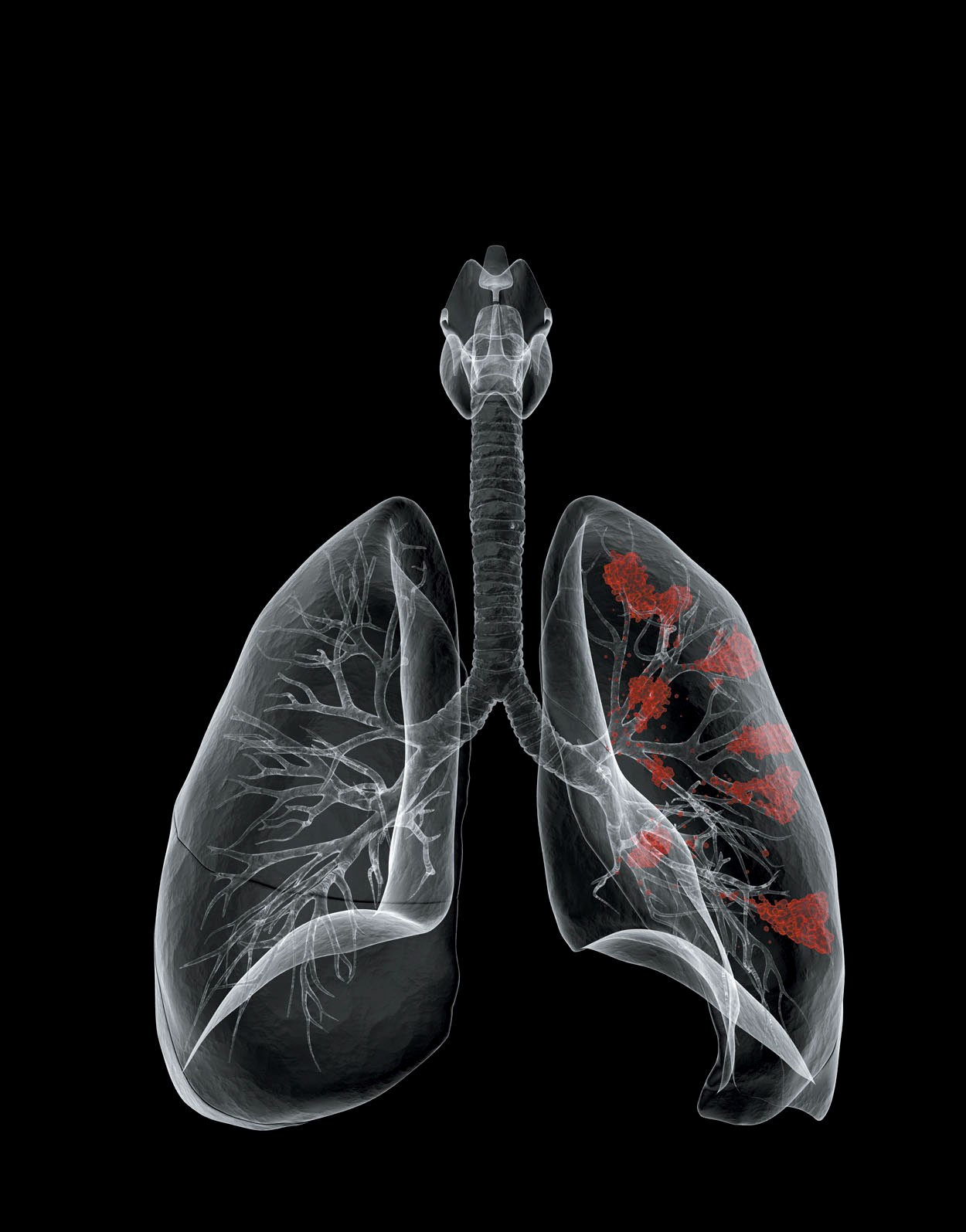 What projects are you working on now?

On the medicine side of things, we’re doing MOAs for antidepressants that can also be used for diabetes. We’re also doing a lot more animation and we really love that. It’s very fun. We’re working on some architectural stuff, something for Wired about a new museum in San Francisco, something for Goldman Sachs, etc. What I really enjoy about running the studio is that we do so many different things. Most are involved with science and technology. We rarely do purely conceptual work. 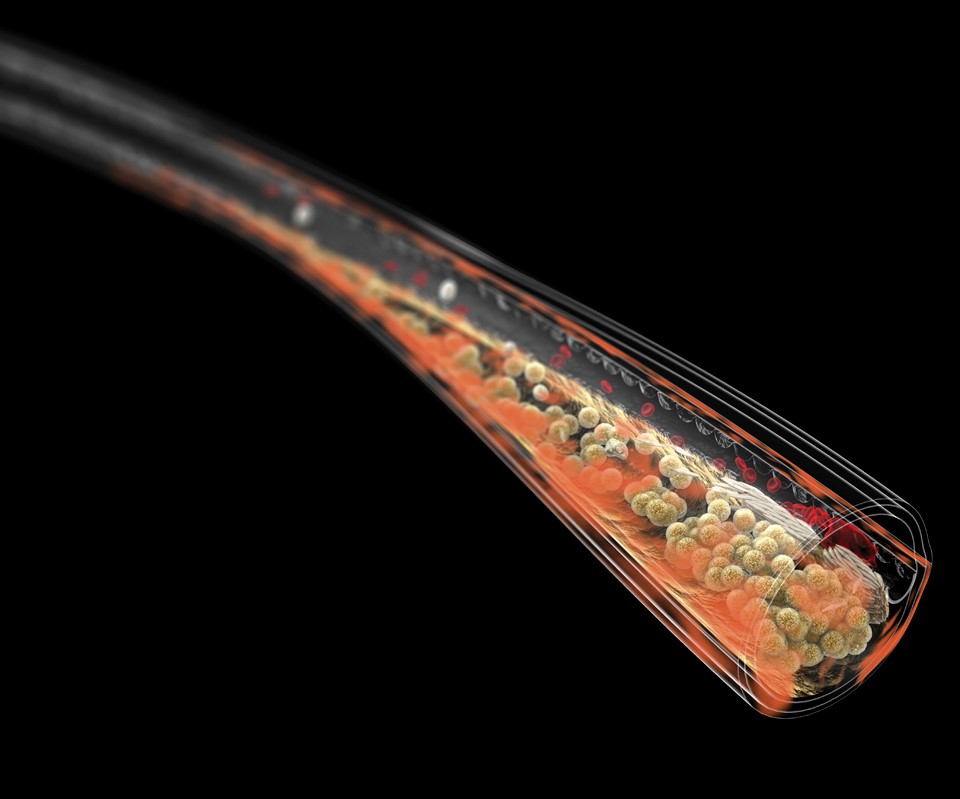 About the Author: Chinaza