Comparing Goldenrod species was one of my tasks in a recent commission  for a Horticultural company in Sweden.  All the illustrations were sketchbook studies.  Every plant was an invasive.

The focus of the illustration is the Canadian goldenrod.

Most Goldenrods are native to the Americas.  However, there’s one species native to Europe (Woundwort Solidago virgaurea).

Both Canadian and Early Goldenrod Solidago gigantea grow wild in Scandanavia.  Garden escapes were noted as early as 1910.  Although it’s an invasive, and can be a nuisance, Goldenrod does bring benefits.  It’s extremely good for pollinators, and attracts lots of butterflies.  As it flowers late in the year, it provides a welcome food supply for insects about to overwinter.  (To make your garden wildlife friendly, check out the Save the Bees guest blog.)

Goldenrod is a member of the daisy or Compositae family.  As with other members of this large and successful group, its flowers are made of disc and ray florets.  For more on this, please check out my blog.

The Canadian goldenrod plant is tall, 30 – 150 cm.  Densely leafy, it’s covered in downy hairs which are more obvious toward the top of the plant.  Giant or Early goldenrod is glabrous.  It’s a larger plant, up to 250 cm high.  Often, its stems are blueish towards the base.

The plant reproduces by means of far-reaching rhizomes, and with seeds.  These have fluffy pappas which catch the wind and spread the seed widely.

Canadian goldenrod leaves are alternate and toothed.  About 2/3 of the way down the leaf edge the teeth give over to leave a smooth margin toward the base.  As with the rest of the plant, they’re hairy.

Early goldenrod has teeth which carry round the entire margin of the leaf.  Any hairs follow the lines of the veins. 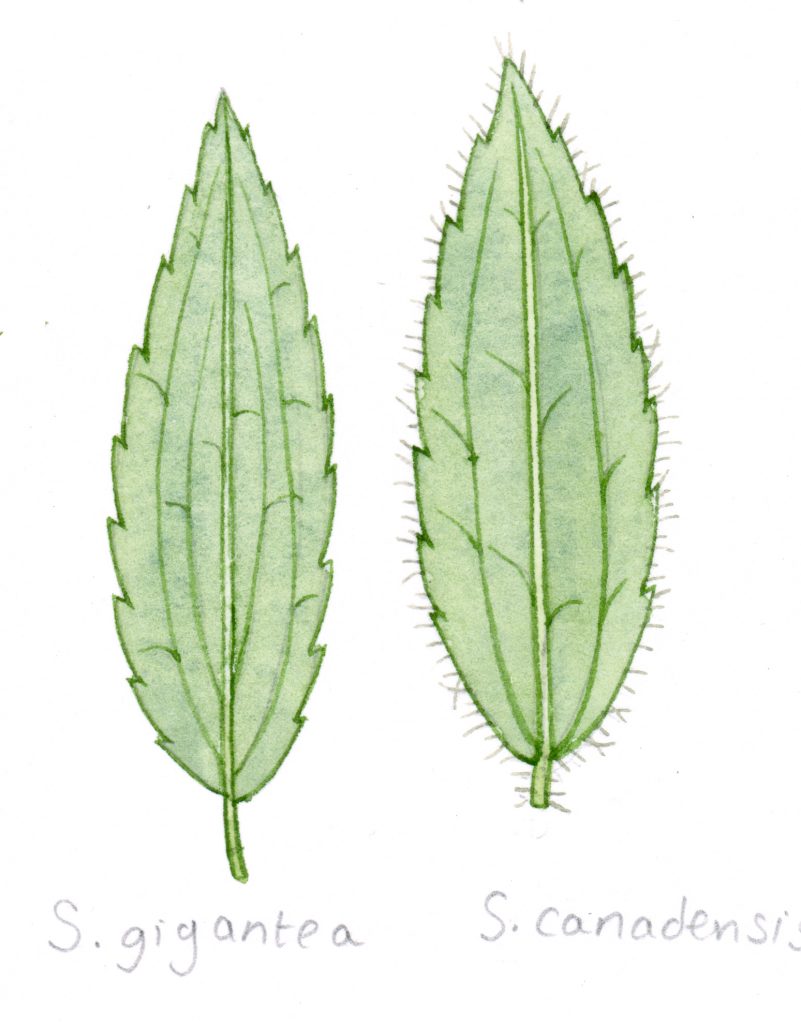 The stem of Canadian goldenrod is covered in downy hairs.  It is often flushed red.  Stems of the Early goldenrod are hairless, and may be flushed red or a more intense purple. 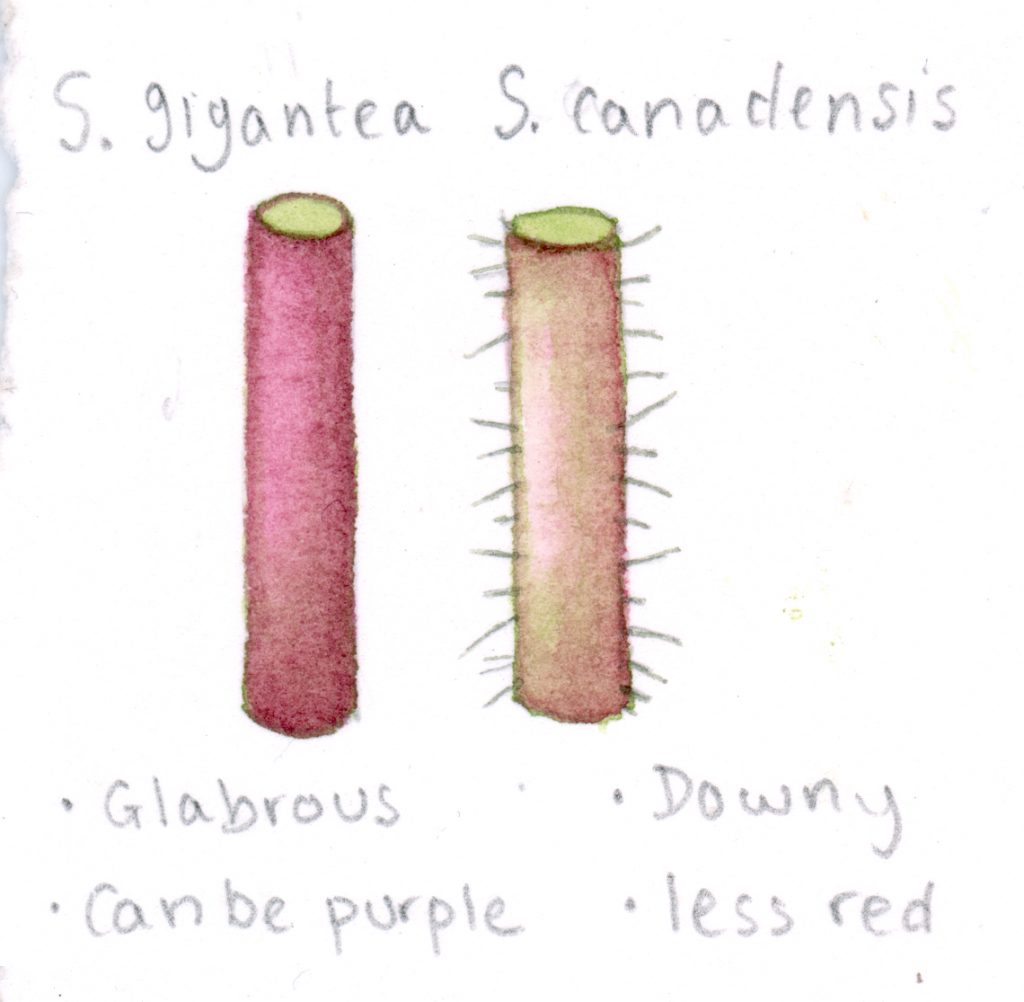 The flowering spike is similar in both species.  It carries lots of golden flowers, and tends to curve a little. 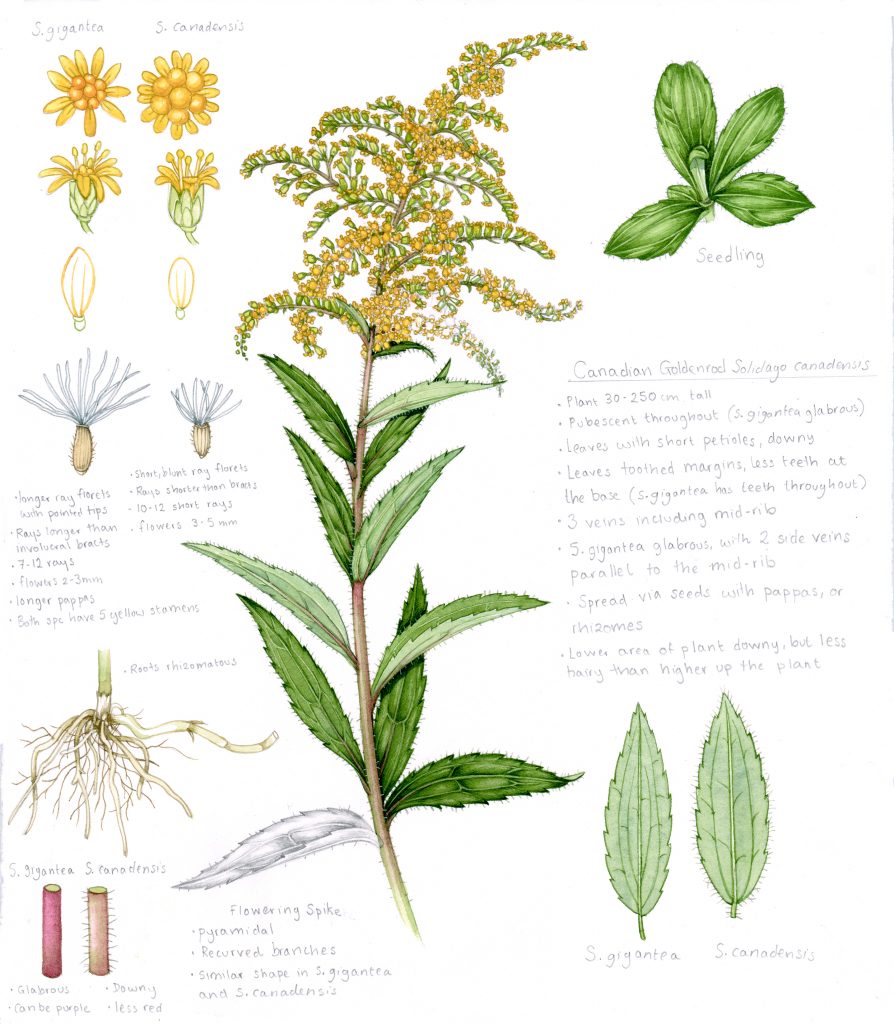 Each individual flower is composed of ray florets around the outside edge, and disc florets within.  Both have 5 yellow stamen.  There are some noticeable differences between these golden blooms.

The Canadian goldenrod is 5 – 6 mm across and has 10 – 17 short ray florets per flower.  Tips of each are blunt, and rounded.  In shape, the capitulum is domed.  Flowers are carried in wide, pyramid-like panicles.

With the Early goldenrod, there are fewer ray florets per flower, 7 – 12 of them.  Each flower is a smaller 2 – 3 mm.  Ligules of the ray florets are significantly longer, with more pointed tips.  Another differnce is the capitulum, which are are more pyramidal than in Canadian goldenrod.  The flowering branches tend to be straighter and held more erect.  Branches may be slightly hairy towards their top. 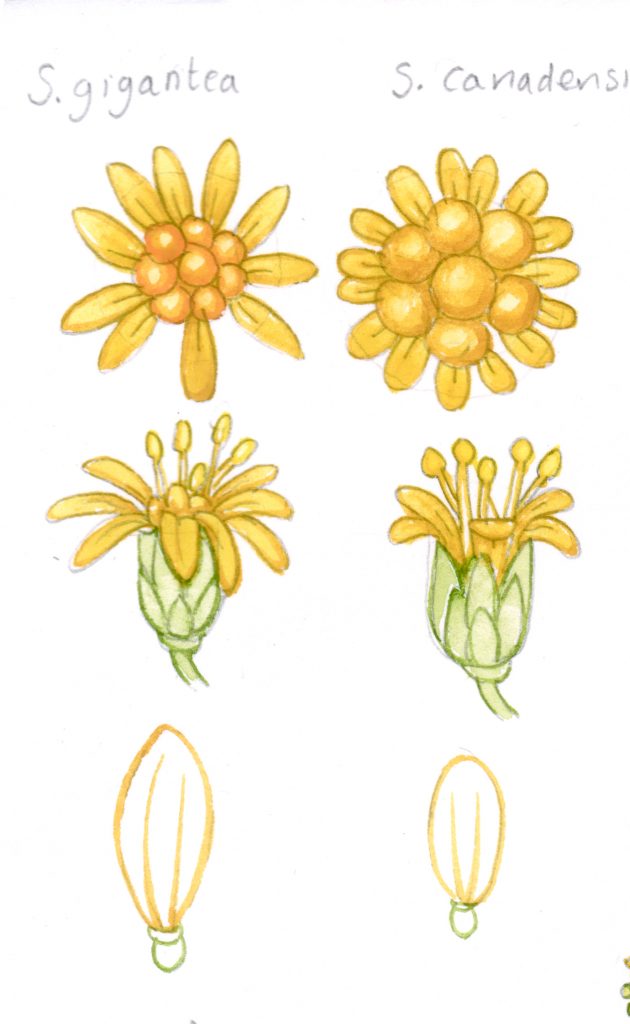 These are similar in both species, but the Early goldenrod has longer pappas.  Canadian goldenrod seeds have a slightly downy tip.

Currently in Sweden and Finland the cold weather comes before the Early goldenrod sets seed.  As global warming leads to longer summers this plant could become an increasingly problematic invasive in Scandinavia. 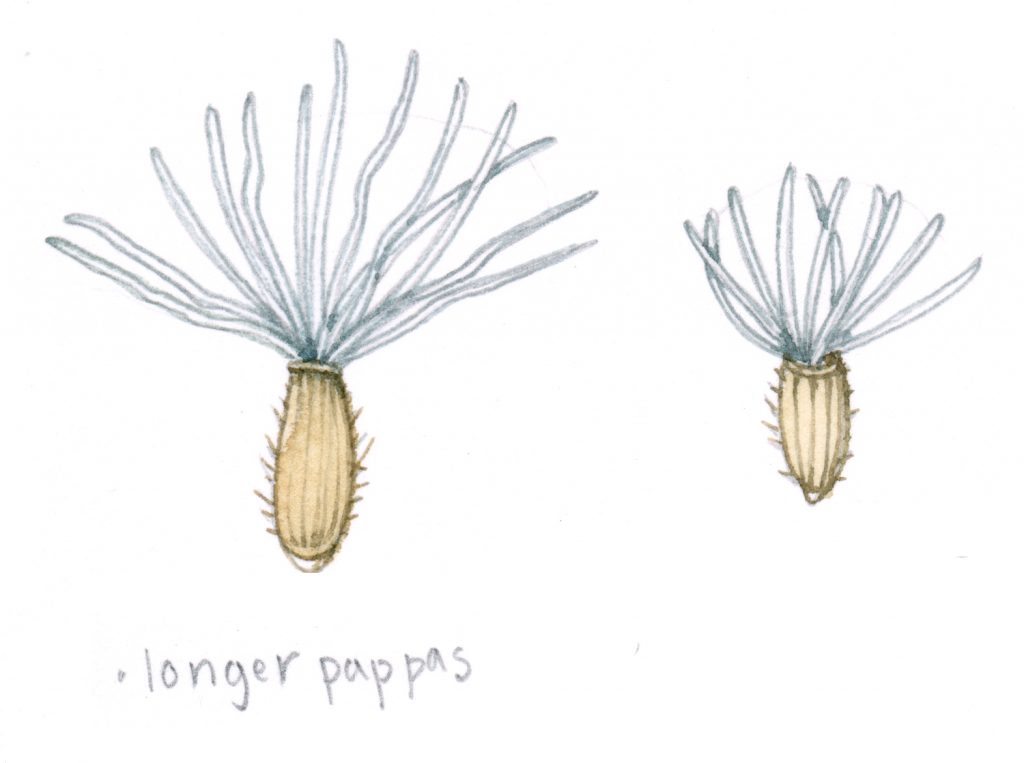 Early goldenrod cypsela vs that of the Canadian goldenrod

Naturespot has helpful and concise information on the Canadian goldenrod and on the Early goldenrod.  Yet again, Naturegate has great pages for both Canadian and Giant goldenrod.

This original sketchbook illustration is available for sale along with many other original illustrations.  Why not have a browse at Original Illustrations for sale?