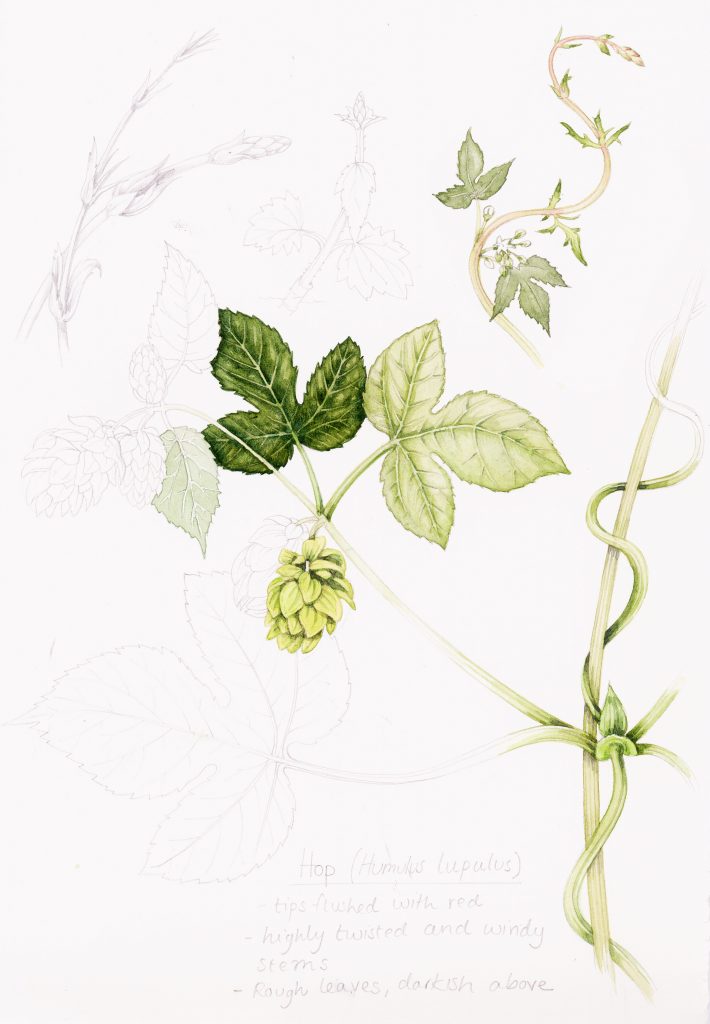 Sketchbook study of the Common hop

Hops are members of the Cannabaceae family, and are native to the Northern hemisphere.  There are three species of hop, and any number of varieties of the Common hop.  This is due to the plant’s history in brewing beer; different varieties of common hop create different flavours.

Hops are climbers, supporting their spiralling growth on whatever comes to hand (well, to tendril). 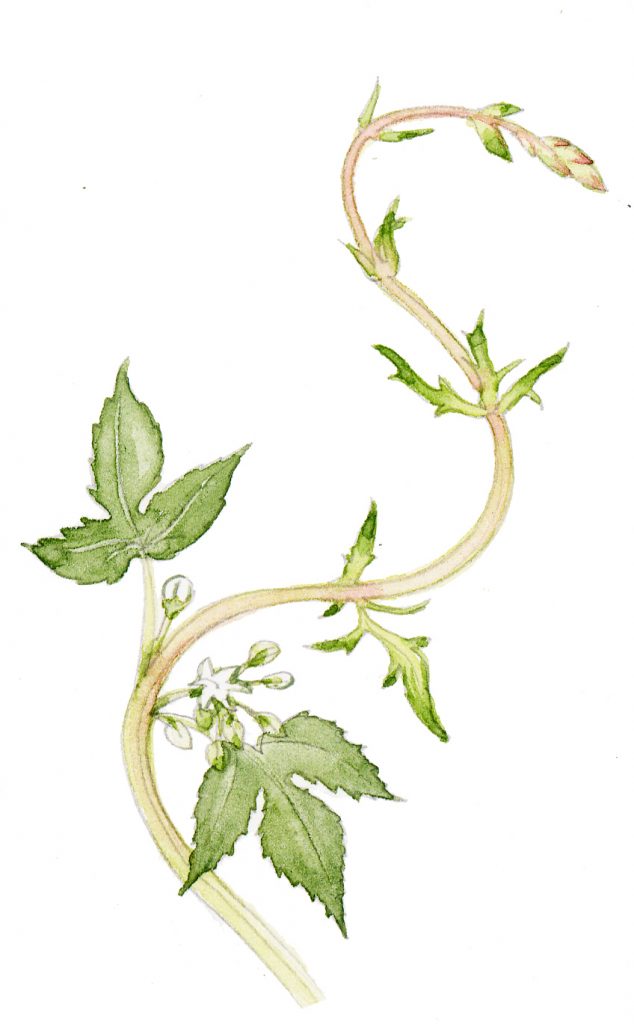 Both plants get big, with 6 m in height being the average.  Japanese hop can grow up to 10 m in one growing season.  This depends on how high the substrate or support they’re twining around is.  If it’s a telegraph pole or tree, then the plant can get close to its maximum height. 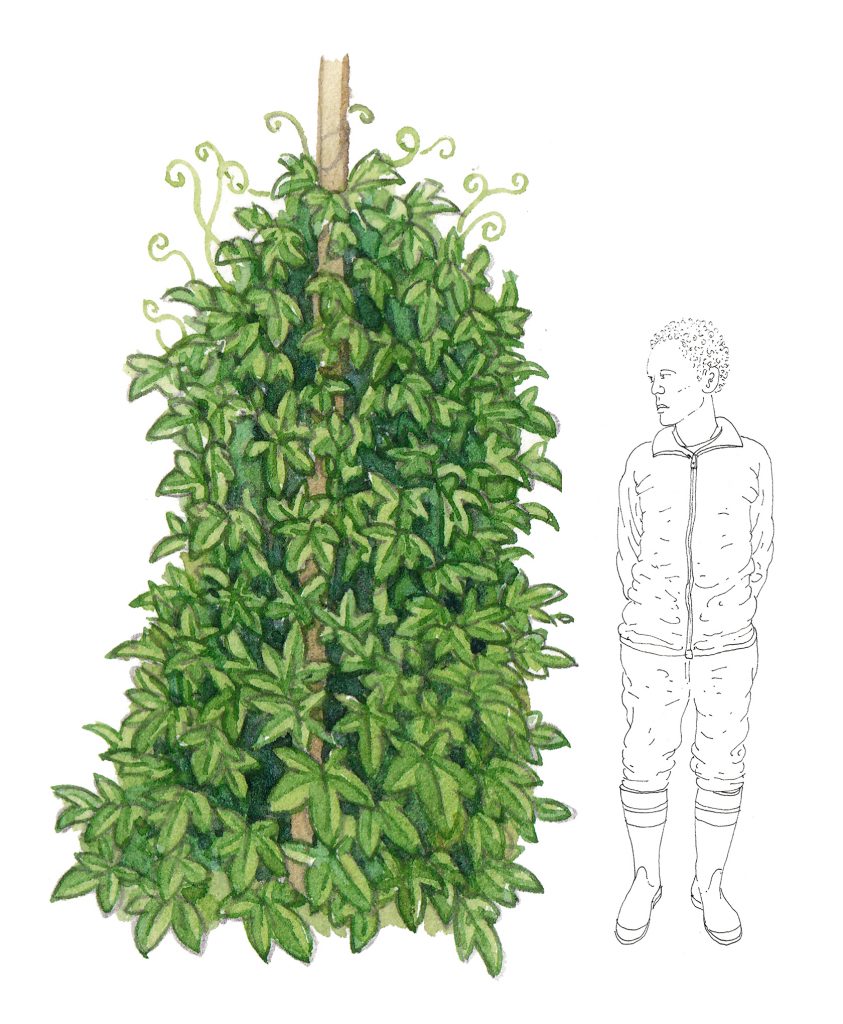 Scale illustration of Japanese hop with grown man of 180 cm

Both these species are vigorous climbers, aided by their spiny twining stems.  They are perennial climbers, sometimes referred to as bines.

Their stems are non-woody and have four sides, with backward pointing prickles that help the plants to climb in a clockwise direction.  (Interestingly, bines which grow anticlockwise, such as Virginia creeper, use suckers and tendrils rather than spines.)

However, the Japanese hop has hairs on its stem alongside the spines; in Common hop these are absent. 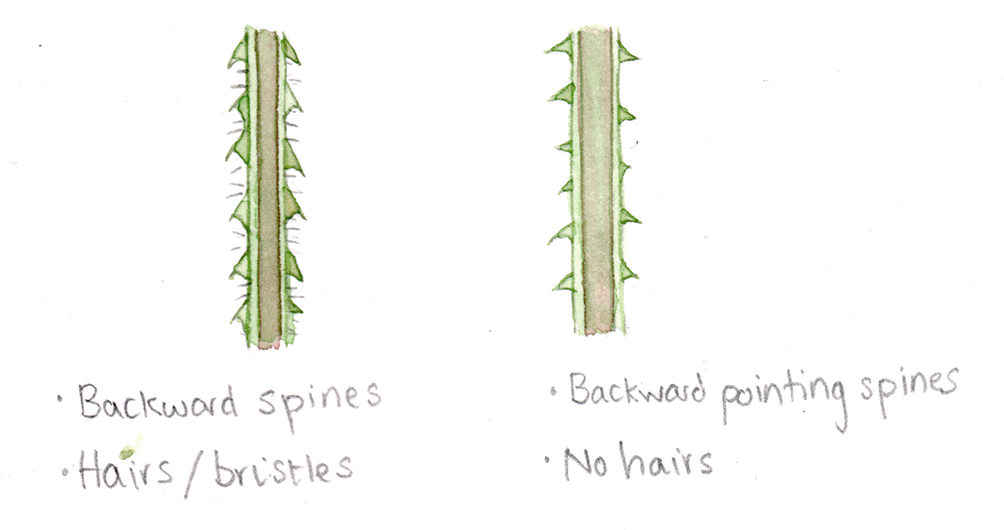 Shoots grow at a prodigious rate, the Common hop can grow 20 – 50 cm a week in summer.  These shoots are edible, and a tasty edition to salads or eaten as a green vegetable. 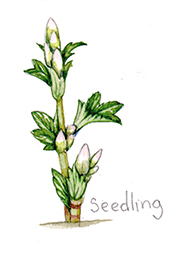 They have lobed leaves which grow in opposite pairs, and as male and female flowers are borne on different plants, they’re dioecious.

The teeth on the margins of Common hop are blunt, while those of Japanese hop are pointier.

Although the leaf stalk or petiole is long in both species, it’s generally longer in the Japanese hop.  In fact, it’s longer than the leaf blade itself.  Common hop stipules are far shorter than the leaf blade.  Some sources suggest that the stipule at the petiole base can be used to tell the two species apart.  Common hop stipules are smaller, hairless, and drop off pretty soon.  They split before being shed.  Those of the Japanese hop curve downward, are triangular and persistent, and are covered in hairs.

Being dioceious, male and female flowers are borne on different plants.  As it’s the female flowers of the Common hop that produce what we consider “hops”, they’re the plants that have been encouraged over the years.  In fact, male Common hops were prohibited in Ireland under the Noxious weeds act of 1965.

Male flowers of both species look similar and are borne in loose-branching clusters.  Those of Common hop are borne on drooping branches with clusters of 20 – 100 flowers, while those of the Japanese hop are said to be held erect.  Again, it’s a cluster of 20 – 100 flowers.  Both have five spreading sepals, and five stamens.  These are pale yellow with darker yellow glands in the case of Common hop. The sepals of the Japanese hop are hairy, those of the Common hop are not. 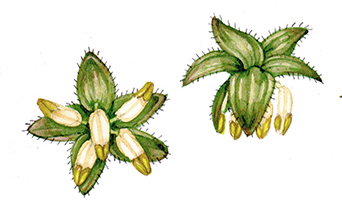 Male flower of the Japanese hop

Female plants can be propagated with vegetative reproduction.

Male hops were discouraged as if the hop plant produced seeds, the fatty acids within the seeds could alter the flavour of the hops and thus distort the brewing process.

Female flowers are pistillate, having no stamens, with 2 thread-like styles.  They’re borne in cone-like spikes which appear at the top pf branches that grow from the leaf axils.  There are a few to several flowers per cluster.  The female flowers lack petals, and each is surrounded by a green bract. 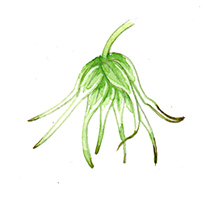 Female flower of the Common hop (without basal bracts)

Female Common hop flowers have 10 – 50 pairs of flowers per cluster, and each pair of flowers has a glabrous pale green bract at its base, with a blunt tip and yellow glands at its base.  The bracts of Japanese hop are more pointed, and covered in sparse white hairs. 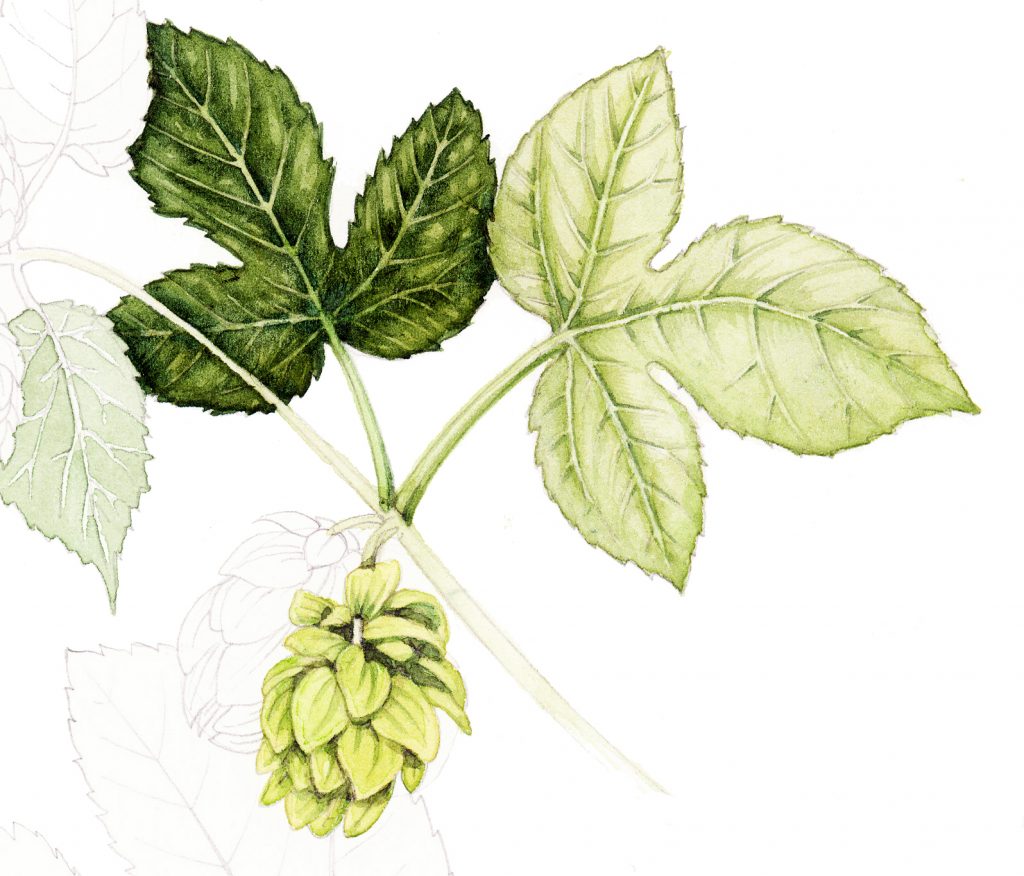 The fruit of the Common hop is the part used in brewing beer.  They’re called strobilus (plural strobili) meaning cone.  If you look at one next to a pine cone, this makes sense.

Common hop strobili are pale green, papery, and up to 3cm in length.  They are hairless and each bract is blunt. 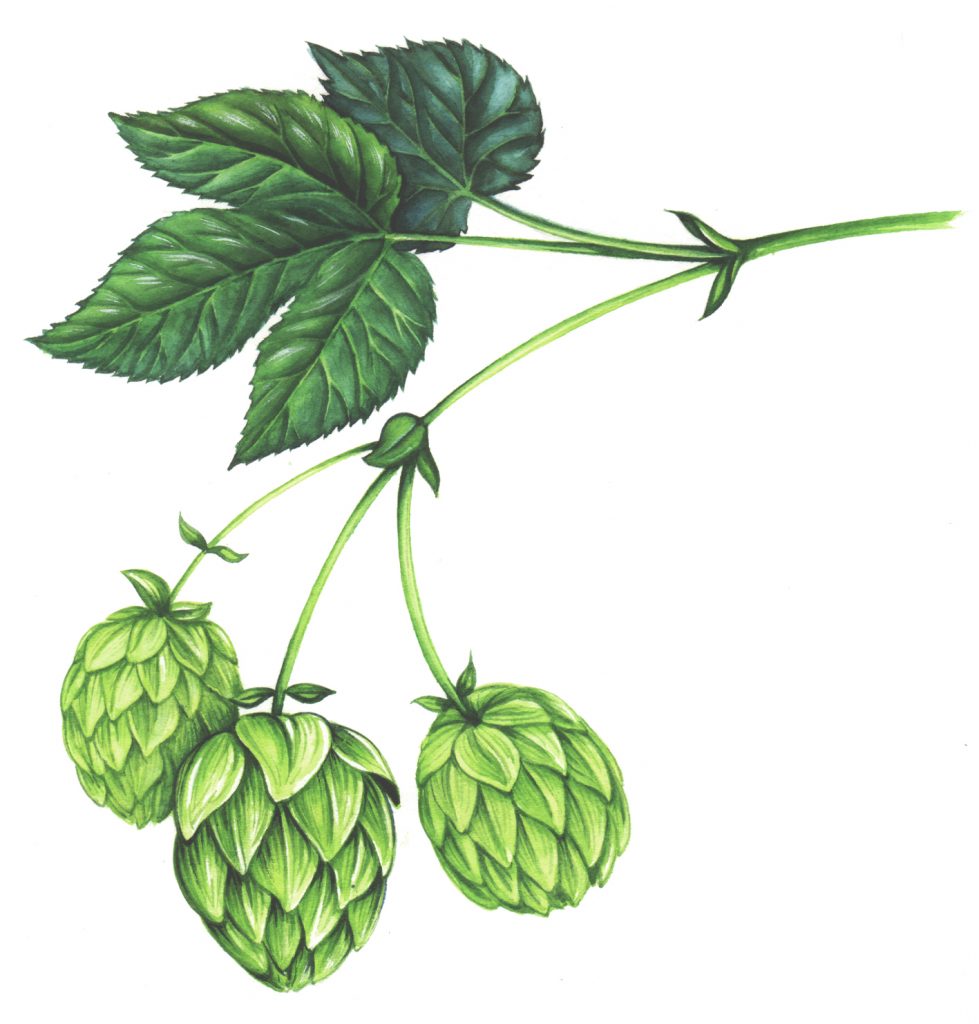 Japanese hop strobili are a darker, bright green.  They’re hairy, with most hairs at the base of each bract.  The bract tips are acuminate.

When seen together, the difference between the two species is clear. 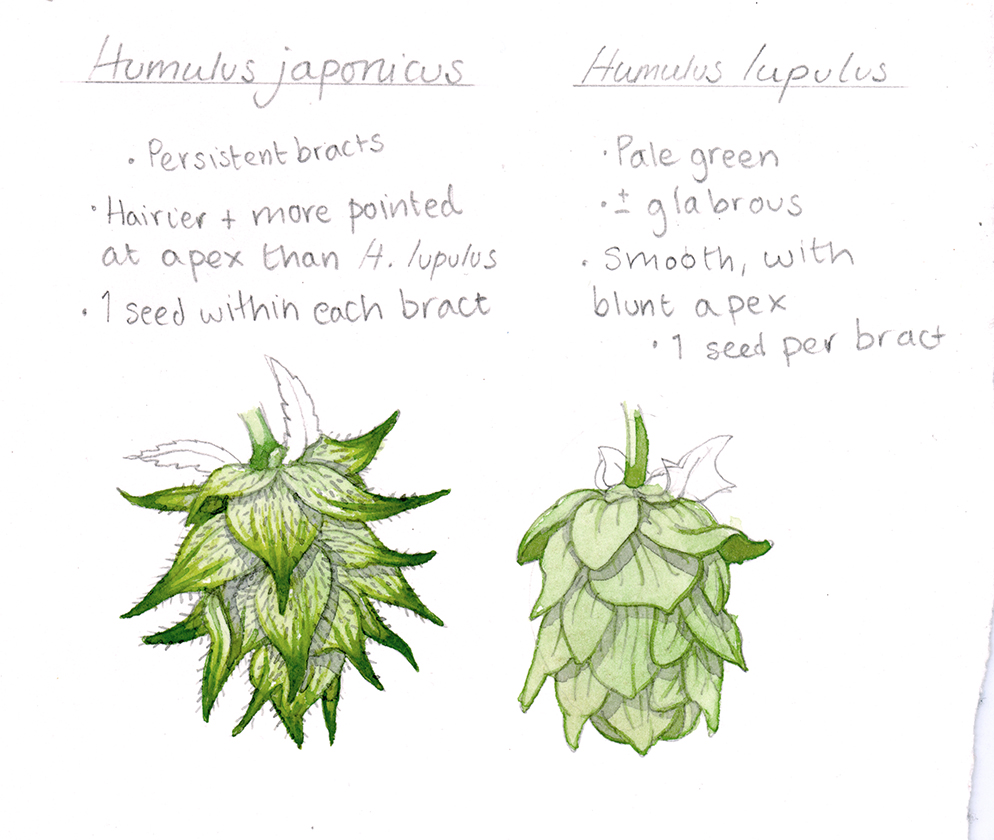 I mentioned the number of seeds per bract; as stated earlier, hops used in the brewing industry are barren. 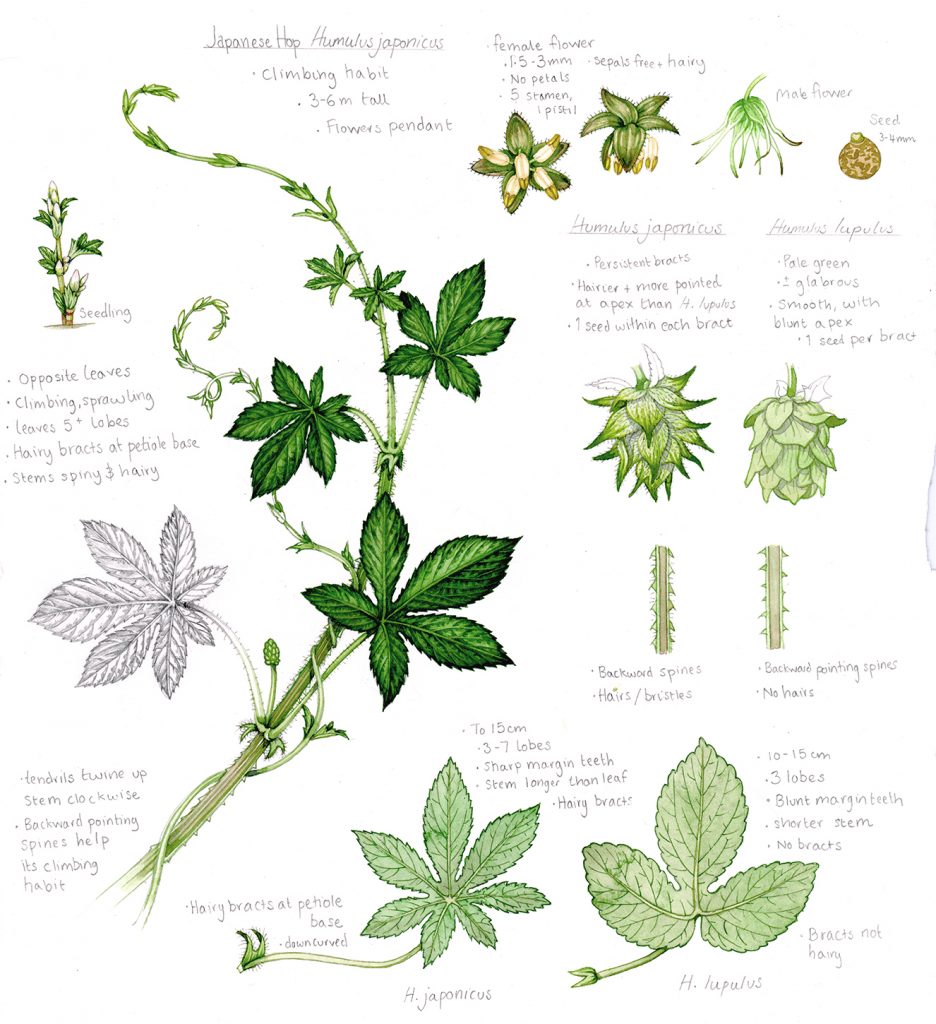 My main problem researching the hops is not the difference between these two species.  That’s easy enough; the leaves and stems are very different, as are the strobili.  No.  My main challenge was getting my head round the structure of the monoecious hop inflorescence, and understanding what structures were present (or were not) in each.

There were many rabbit-holes that I fell down whilst researching this blog.  Did you know that until 1915, in Finland, peasants had to provide Common hop as part of their annual tax bill?  Or that Common hop plants which germinated 8,000 years ago still have ancestors twining around alder trees?  (Both of these facts are from the excellent Natures Gate site).

The varieties of Common hop, some lost and some saved from the brink of extinction, are numerous and fascinating.

The uses of hop are numerous, not only for weaving tough fabric and brewing beer; but for making dye, medicine, and for their anti-bacterial properties.  Hops have been used to treat anxiety and sleep disorder, and to froth up beer, as well as to flavour it.

I love how one plant can open a hundred doorways. 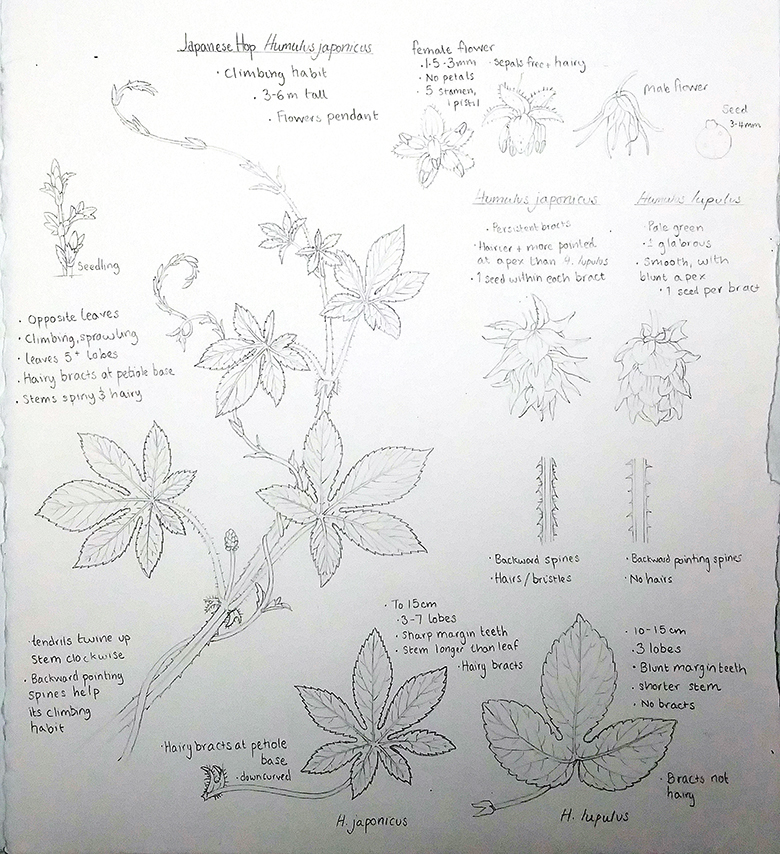 Pencil rough of the Japanese hop

Lots of great online resources helped me here.  The Midwest Invasive Species Network, Minnisota Wildflowers has excellent pages on Common and Japanese hop, The Center for Invasive Species and Ecosystem Health has lots of images for Japanese and Common hop; and there’s a rather lovely blog about the hops growing at the Met museum’s Cloister gardens.