What I love about these jobs is the enormous amount you learn about species you may never have noticed before.  In this blog, I’m going to showcase a few of these lovely plants, and what seaside habitats you’re likely to find them in.  To see the entire list, you’ll have to wait til the chart is published and buy a copy!

For more on Coastal Flowers, you might want to take a look at my recent blog on Halophytes (salt loving plants) and their amazing adaptations to a tough habitat.

The flower species I illustrated are categorised according to their habitat by FSC.  Although all the habitats are near the coast, the species growing in each are quite site specific.  We have coastal flowers of cliffs, sand, mud, and shingle.

I’m familiar with most of the species that appeared in this habitat because of time spent walking the coastal path in Pembrokeshire. This means that there are lots of details in my botanical sketchbooks, and this helps me to draw these plants out of season.

Sheep’s bit is related to scabious and is sometimes called Sheep’s bit scabious.  It has that distinctive pale blue colour which is so hard to capture in watercolour. 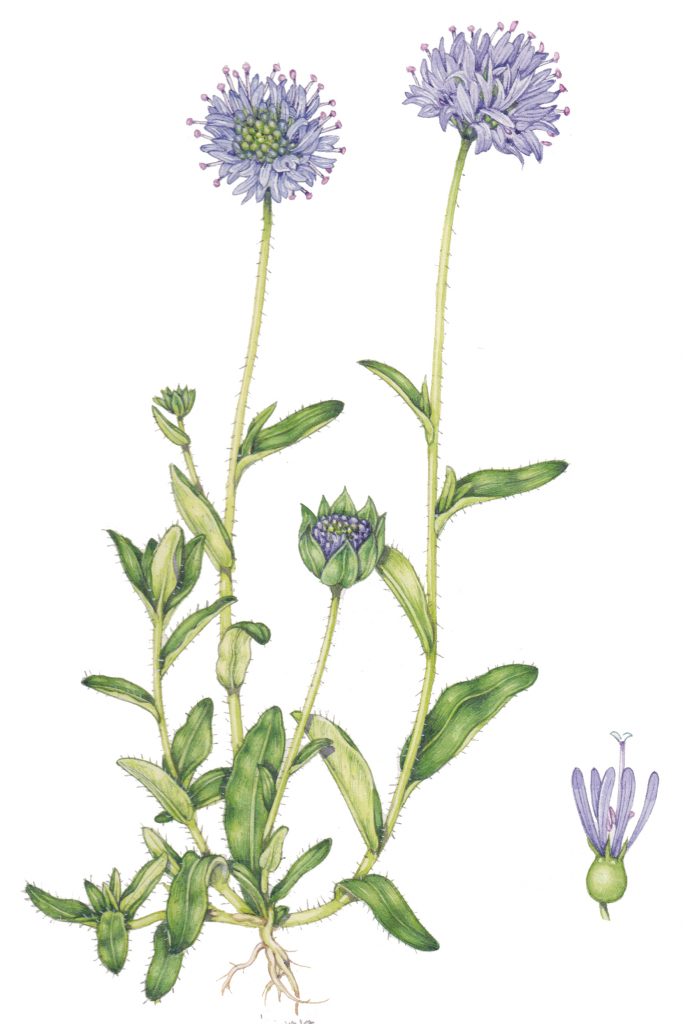 This plant can be told apart from other scabious species because of its rather domed flowering head and paler hue.  It grows on cliff-top grassland and can carpet a cliff with lilac blue.  Like lots of other wild flowers, it looks amazing if you examine it under UV light. These patterns help attract pollinators whose vision includes the ultraviolet spectrum.

Thrift is another flower that can carpet a cliff-top.  It grows from rounded cushions of straggly linear leaves, and is sometimes called Sea-pink or Cliff clover.  It grows on rocky outcrops, and can look incredible when next to golden-yellow coastal lichens.

I love the delicate way the individual flowers in the flowering head overlap one another, and jostle for position.  However, getting the structure and anatomy of these right is always tricky.

As with the Sheep’s bit, Thrift is also grown as a garden plant. 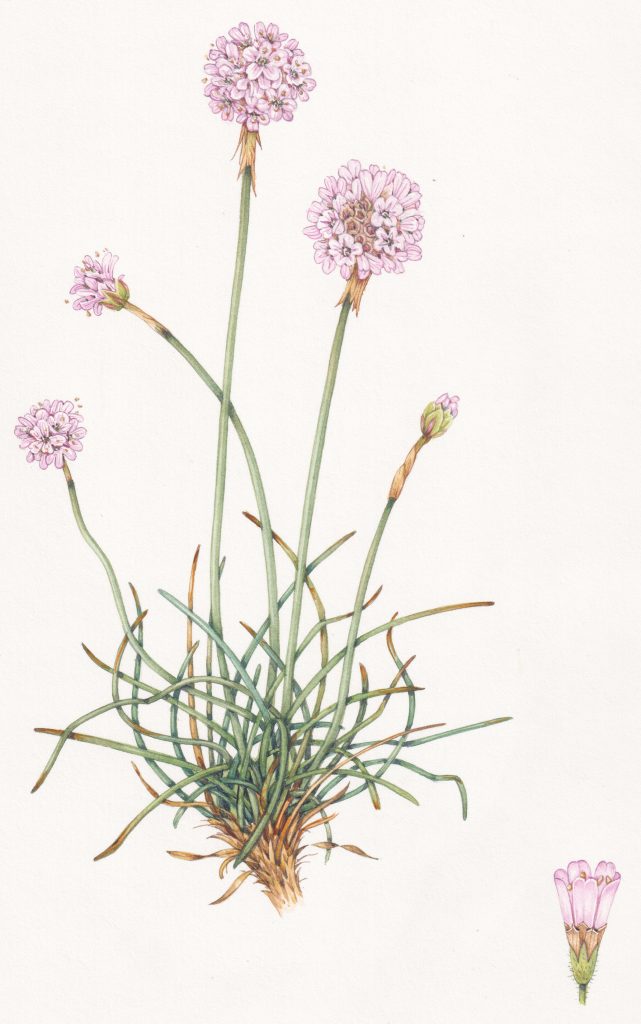 Other plants in this habitat include Buck’s horn plantain Plantago maritima and the elegant and early-flowering Spring squill Scilla verna. 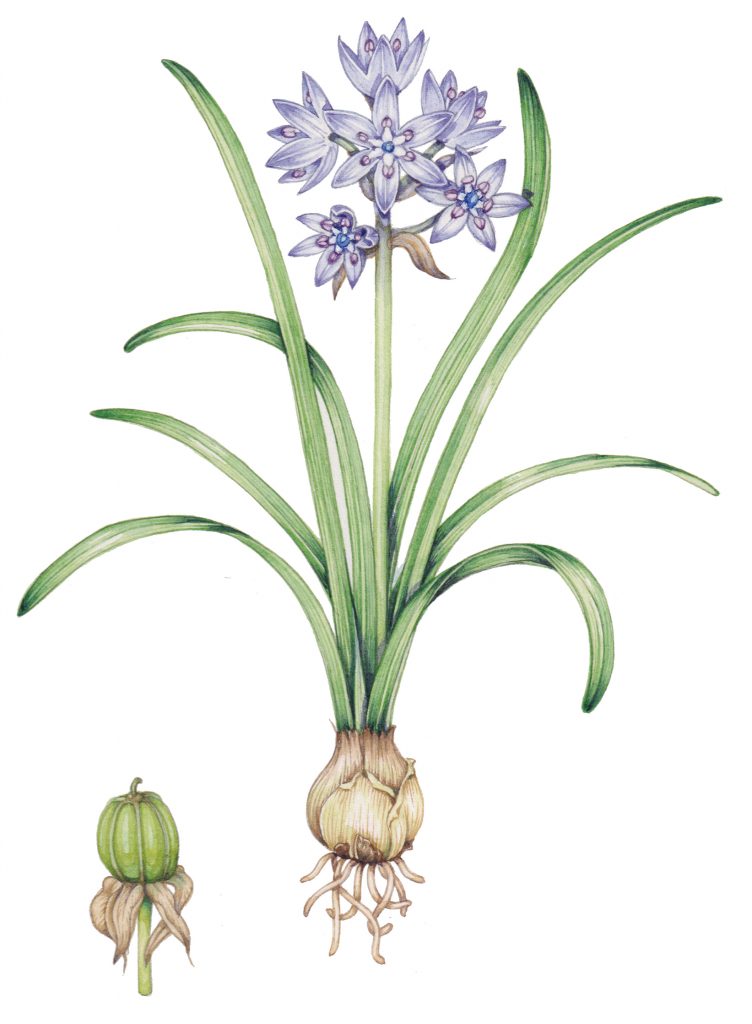 These flowers were less known to me, although I’ve always loved Sea bindweed Calystegia soldanella and illustrate it often. 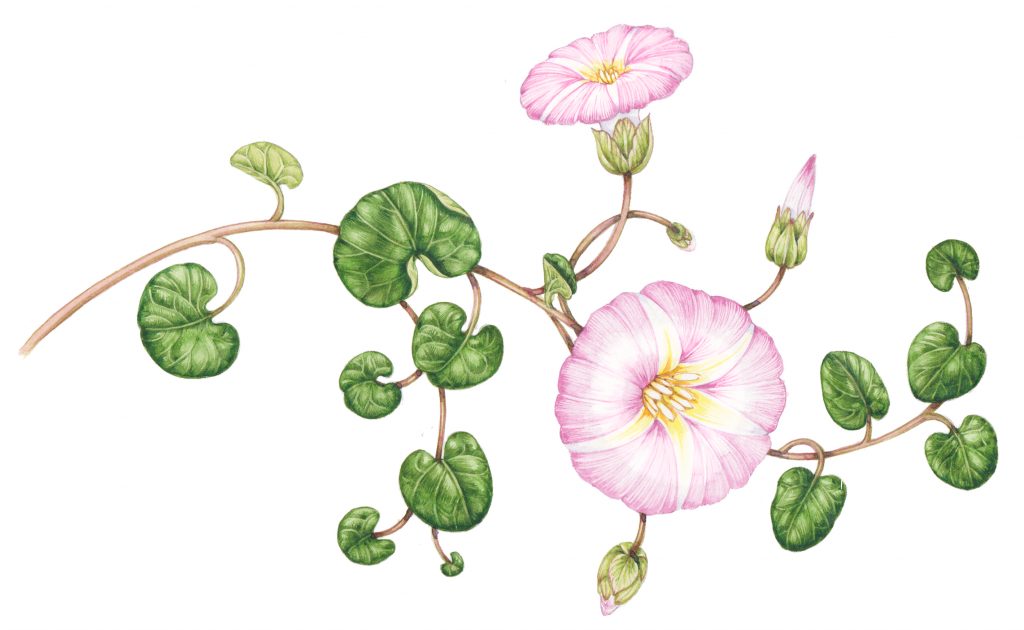 An instantly recognizable plant is the Sea Holly, Erygium martimum.  It’s got such a distinctive colouring, all pale blues and grey-ish greens.  This colour is due to its thick waxy leaf cuticle which helps it regulate water in salty environments.  The leaf shape takes some working out, and having the network of lacy white veins against the glaucous leaf blade is really hard to illustrate.

The flowering head looks like a thistle or teasel, and produces gorgeous blue flowers.  Again, not easy to illustrate!

Sea Holly roots can grow deep, and used to be sugared and sold as sweets! 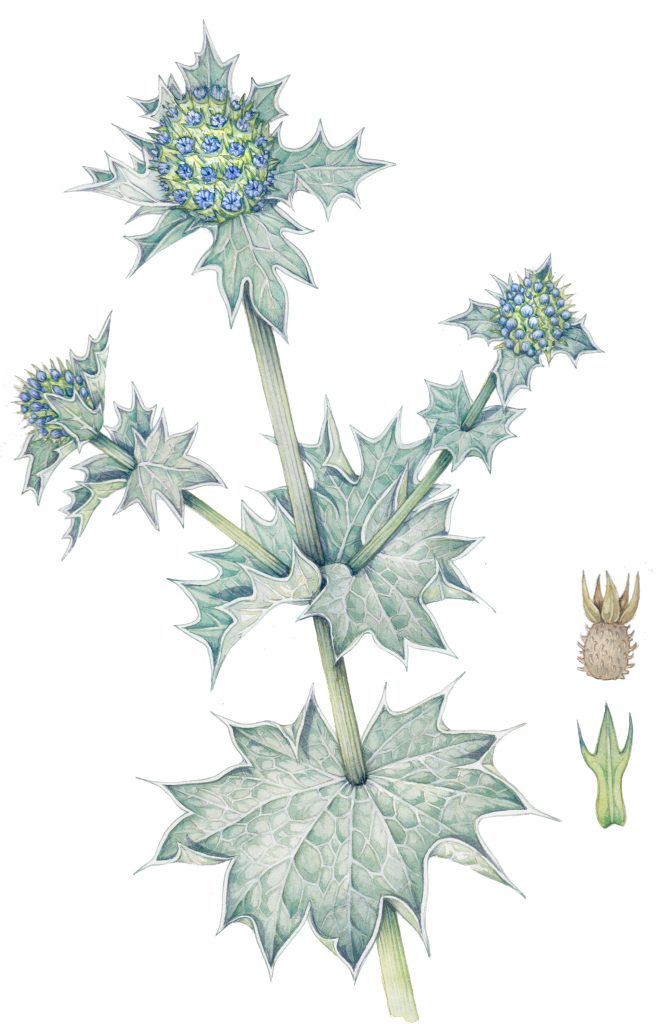 Common Restharrow Ononis repens is a gorgeous little plant.  It’s low lying and forms mats across the sand, studded with bright pink flowers.  Another similar species, Spiny Restharrow, bears impressive prickles, but this species only has the occasional spine.

It’s leaves are blueish, and a little greasy to touch.  I think the gradation of pink to white on the flowers is stunning, and was really fun to illustrate.

And why is it called Restharrow?  The plant has an incredibly tough and thick mat of roots that anchor it, and these would stop a plough (or a harrow) in its tracks.

Another of the Sandy habitat flowers I loved illustrating was Sea rocket, Cakile maritimum.  There’s something very elegant about the four-petalled flowers of cruciferous plants, and this species is no exception. 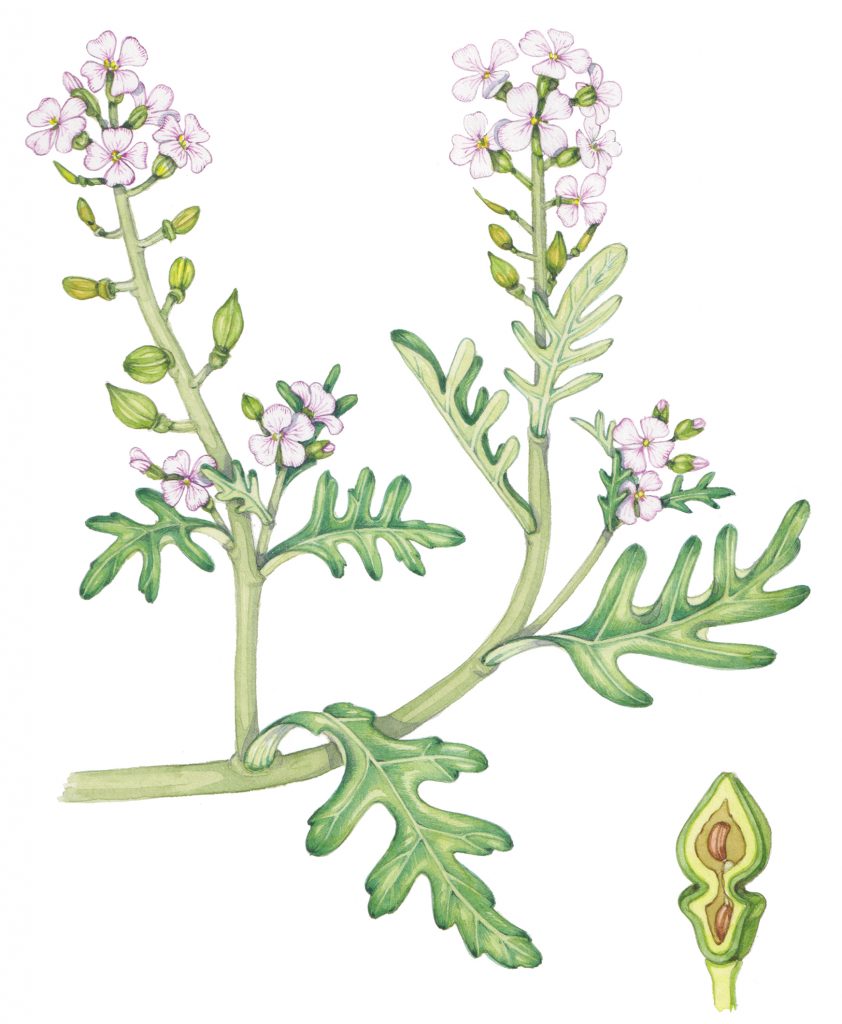 Flowers growing in the mud and estuarine habitats are all pretty new to me.  Partly cause I’ve not spent much time in salt-marshes, and partly because when I do, the flowers are often inaccessible out on the mud flats.  It was lovely to get the chance to learn more about them.

Sea aster is a daisy-like flower with pale blue flowering heads.  It grows in clumps along muddy banks of estuary and salt-marsh habitats, where the mud is a little drier.  Like some of the other coastal flowers in this blog, it is prolific and can make a muddy bay pale blue with its flowers. 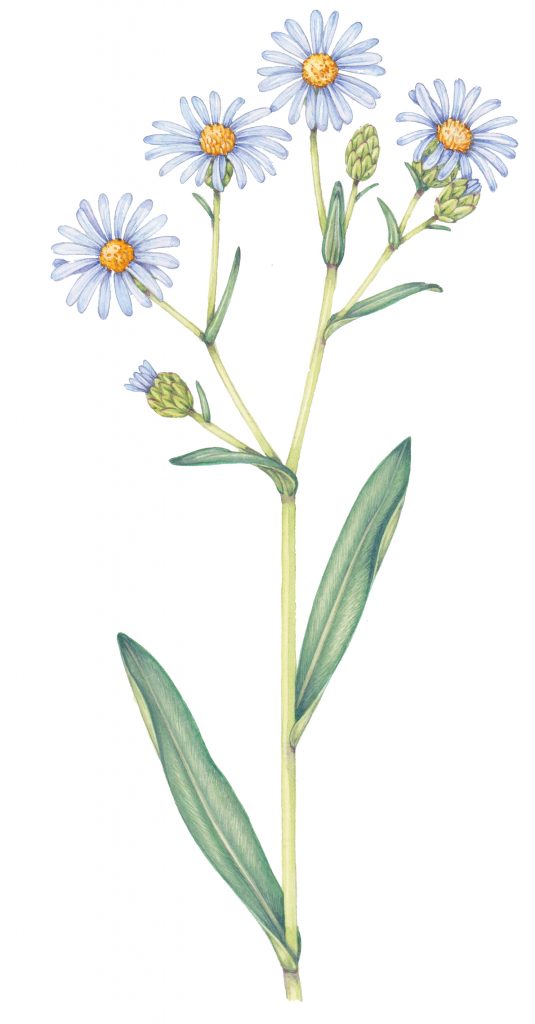 Danish scurvy-grass Cochlearia danica was new to me.  It’s a pretty little plant with mauve flowers and a basal rosette of sprawling leaves.  Related to the cabbage, it’s entirely edible, and very high in vitamin C.  This explains the name; sailors would eat it to ward off scurvy. 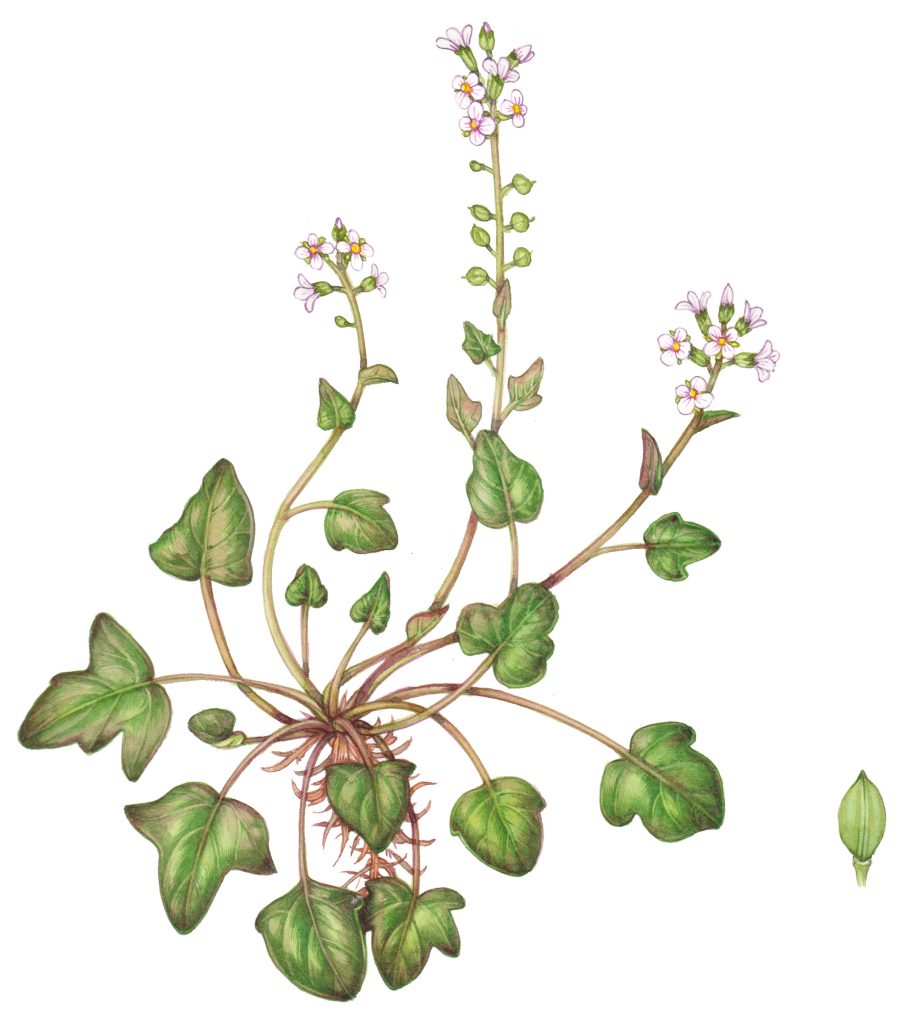 This plant (and it’s relative the Common Scurvy-grass, Cochlearia officianalis) are thriving.  Roadside verges get sprayed with salt in the winter, and this creates the perfect salt-rich habitat for these opportunistic little plants.  In fact, scurvy-grass has colonised more new habitats in the last 50 years than any other British wild plant (Plantlife). 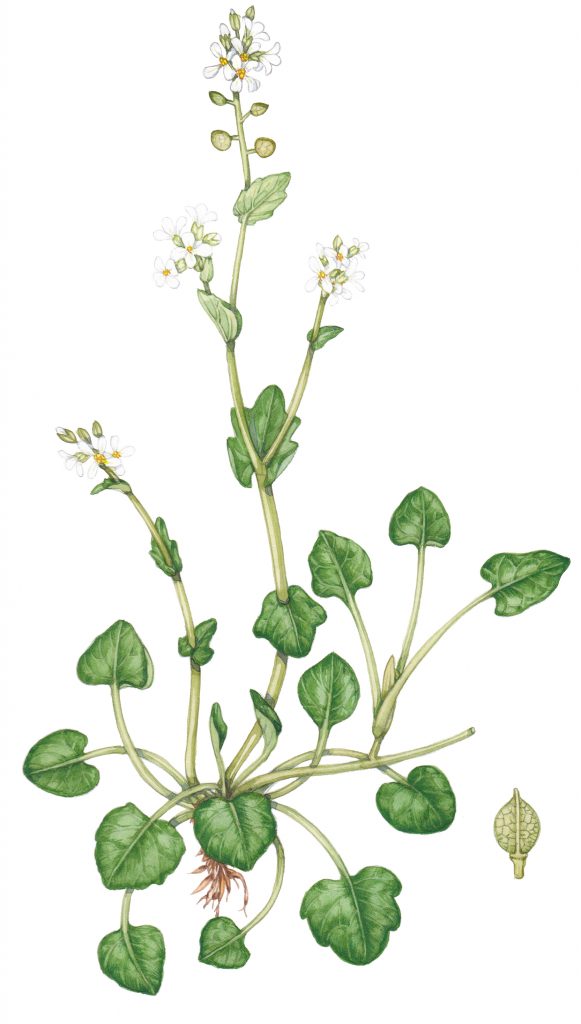 I recognized lots of the flowers on the shingle habitat list as I spent some years in Selsey, near Pagham Nature reserve.  The beaches are all shingle, and very beautiful too.

The hardest one to illustrate was the Sea carrot, Daucus carota gummifer. Umbeliifers are really hard to draw as there is so much detail in both the leaves and the flowering heads, and the overall shape needs to be spot-on for identification.  In fact, I’m going on a day course this year to learn more about Umbellifers and the Apiaceae.  I’m hoping it’ll help me when I next have to paint one of these beautiful plants. 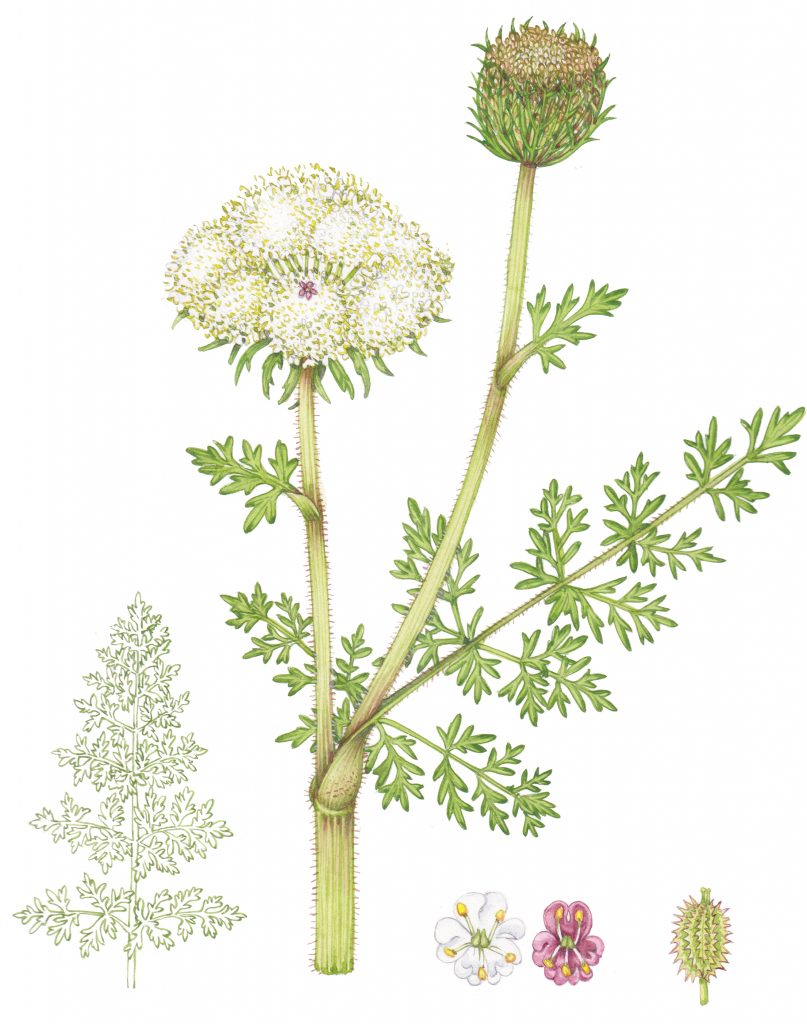 The flowering heads will often have just one or perhaps two isolated dark purple flowers in amongst the creamy ones.  It’s very strange, and very pretty.  In bud, these umbels look reddish, but the petals and flowers are creamish white once open.

Although the plant has leaves that smell of carrots, their roots are very different.

Sea mayweed Tripleurospermum maritimum was entirely new to me.  I’ve illustrated other mayweeds, and was keen to know how this species differed.  The main difference seems to relate to where it grows.  Mostly along the top of the drift-line, this mayweed tolerates salt levels that would kill other similar species. 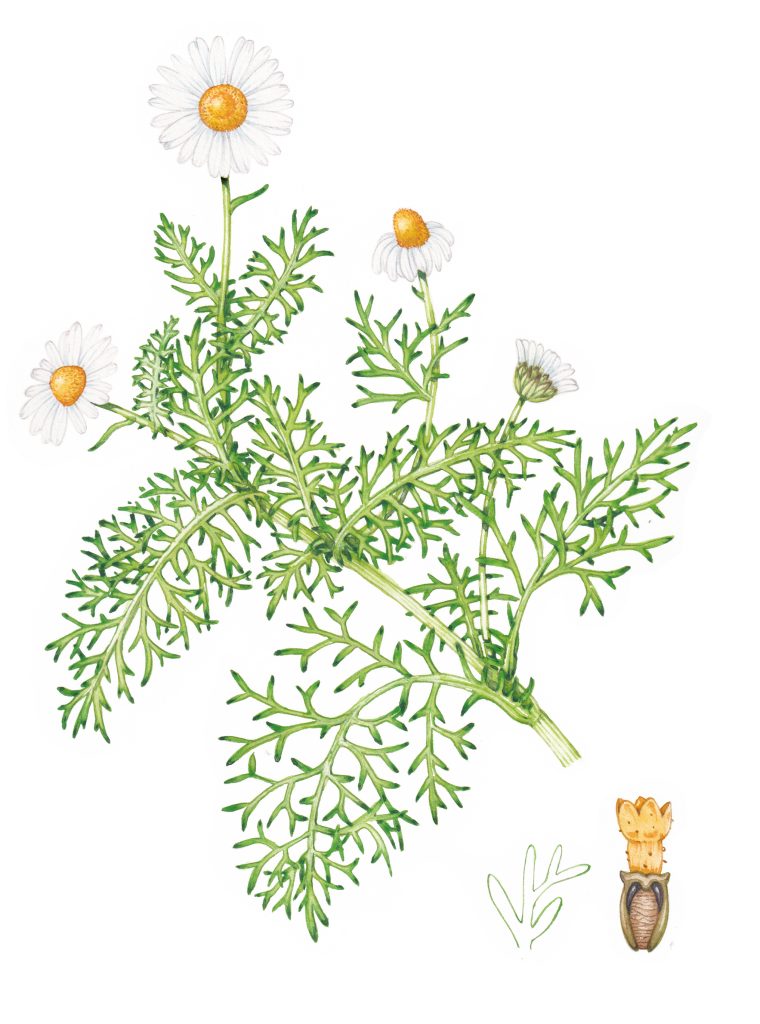 There’s lots of variation in leaf thickness and stem shape, but the plant is generally stouter than its most similar cousin, Scentless mayweed.  It has branched wiry leaves, and its stem can be flushed purple.

Other flowers in this habitat include the Sea pea Lathyrus japonicus. 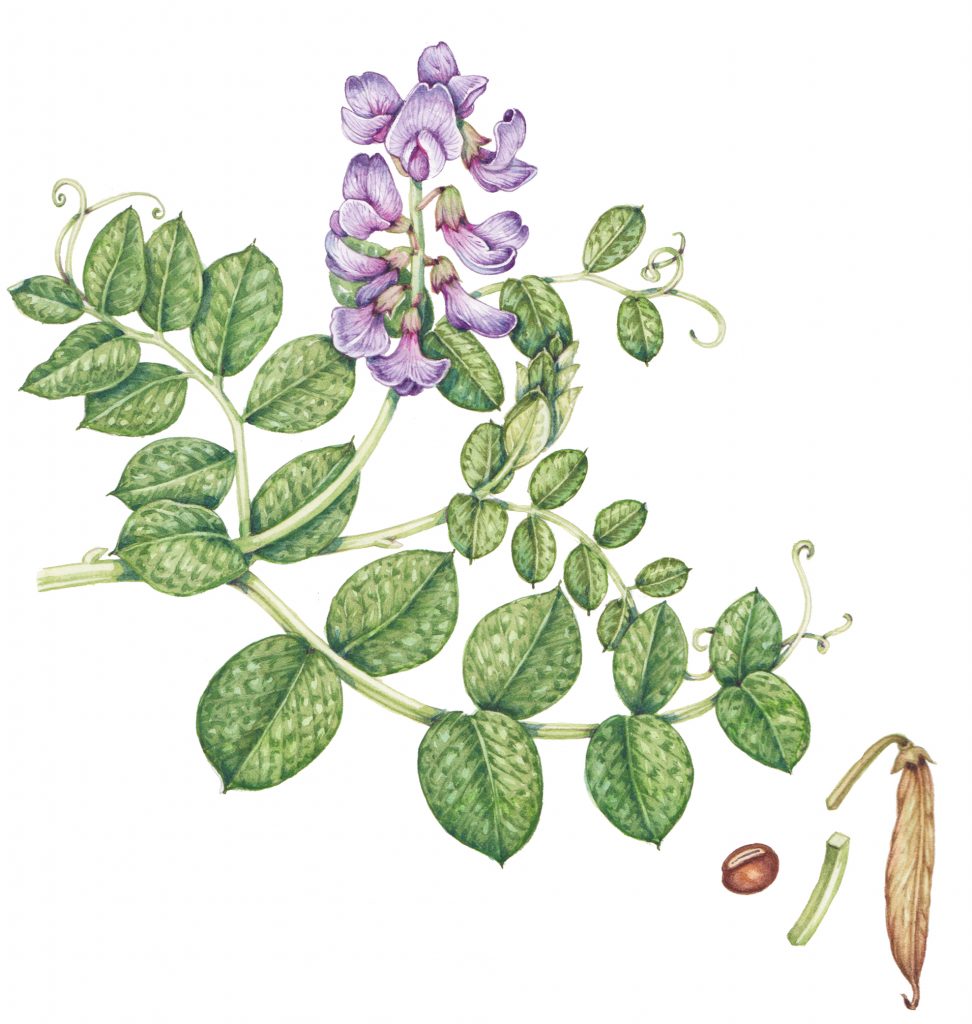 I loved this job and can’t wait for the chart featuring my illustrations of coastal flowers to be produced.  How fortunate to have a job where you do what you love, and you get to learn and assimilate new botanical facts with each new day!  As always, I’m indebted to the Naturespot, Wildflowerfinder, and Wildlife Trust websites which are treasure troves of neatly packaged, botanically accurate information. 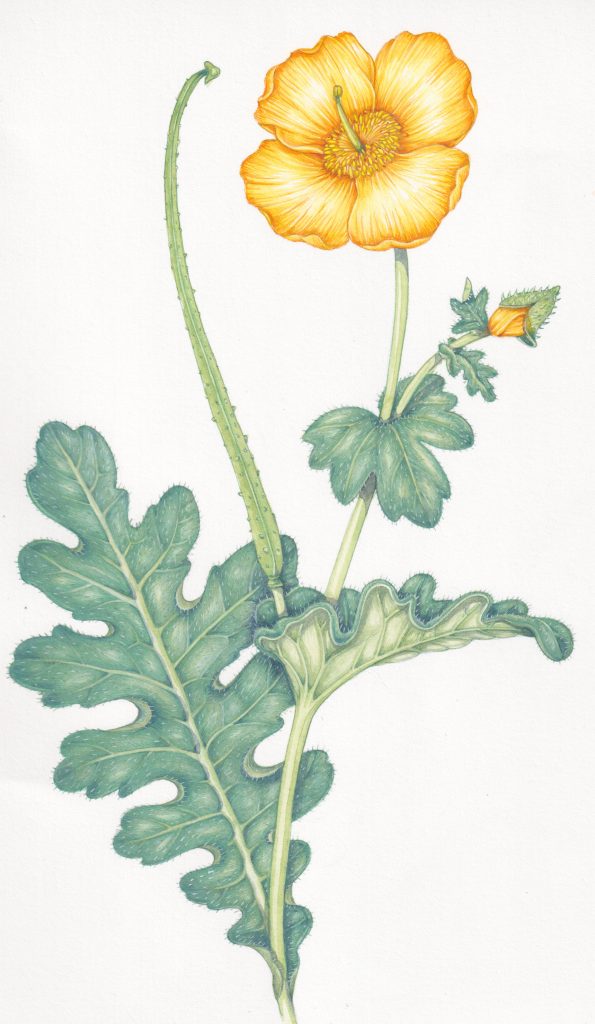