The Field Studies Council has recently published it’s latest chart; an overview of the non-native and invasive plant species seen in Britain and Ireland.  I did the botanical illustrations, and loved the variety of species on offer. 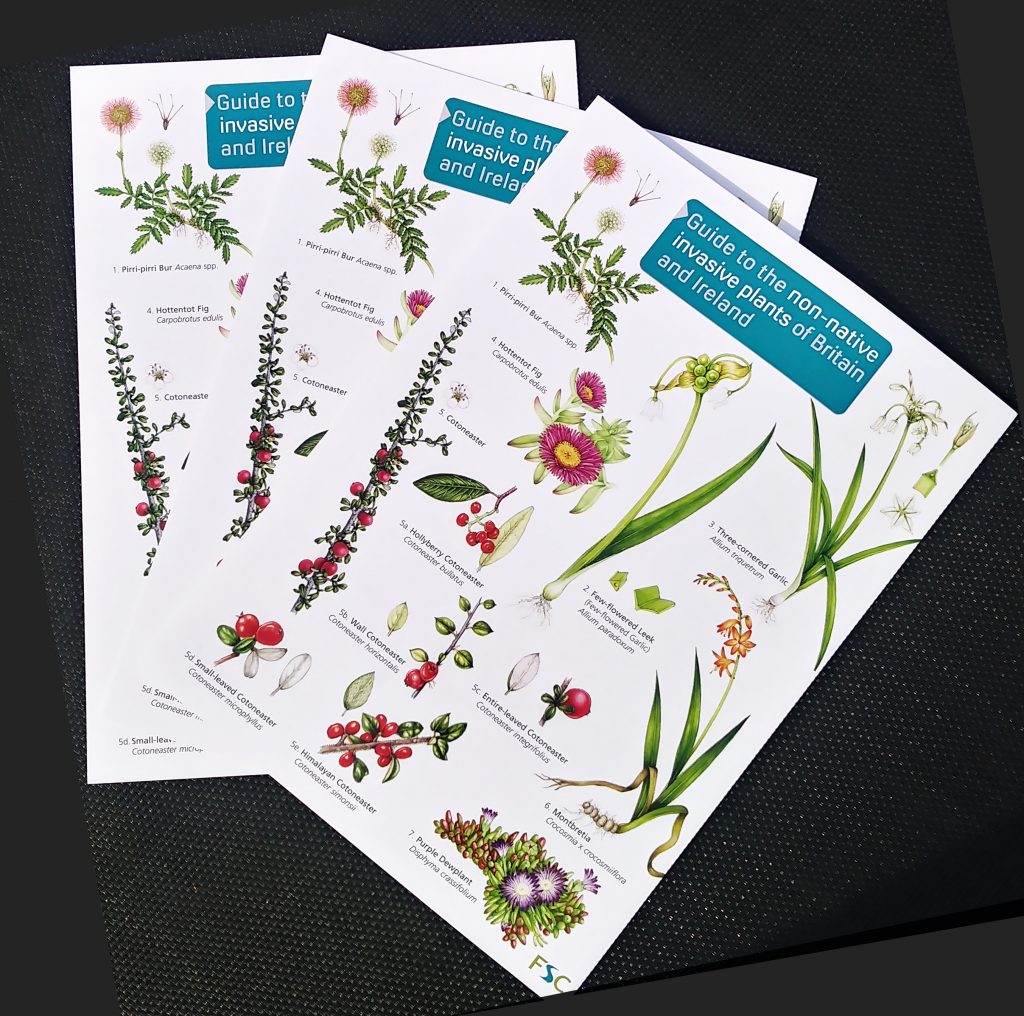 In this blog I’ll talk about how I completed some of the illustrations.

I was given a species list, and a copy of the excellent Field guide to Invasive Plants & Animals in Britain by Booy, Wade and Roy.

The species list of non native plants arrived in December, so the first challenge was to find reference.  Luckily, I take (rather bad) photos all the time, and have these named and stored on my computer.  I also have a lot of sketchbooks studies to help me out.

Some of the species were familiar as I’d illustrated them (or very similar species) before.

This was true of the Variegated Yellow Archangel, Lamiatrum galeobdolon subsp argentum .  Not only does it look very similar to the wild Yellow archangel Lamiastrum galeobdolon, but I also had a photo of this common garden plant growing near my shed to work from.  (For more on working from photo reference, have a look at my earlier blog).

In the case of the Japanese rose, Rosa rugosa, I worked with earlier illustrations.  Even in winter, this hardy rose had some leaves I could work from, so I cobbled together my illustration comparatively painlessly. 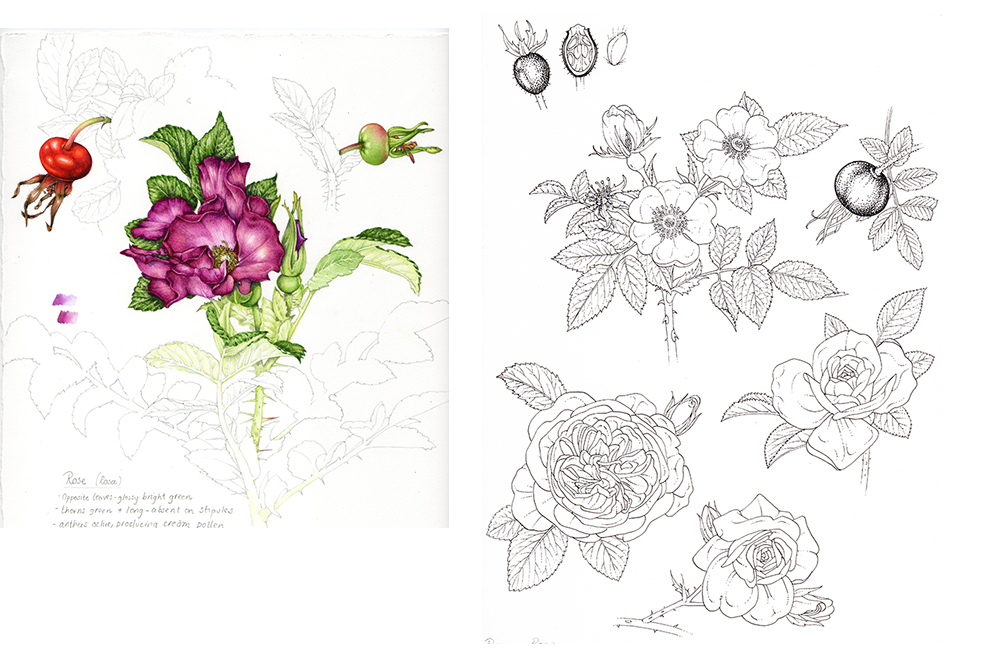 As with all my illustrations, I drew up a simple pencil line drawing (the rough) and set a scan of it off to be checked.  Once I got the go-ahead I pulled out my paint box.  I added a dollop of Opera Rose watercolour, and Quinacrodine magenta Dr Martin’s PH ink to the palette, and painted the extravagant pink petals. 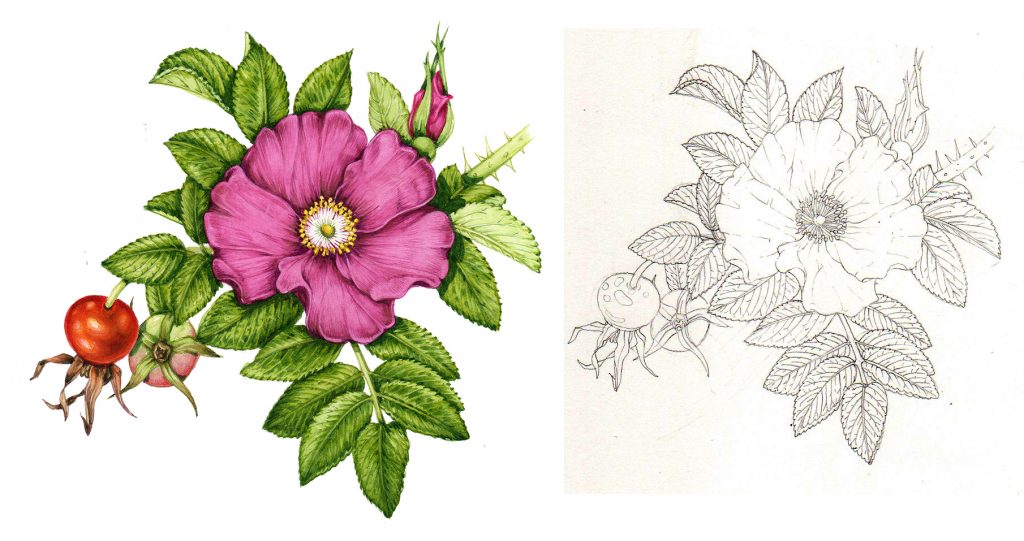 I love being told to take a pencil rough to final.  It really is rather like a lovely colouring-in task.  All the trickiest work is already done; getting the species botanically accurate,  working on the composition, and ensuring the plant has the right “feel”.  It becomes a simple matter of colour mixing, sorting out your lights and darks, and applying layers of watercolour. 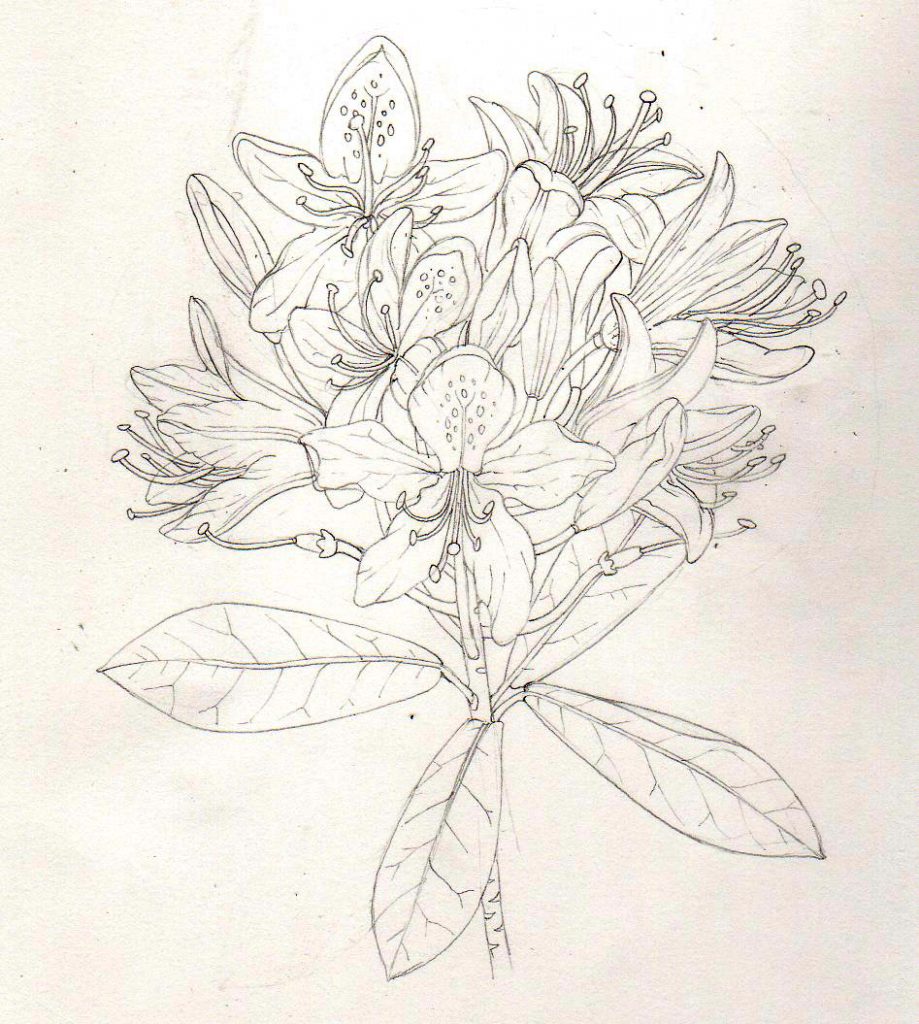 The Rhododendron, Rhododendron lutuem, is a case in point.  It’s tricky getting the array of flowers and the angle of each bloom correct.  It requires quite a bit of geometry.  Once the petals are right, the stamens and anthers need to be correctly positioned.  (The leaves are much easier, specially as they are smooth in texture and on their margins). 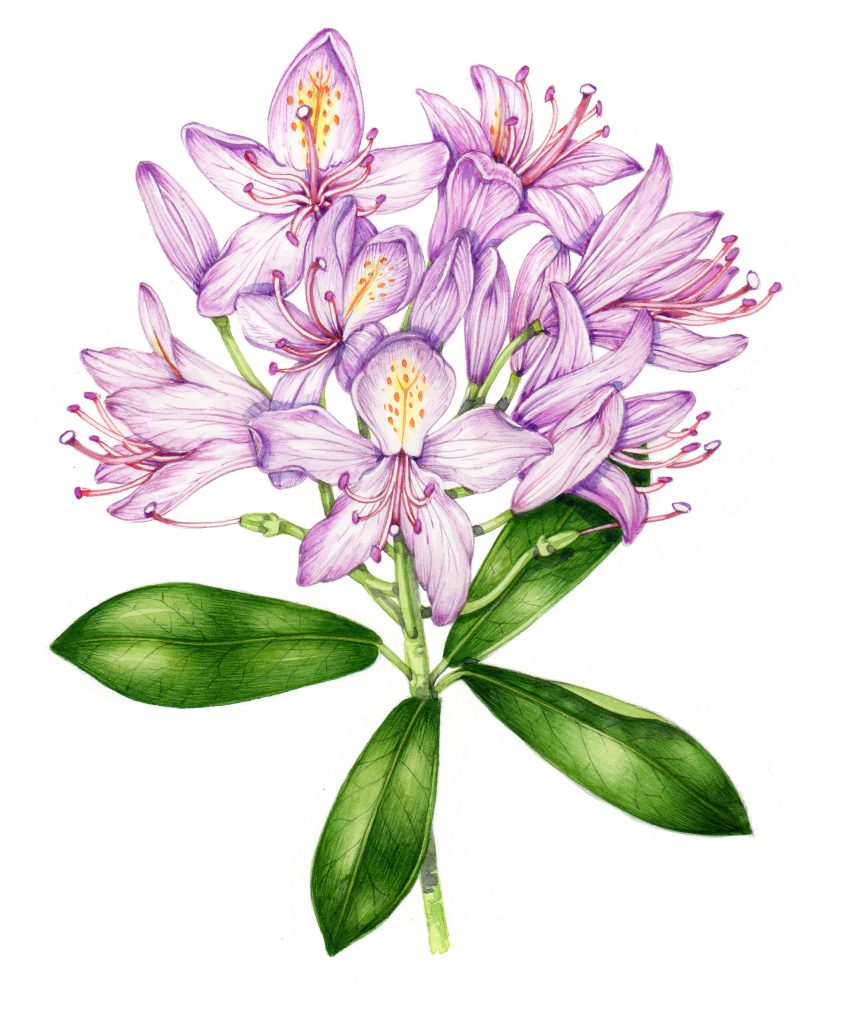 The leaves were a real joy to paint, thanks to their smooth shine.  The mauve of the flowers was exciting; so much bloom to colour!  I’m used to tiny flowers like those found on bed-straws, so these large expanses felt very indulgent.

There were some non native species on the chart that I found really difficult to sort out.  Most of these have ended up being made into recent blogs as I spent a lot of time unpicking the differences between two or more similar plants.  This was especially true of the Cotoneasters.  Over 70 species, and 5 to illustrate for the chart.  The differences between species can be tiny, and not easy to spot.  Even with the wonderful BSBI chart, I struggled. (For my blog on different Cotoneasters, click here).

I’m fond of this pretty plant, but if I never get asked to illustrate another Cotoneaster in my life I’ll be quite happy!

I also struggled with the Japanese knoweeds, Gunnera species, and how to tell Virginia and False Virginia creeper apart.

One of my favourite plants to illustrate was the Spanish Bluebell, Hyacinthoides hispanica.  There’s an elegance to the drooping leaves, and a delicacy to the pale blue flowers that I love. 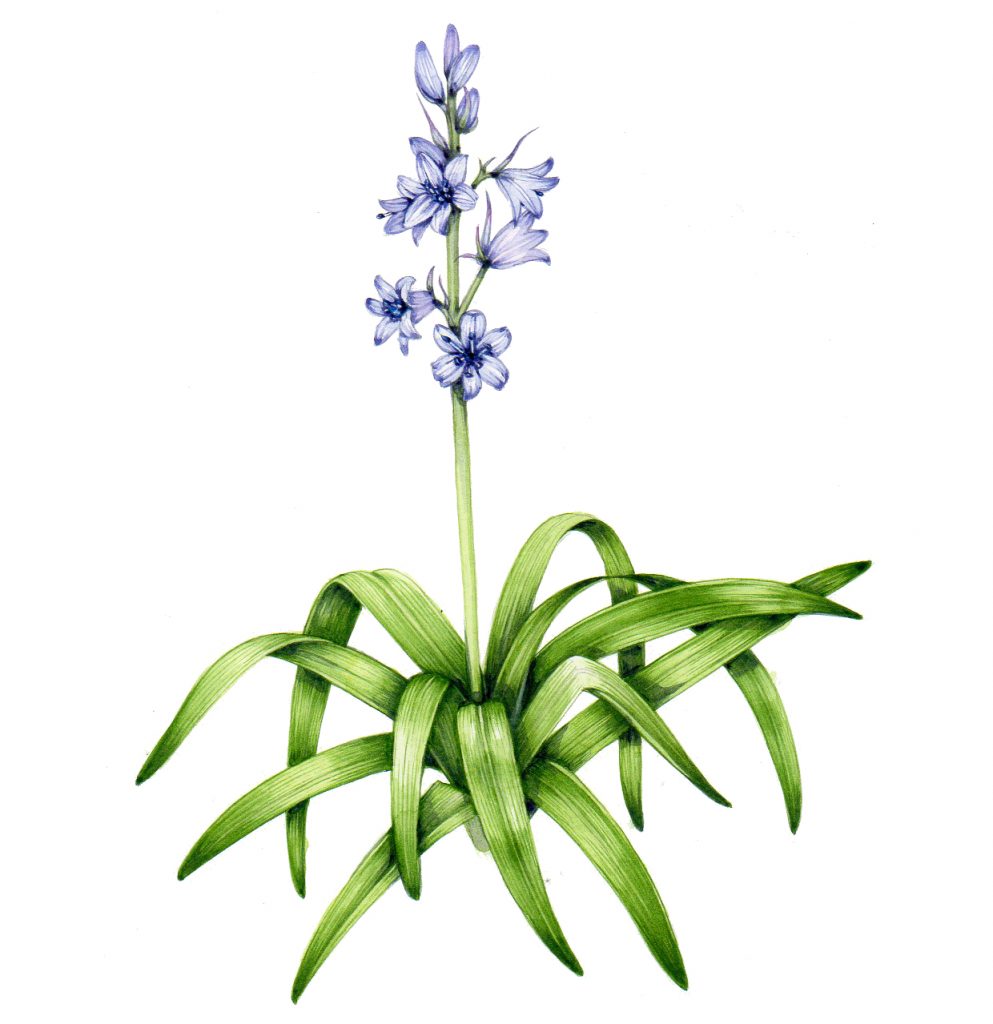 It was a joy to see that my botanical illustration, and the plant itself were a pretty close colour-match when one came into bloom recently.  Colour checking, when painting flowers in winter can be tricky. 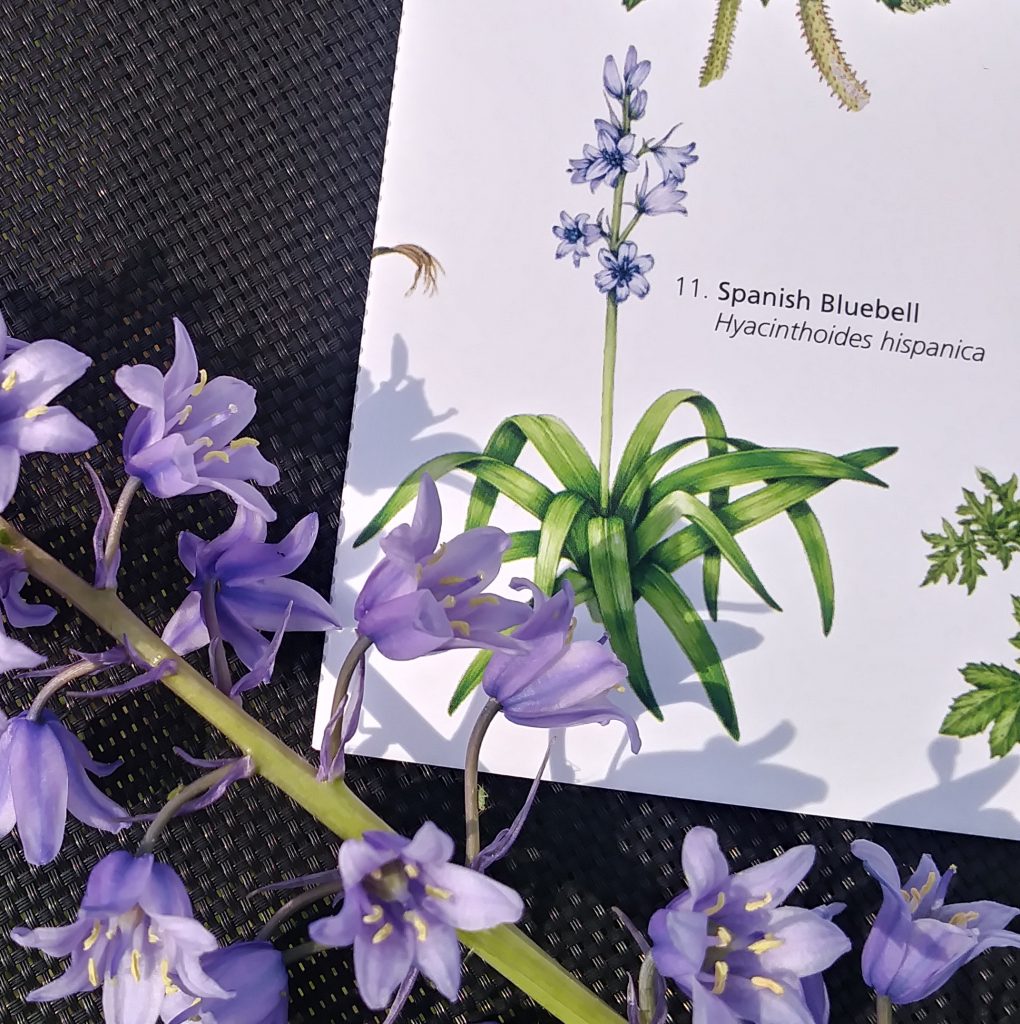 Recent research suggests that the native British Bluebell, Hyacinthoides non-scripta, is unlikely to be out-competed or totally hybridised by the Spanish form.  To tell the two species apart, check out my bluebell blog.

As you can tell, this was a job that taught me an enormous amount about plants I’d not really thought about before.  The variety was a joy to illustrate.  The fact that so many are garden escapes meant there were plenty of big and bright blooms to paint. 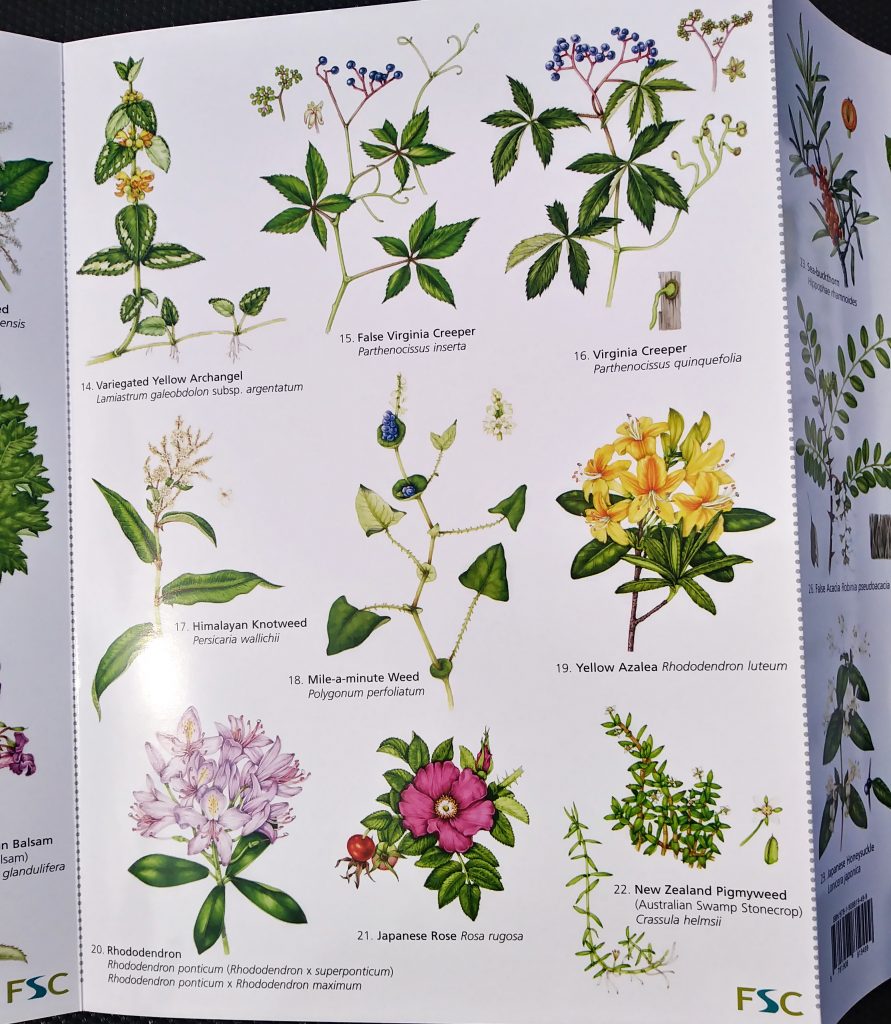 The only thing that always makes me a little uncomfortable is the language around these successful plants.  Yes, they out-compete native flora, and yes they may not be held in check by pests as they may be in their original habitat.  However, the reason these plants have been given this opportunity to thrive is down to us humans.  Scouring the globe, collecting ornamental plants for our gardens, bringing cuttings and seeds home…  Non native species are indeed problematic.  But before being overwhelmed with anger at these “invaders” and “aliens”,  let’s take a moment to remember who caused this problem in the first place.