A threatened species is identified as being likely to become endangered within the foreseeable future, where endangered species are labeled by the International Union for Conservation of Nature (IUCN) Red List to be at risk of extinction. Promoting social awareness about threatened species encourages preemptive action, fostering widespread attentiveness towards behavioral patterns that play a role in the larger narrative. Artwork by scientific illustrator Dorie Petrochko further details how works of art can be used to protect threatened species from facing extinction. 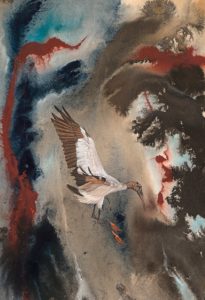 The wood stork depicted in the illustration above is a threatened species located in the Florida Everglades. While storks used to thrive in South Florida due their preference towards tropical and subtropical habitats with distinct wet and dry seasons, degradation of the Everglades habitat has caused a number of species in the area to decline. What once served as a remarkably diverse collection of animals and wildlife now faces significant consequences of human population growth, land development, and drainage programs. Works of art that help tell a story are useful in shaping public perspective because awareness of a species’ threatened status impacts thoughts on public policy. For example, this information holds weight in encouraging congress to vote in favor of funding acts like Florida’s Comprehensive Everglades Restoration Plan, designed to rebuild the wood stork’s habitat. 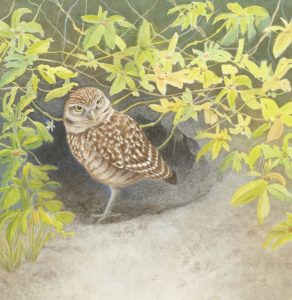 The Athene Cunicularia illustrated above is a burrowing owl also labeled as a threatened species. Studies note that programs to destroy prairie dogs and rodents alongside widespread agricultural developments have greatly reduced the amount of prey and burrows available to the Athene Cunicularia. Creating artwork that promotes awareness of these issues both discourages the extermination of needed prey species and increases familiarity with burrows amongst developers.

Scientific illustrator Dorie Petrochko has received numerous awards and fellowships for her conservation efforts, including the Don Eckelberry Fellowship Award for Wildlife Painting from The Philadelphia Academy of Natural Sciences and the Julia and David White Artist Fellowship in Costa Rica. Her ornithological graphics have reached cross-country as well as international audiences at exhibits such as the Art of the Animal Kingdom at the Bennington Gallery in Vermont, Focus on Nature at the State Museum of Albany, All Things Birds and Beautiful on Orcas Island in Washington, and the International Exhibition of Herpetological Illustration at the University of Portugal.