I plan on doing a few postings about anatomical visionary Andreas Vesalius (1514-1564) who is considered to be the father of modern anatomy.  Vesalius hailed from Flanders, and was born in Brussels, to a learned family of physicians.  He studied medicine at the University of Louvain and the University of Paris before getting his doctorate at the University of Padua.
Wood engraving portrait of Andreas Vesalius from Da Fabrica (1543)
Vesalius transformed the way anatomy was taught in the 16ht century through his teaching style and his masterpiece De humani corporis fabrica (On the Structure of the Human Body) published in 1543. Da Fabrica was the first anatomical treatise to be based on human dissection, and include accurate anatomical drawings.  After its publication the study of anatomy would be transformed! 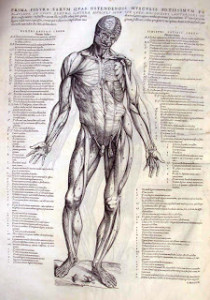 Anatomical drawing from Da Fabrica (1543) by Jan van Calcar
While a medical student Vesalius noticed discrepancies between what he was seeing in human dissections and what the professor was describing.  At this time the study of anatomy was based on the writings of Galen. Galen, an ancient Greek physician and anatomist, believed the anatomy of humans and animals was interchangeable, hence the discrepancies Vesalius encountered.  Anatomy professors at this time were removed from the act of dissection and often sat on a throne, beautifully dressed, reading from the writings of Galen. 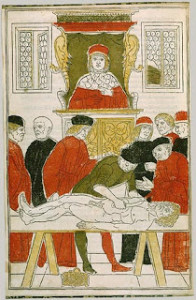 Venetian wood cut from 15th century showing anatomy teaching and dissection.
When Vesalius started teaching anatomy at the University of Padua he decided to do the dissections himself and set the anatomical record straight.  He found that doing large schematic drawings aided his students in understanding what they were seeing.  This was the inspiration for Da Fabrica.