In my last post I mentioned that the last two years of Vincent van Gogh’s life were his most prolific.  During those last years he lived in Arles and St. Remy in Provence and Auvers in Normandy. My last post discussed his time in Arles before moving to St. Remy, where he lived from May 1889-May 1990.
“Garden at Saint-Paul-de-Mausole”by Vincent van Gogh, 1889, oil on canvas
When van Gogh arrived in St. Remy he entered the asylum of Saint-Paul-de–Mausole.  Because of his fragile mental health van Gogh was not permitted to leave the grounds of the asylum. It’s walled gardens, filled with pine trees, lilacs, roses and irises, gave van Gogh a peaceful place to paint directly from nature. He wrote his brother Theo “When you receive the canvases I’ve done in the garden you’ll see that I’m not too melancholy here”. The masterpieces he created on the asylum grounds include “The Irises” and “Starry Night”. 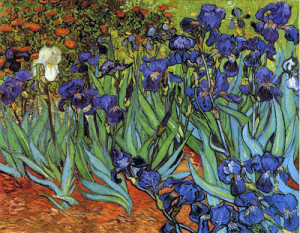 Many of the paintings van Gogh created in St. Remy are from direct observation. However  “Starry Night”, which represents the nighttime view from his hospital room, was painted during the day and from memory.  Considered by many to be van Gogh’s most important work “Starry Night” shows his comfort with using the landscape to inspire his imagination. 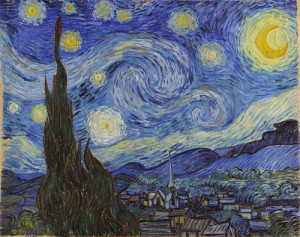 After a few months van Gogh was allowed beyond the asylum grounds to paint in the surrounding countryside. The resulting masterpieces include “Olive Trees” and “Cypresses”. 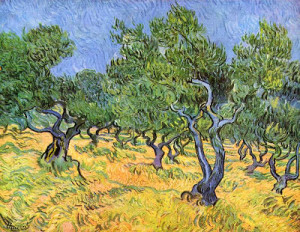 From his room van Gogh painted some of his most beloved still lives including the “Still Life: Vase with Pink Roses”.  The roses were originally pink and contrasted with the stark green background.  Over time the pink has faded and left a stunning, subtle painting of white roses. 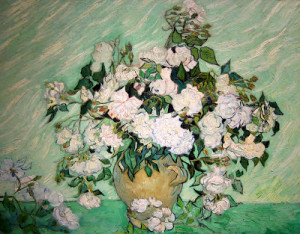 The asylum at Saint-Paul-de-Mausole is still in existence and open to the public.  I visited there in the spring of 2012 and was able to walk the lovely gardens that inspired van Gogh. I also visited his small room where so many masterpieces were created!

View of the garden at Saint-Paul-de-Mausole, 2012. Photo by Marie Dauenheimer.

In May of 1890 van Gogh decided to leave the asylum at St. Remy and move north.  Afraid that living in Paris would be too difficult he sought the council of painter Camille Pissarro.  Pissarro suggested van Gogh move to Auvers-sur-Oise in Normandy, about 20 miles from Paris.  It was here that he would become a patient of Dr. Gachet, live out the last months of his life, and experience his most prolific painting interval.