Trees: Hawthorn is another blog inspired by my illustrations for “The Tree Forager” by Adele Nozedar, recently published by Watkins.  It’s inspired me to have a look at a few of my favourite trees.  The Hawthorn is another in this series, along side the Sycamore and the Oak.

Hawthorn Crataegus monogyna is one of the commonest trees in the British countryside, ranging from the far south to all but the most northern areas.  Although there are tons of mature hawthorn trees, both in woodland, fields, and uplands;  you also see it in hedges and scrub-land. 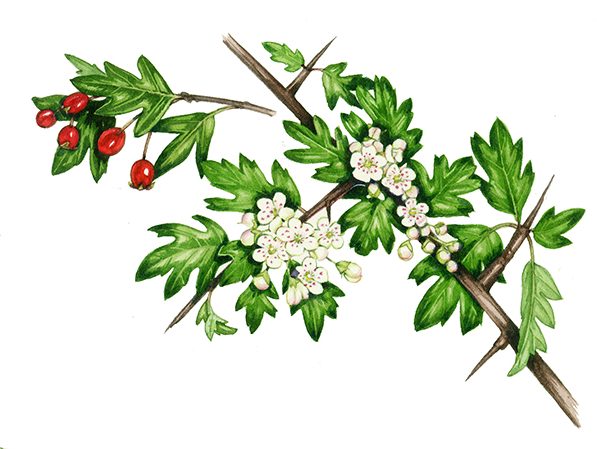 This tree provides one of my favourite sights in mid-winter.  A branch of hawthorn, still heavy with crimson berries, festooned with the pale ashy greys and greens of lichen is a thing of real beauty.

The trees can live for hundreds of years, often all that’s left of a long-vanished hedgerow.  Sometimes growing in harsh climates, their twisted and gnarled shapes make individual trees into landmarks.

Hawthorn trees are a modest 2 to 10 metres tall.  They have a straggly habit, often with emergent branches.  They often appear alone, perhaps on a limestone outcrop, or in the middle of a field of grazing sheep.

Having been used for centuries as a hedging plant, they frequently appear along field margins; both within hedges, and as remnants of hedgerows which have long since been neglected. 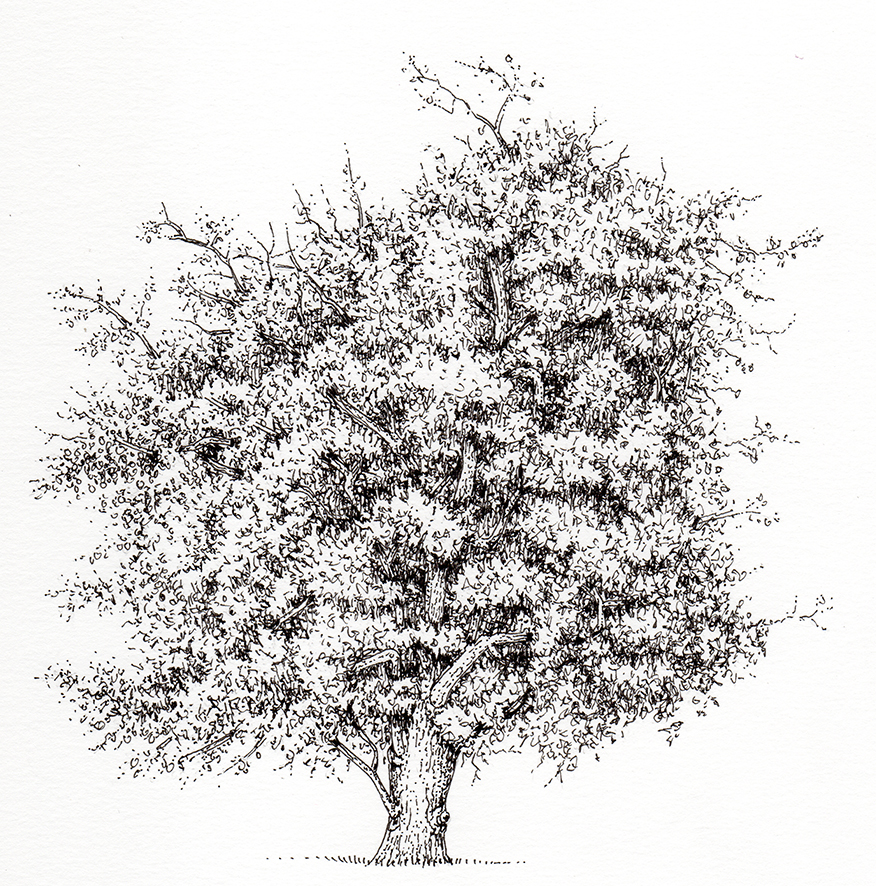 In winter, these can be confused with the branches of the Blackthorn Prunus spinosa which also bear spikes, although Blackthorn branches tend to look darker and more condensed than the hawthorn.  Also, the buds of Blackthorn grown on the spines themselves, whilst those of hawthorn emerge from the same point as the spines.

In summer and autumn, it’s hard to mistake a hawthorn for any other species.  The distinctive leaves, white flowers, and crimson berries make it a simple tree to identify. 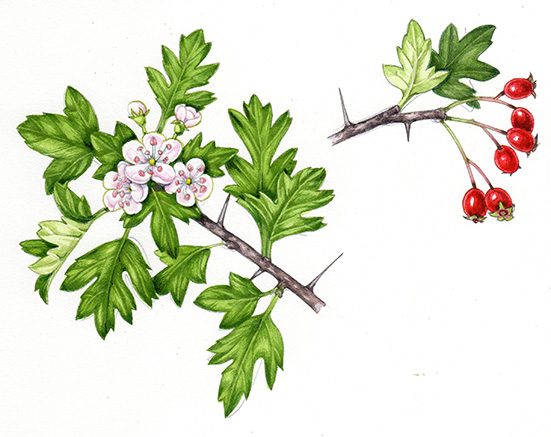 Hawthorn leaves start out as a vivid, pale, spring green.  They become tougher with age, ending up a dusty dark green colour.  Undersides of the leaves are paler.  The leaves are deeply divided, and toothed. 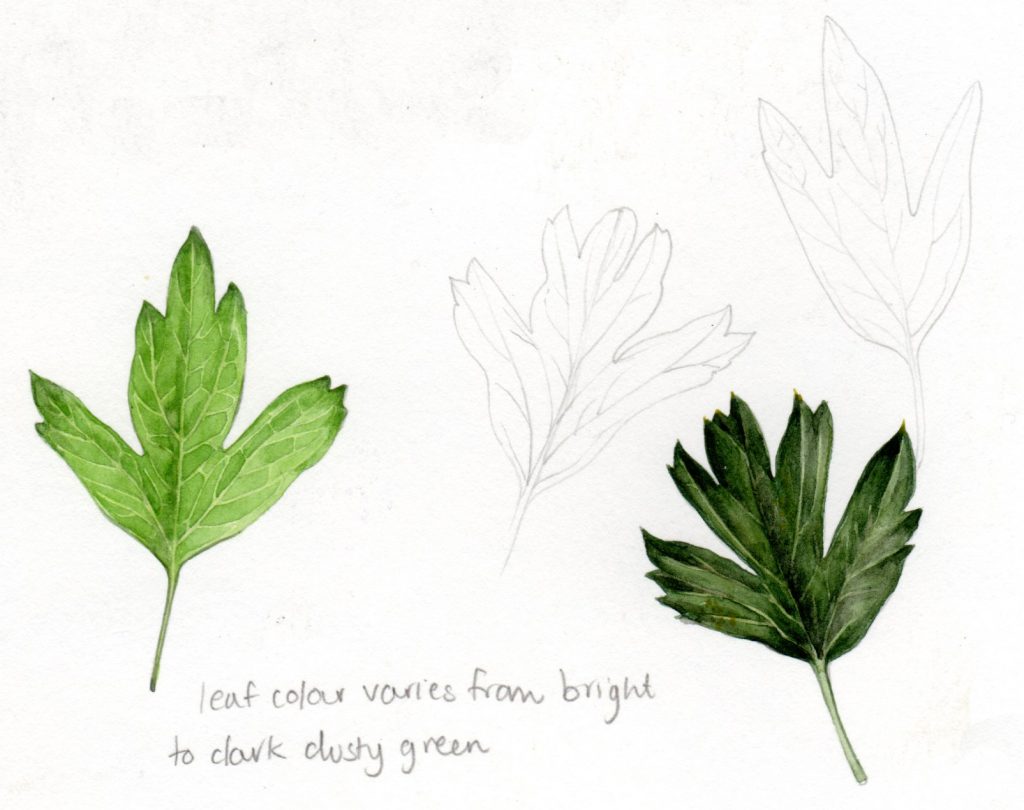 They’re about 6cm long and are often asymmetrical from the main rib.  Leaf shape is highly variable, even between the leaves on one branch.  Leaves turn yellow in autumn, before falling, leaving the berries behind. 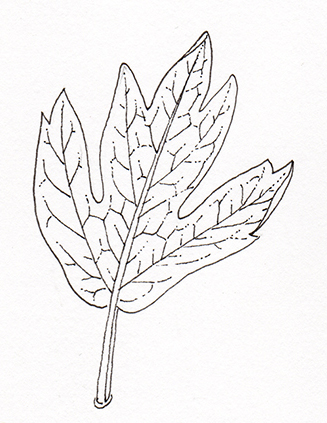 Flowers are white or pink, with five petals.  Anthers are a pinkish colour, turning to purplish or brown.  These flowers appear in May (hence the hawthorn’s other name) and form frothy masses in the hedgerows.  They grow in flat-topped inflorescences. 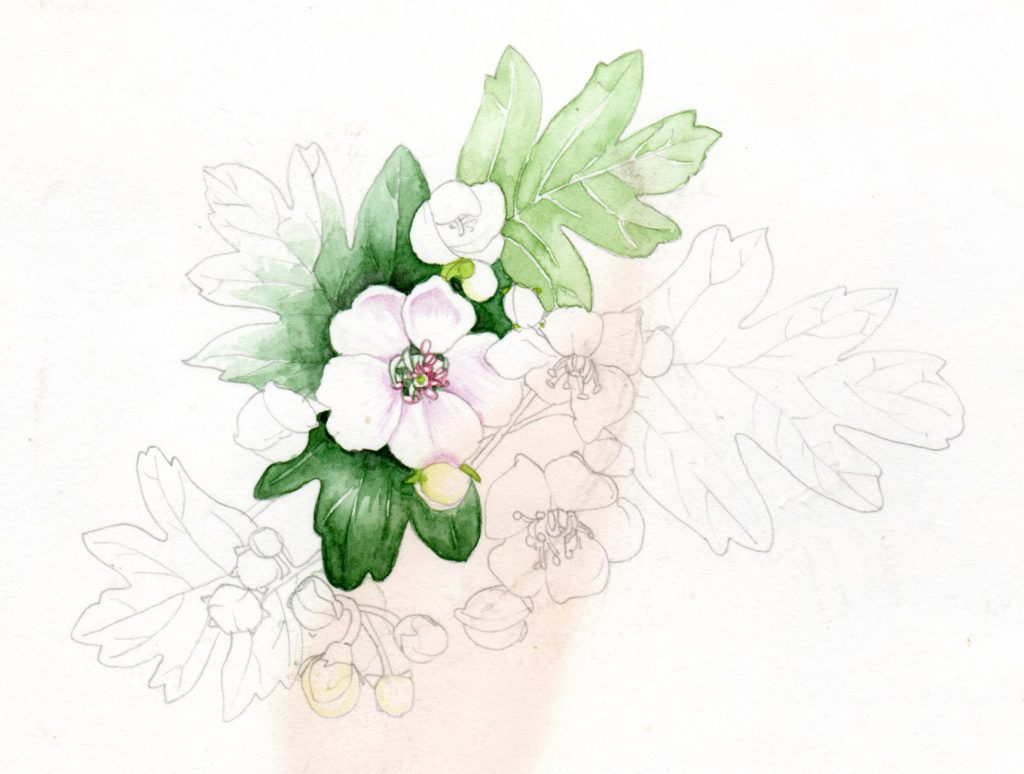 Their smell is sickly sweet, and flies love it.  Lots of people think it smells a bit unpleasant, and reminiscent of death.  This is no surprise, the chemical trimethylamine appear both in corpses and in hawthorn blossom.  In fact, people used to say that the flowers smelt very similar to the stench of bubonic plague.  This probably accounts for the custom of never bringing hawthorn inside the house. 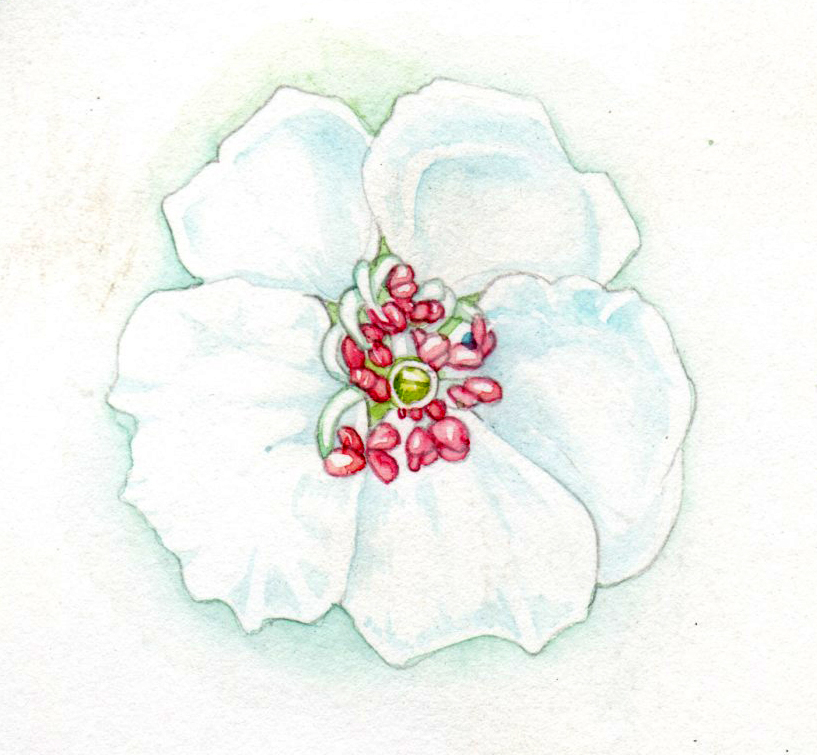 The berries of hawthorn are crimson, with yellow-orange flesh.  They’re referred to as “haws”.   Each one has one big pip in its centre. 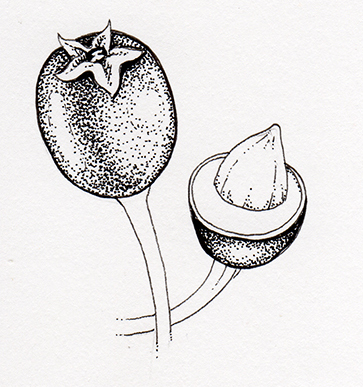 The haw skin is shiny, and can be anything from vivid scarlet to an almost purplish deep crimson in older berries.  The fruits are a great source of vitamin C, and can be made into jelly.  More importantly, they provide vital nutrients for birds such as Redwing and Fieldfare, especially in the depths of winter. 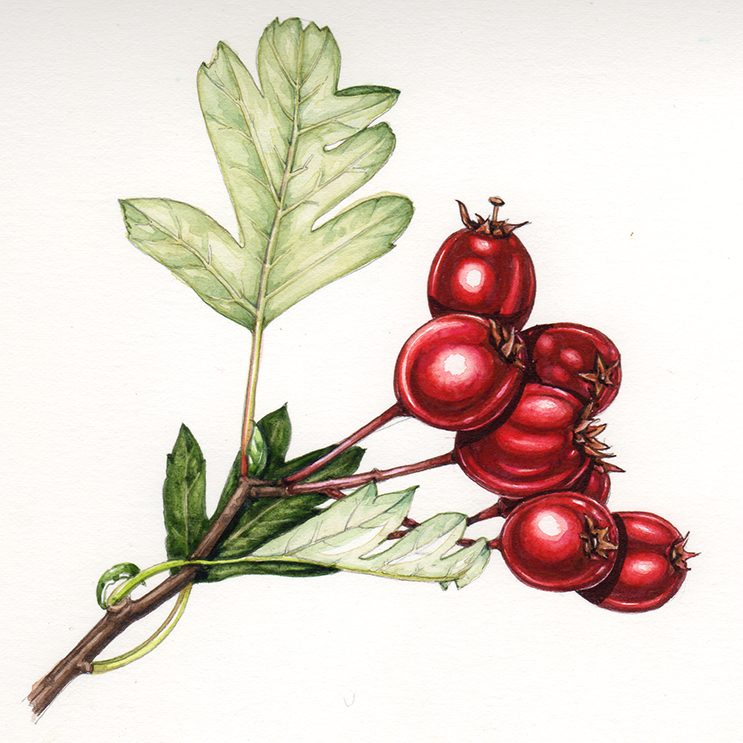 Hawthorn bark is grey brown, with lots of small scales.  As hawthorn is so prevalent, you may well see it in hedges and waysides where the plant may not be large enough to have a proper identifiable tree-trunk.

Habitats vary too.  Midland hawthorn is more of a tree than a hedge species, and is more tolerant of shade.  It likes chalky soils and is often found deep within shaded woodland.

Most garden cultivars are Midland, rather than Common hawthorn.

Hawthorn is thick with foklore and superstition.

I have a friend from Ireland who was furious when I put a hawthorn log on the fire, and opined that the “wee folk” would come and get me.  He was dead serious, and from the look on his face that was NOT something one wanted to happen, so I took the log off again.

There are many tales of Fairy queens and supernatural beings living in hawthorn.  To damage any part of the tree, especially of a lone tree, could bring down their fury with disastrous and fatal results. 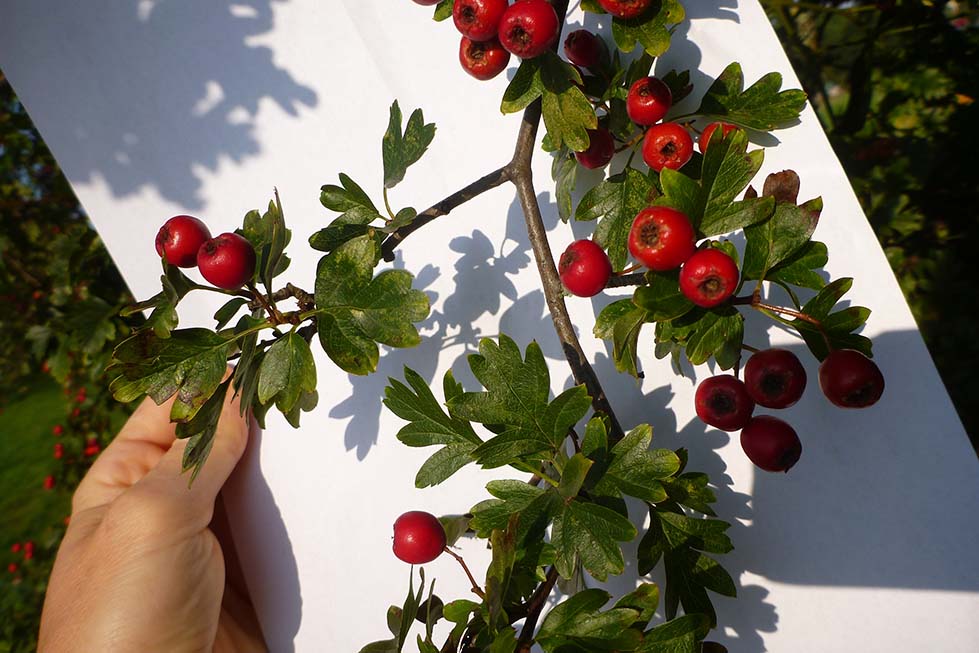 As mentioned above, the smell of hawthorn is similar to that of a corpse, so it was not brought into the house.  To do so would be to invite illness and death in.  There’s a possibility that this referred especially to the Midland hawthorn, which was more prevalent in the 16th – 18th centuries and has a stronger smell than the common species. 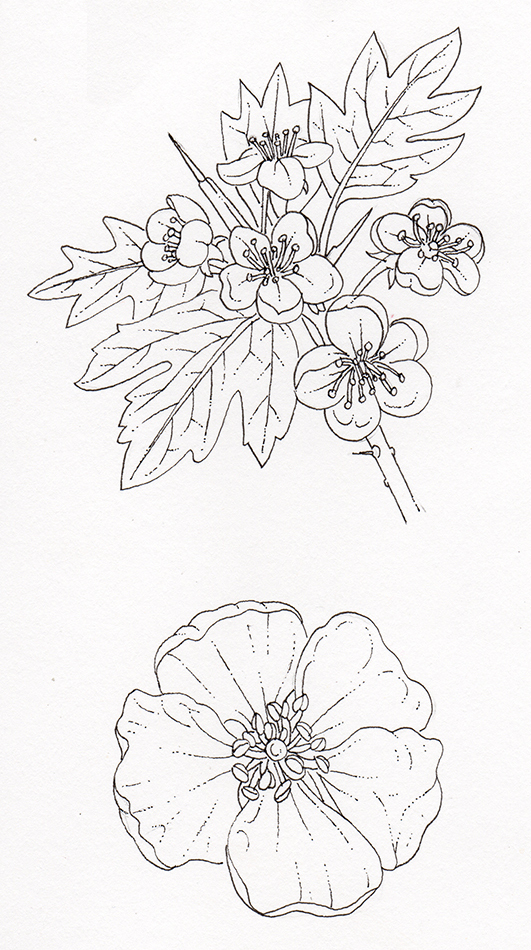 However, boughs of May (hawthorn) would be put outside houses, and decorated with wild flowers.  Having the flowers outside was clearly not seen as a bad thing.

Before the Gregorian calendar was introduced in 1752, the month of May arrived a little later than it does now.  The timing of the hawthorn blossoming probably dove-tailed more accurately with the start of the month, and with May day.  The old adage, “cas’t ne’er a clout [vest] til May be out” refers to the blossom, not the end of the month.

There are many associations with pre-Christian religions.  Westminster Abbey is built on a site called “Thorney island”, after a sacred grove of hawthorn that grew there.

It’s the sixth tree of the Celtic Ogham religion, associated with love, protection, and the heart. 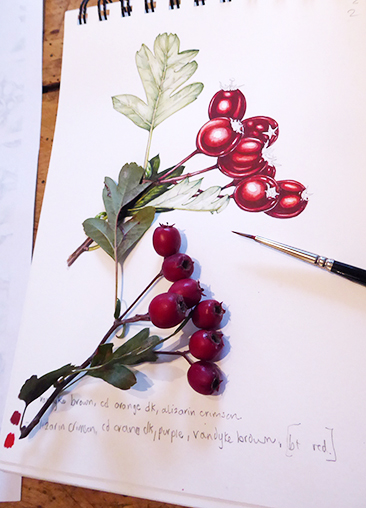 The flowers, coming as they do in the full burst of spring, have long been associated with fertility.  The Hawthorn tree was the precursor of the maypole.  Blossoming occurred around the time of the Celtic festival of Beltane.  Weddings often occurred at the same time, and there are records of boughs of Hawthorn being put on the beds of newlyweds to bring love and fertility.  How this tallies with the fear of inviting illness and death is unclear.

On May day, the May queen and the Green man would unite and bless the land with fertility for the coming year.  Hawthorn blossom played an important part in the ceremony.

Interestingly, the link between faith and the hawthorn did not stop with the onset of Christianity.  The crown of thorns and Moses’s burning bush are said to be hawthorn.

There’s also the legend of the Holy thorn of Glastonbury, planted by Joseph of Aramathea, who owned Jesus’s tomb.  He was also Mary’s uncle, and happened to be travelling with a chalice of Jesus’s sweat, and one of Jesus’s blood.  As you do.  Stopping, he thrust his staff into the ground where it grew into the Glastonbury hawthorn.  This plant (not, of course, the original tree) still grows on Glastonbury tor, and flowers twice a year; once in May and once at Christmas.  What Joseph used to replace his lost staff is lost in the mists of time.

Hawthorn leaves were eaten, referred to as “bread and cheese”, and haws were used for jellies and wines.

Medicinally, it was used in tincture to aid a whole slew of complaints: heart-trouble, anxiety, and loss of appetite.  In traditional Chinese medicine, it’s used to lower blood pressure. 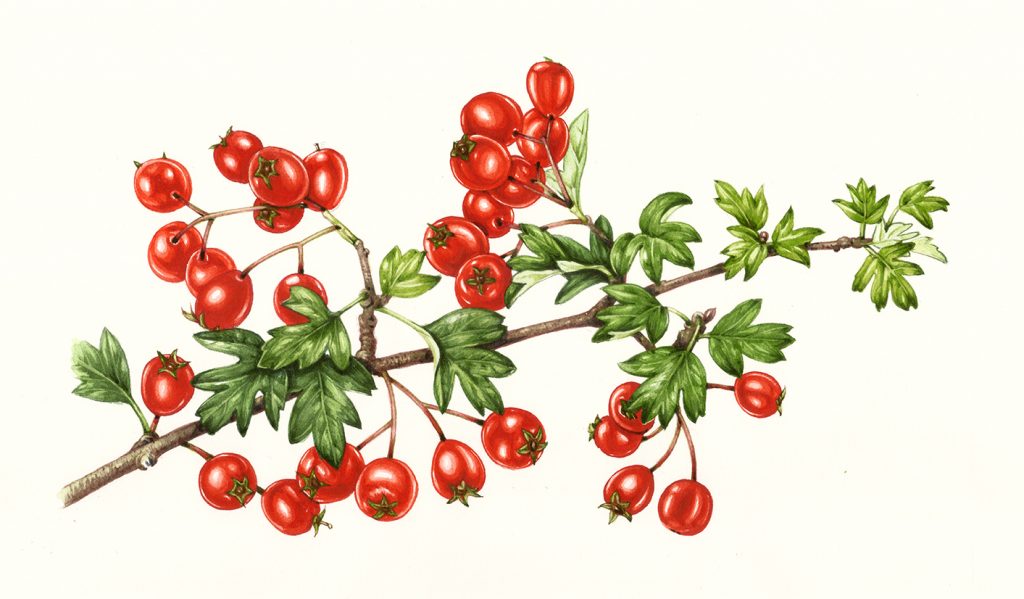 Hawthorn has been used since the 16th century, when land enclosure first took off, as a hedging plant.  It forms spiky, impenetrable barriers.

It’s wood is hard and pale, and is used for wood-turning, veneers, and tool handles.  It burns at high temperatures, so is good for fire-wood and charcoal.  As long as you’re not worried by the folklore and superstitions, that is…

Young leaves are edible, as are the berries.  Berries are best made into jams and ketchups as they may cause mild stomach upsets in some.  Buds are delicious in salads.

It is a wonderful plant for both birds and insects. Not only can birds feed off the berries in winter, but the growth habit and thickets makes a perfect space for building nests. 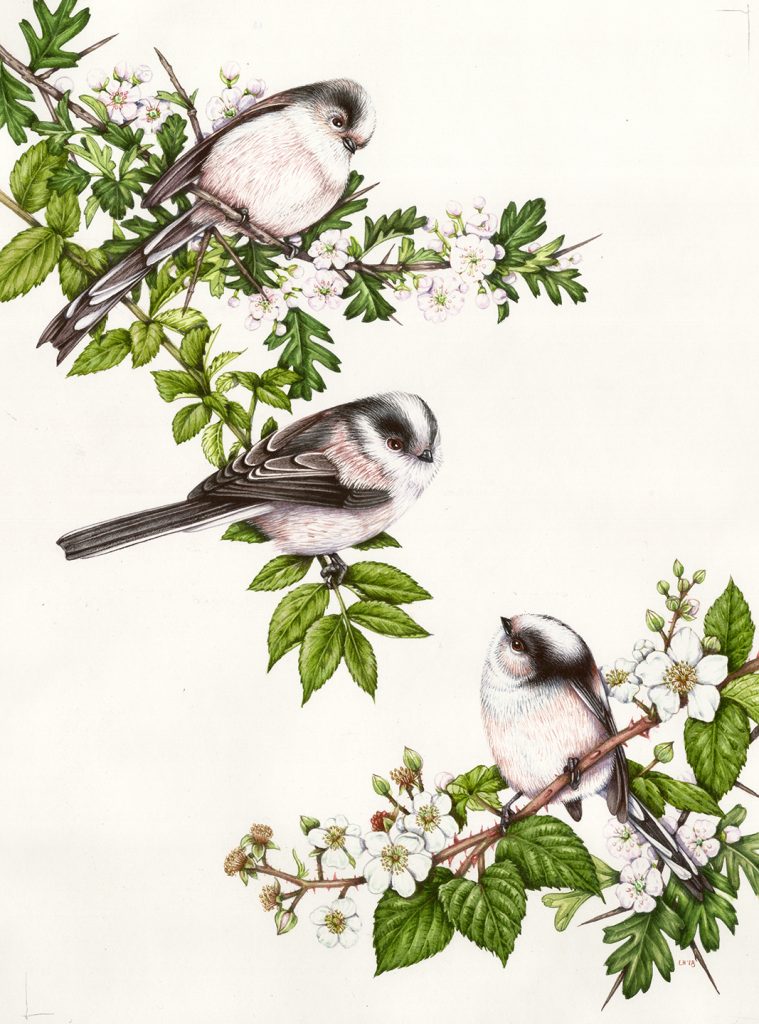 Long-tailed tits Aegithalos caudatus in amongst Blackberry and Hawthorn blossom

Over 300 species of insect rely on the Hawthorn.  Moths relying on it range from the Lappet moth Gastropacha quercifolia, which resembles dead oak leaves as an adult, to the Light Emerald Campaea margaritata.  The latter turns up in my house on late summer evenings, and is a beautiful animal.

Bees, flies, and wasps pollinate the flowers and rely on the nectar.

Small mammals such as the Dormouse also eat the berries, which are packed full of anti-oxidants. 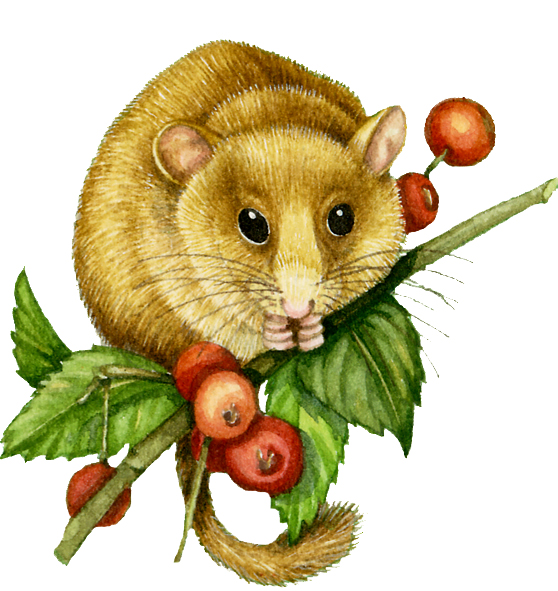 Hazel dormouse Muscardinus avellanarius with berries, (but not Hawthorn berries)

Hawthorn is a popular and wise choice for those wanting to encourage wildlife to their gardens.

Increasingly, hedgerows are being grubbed up to allow access to more efficient farm machinery.  Old hedges, which need a lot of maintenance, ore often replaces with barbed wire.

Hawthorn can be affected by fire blight, gall mites, and aphids.  However, there’s no suggestion that the hawthorn is about to disappear from out landscape, which is a big relief. 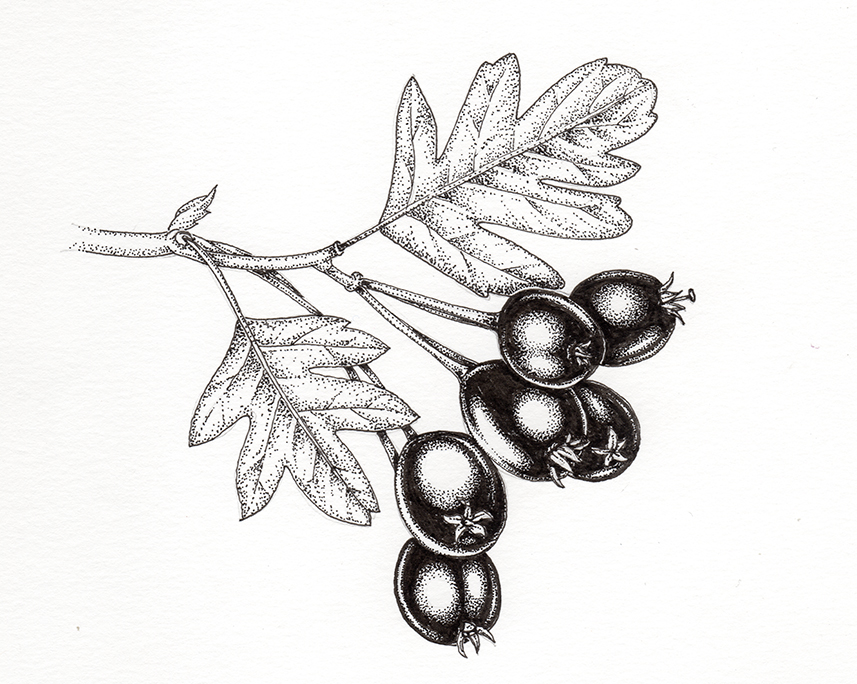 Hawthorn is common, and easy to recognise.  It’s flowers and berries make it a well loved tree and shrub, and it’s usefulness in hedging can’t be underestimated.  Providing a haven for wildlife, a wealth of history and folklore, and bearing edible leaves and berries; there’s a whole lot to recommend this tree.  It’s also very beautiful.

Sources for this blog include websites of The Woodland Trust, Trees for life, the Green Parent, and Naturespot. 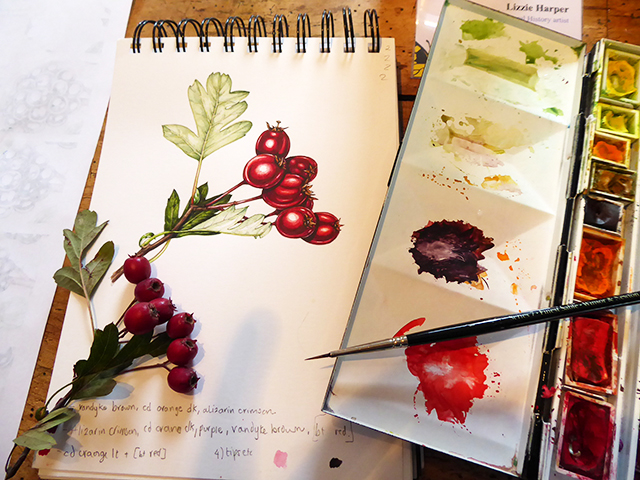