The Gwent levels are a fascinating corner of Wales, tucked between Cardiff and Newport.  They are sometimes overlooked by those of us who live nearby.

I was recently asked to illustrate some of the plants that grow there for a fold out identification chart, to be produced by Field Studies Council publications. 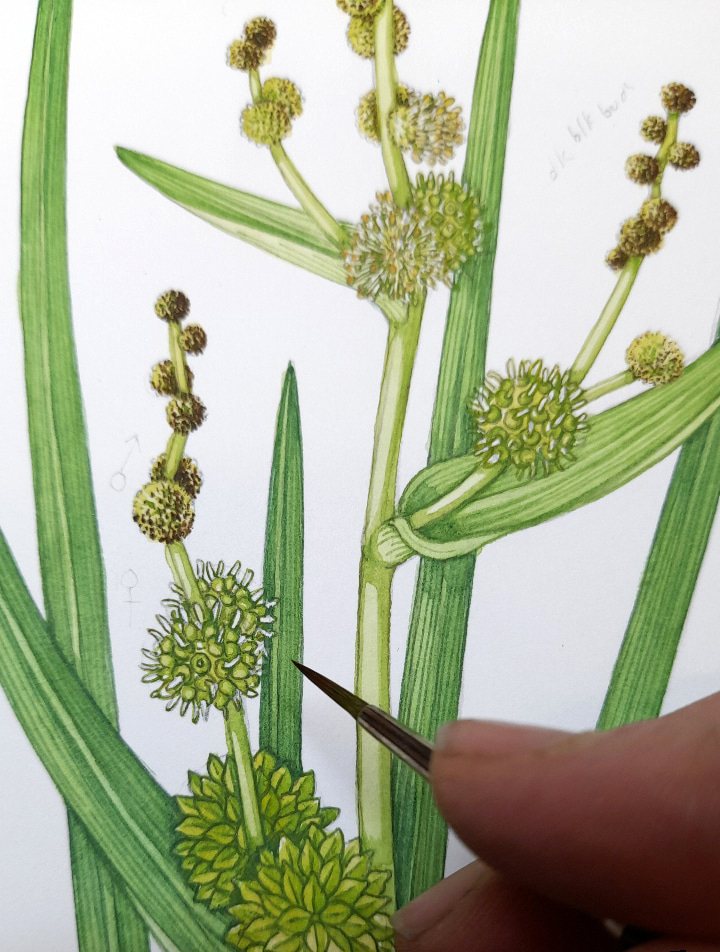 A Little about the Gwent Levels

Shockingly, I knew nothing of the Gwent levels before starting on this job.  It turns out these managed waterways stretch over 900 miles, and have been farmed and cultivated since Roman times.

They’re a wildlife haven for animals and plants, being an important area for migratory birds.

Otters, dormice, grass snakes, and lapwing live here; alongside insects like the Emperor and Hairy dragonfly. 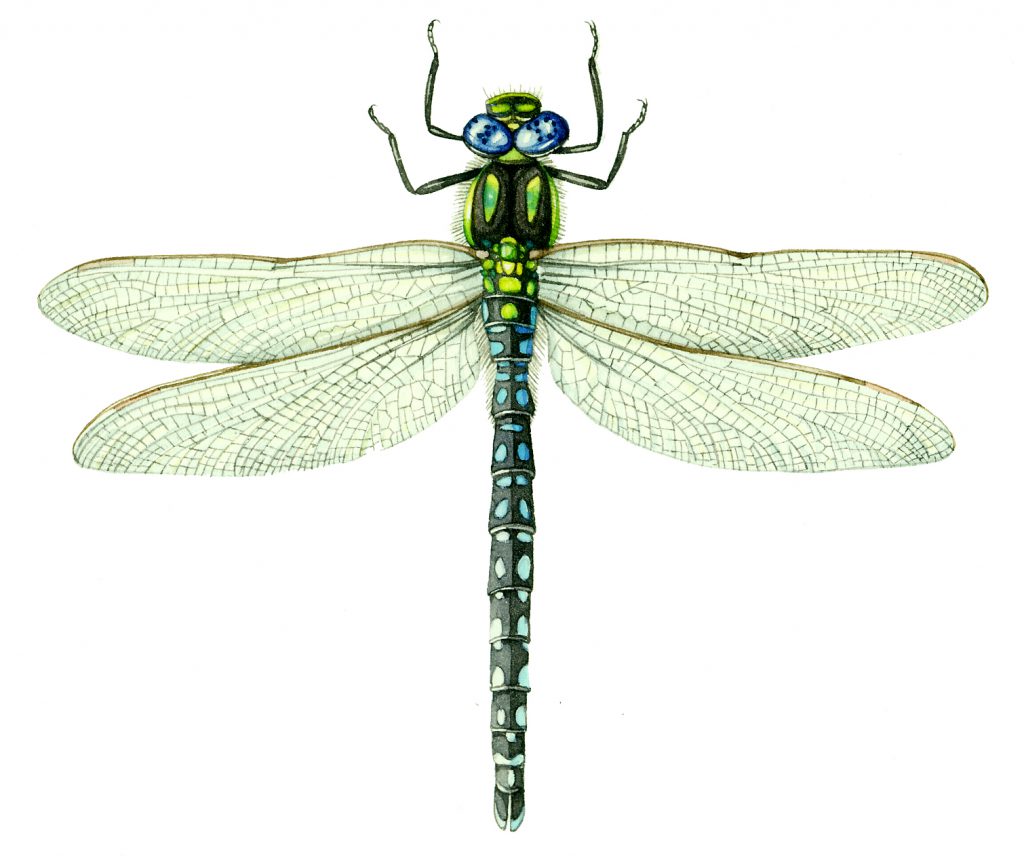 There are rare species too; the Common crane Grus grus is nesting here again, after an absence of more than 400 years.  In Roman times, they were more common.  At the Roman baths in Carleon, a small amulet has been found, with what looks like a crane on it.

In 2012, the protected species Water vole Arvicola amphibius (which had become locally extinct), was successfully re-introduced at Magor Marsh Nature reserve.  They have now spread out across the levels. 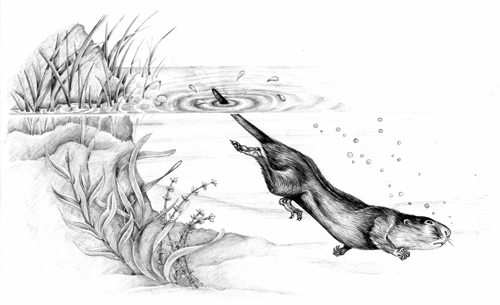 An otter and a water vole were required for the leaflet.  Luckily I already had various illustrations of these animals completed, so it was a matter of the client choosing which image to use. 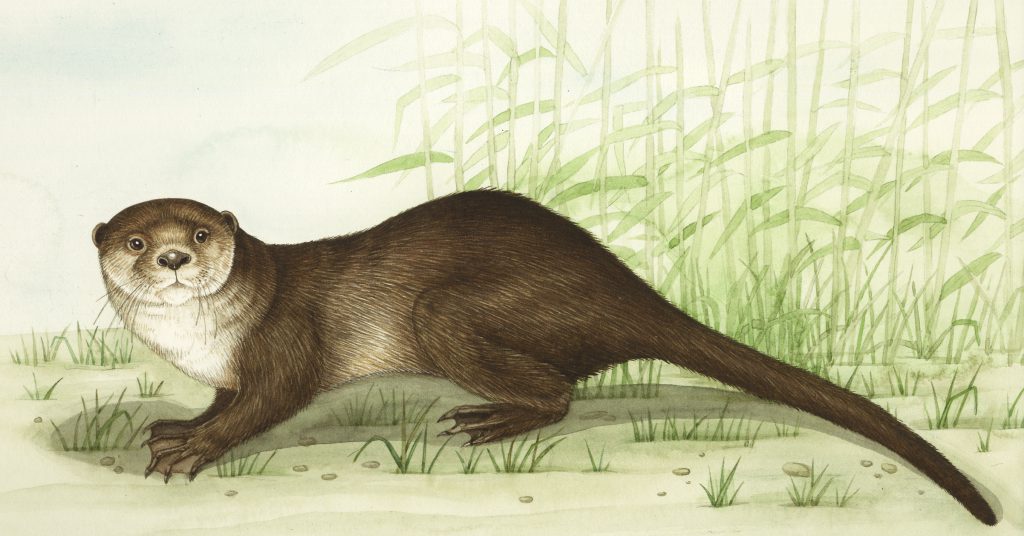 As I’ve not yet seen the finished leaflet, I don’t know which was chosen!

As with the animals, I already had illustrations of some of the required species completed.  However, there were plenty of new paintings to do.

The first step is to draw up the species in pencil.  The challenge posed by the plants in this list is that they’re aquatic.  This means you have to include information on the water level.  Leaves often are differently shaped according to their position on a plant.  They may float, be above water level, or grow below the surface.

A case in point is this rather beautiful species, the Arrowhead Sagittoria sagittoria. 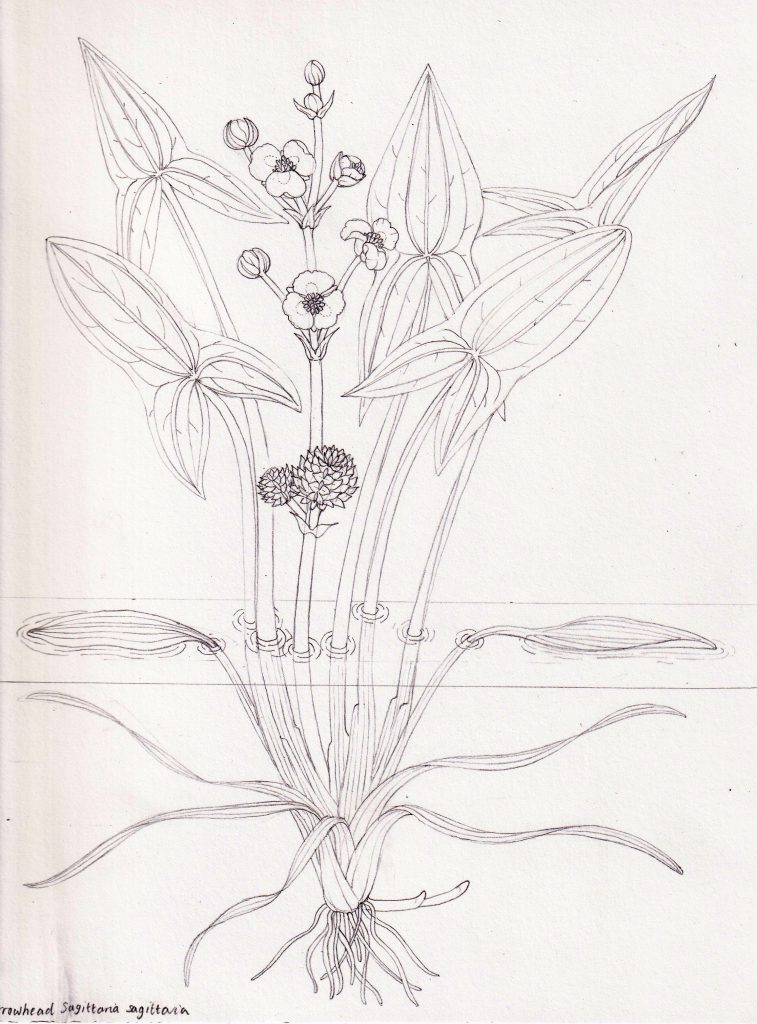 As you can see, it has a slew of different shaped leaves.

Drawing the leaves the correct shape is simple enough, the challenge is making sure they appear to be emerging, floating, or growing below the water surface.

When it comes to the final illustration, the depiction of water needs to be clear, but not heavy-handed.  You should know what information it conveys, but not be distracted from the plant by the ripples.  This can be a difficult balance to strike. 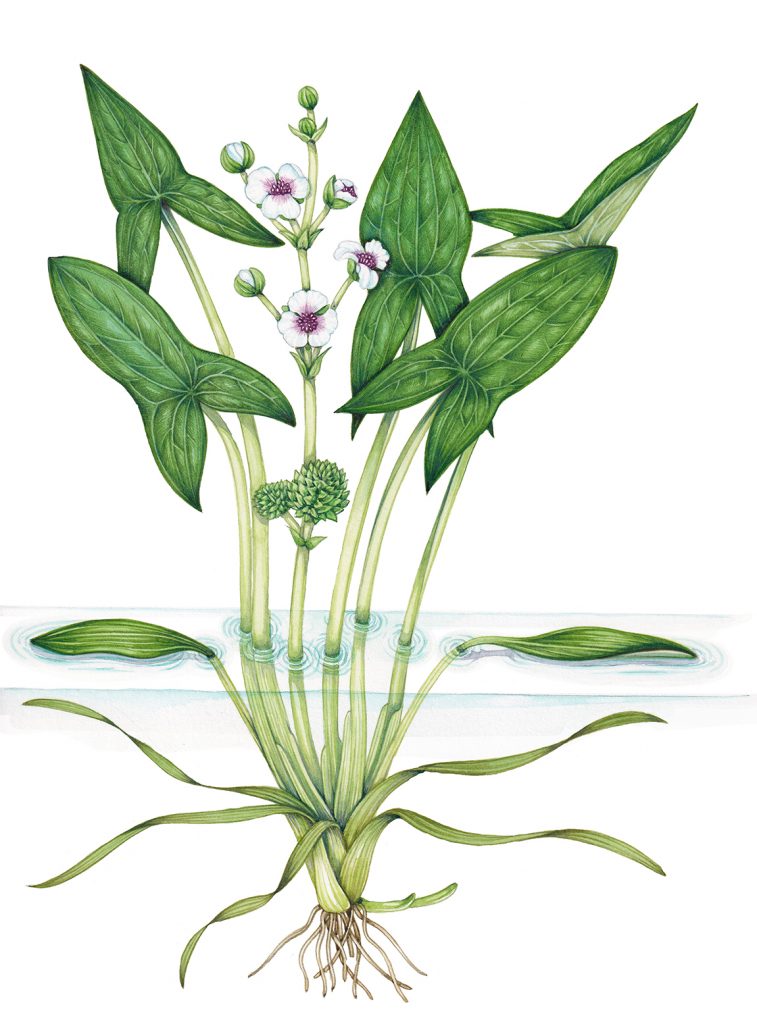 I’ve always been fond of horsetails.  There’s something wonderful and sobering about living plants that can also be seen as fossils dating back 100 million years.  These are probably the oldest existing genus of land plants.

The Water horsetail, Equisetum fluvatile has branched and unbranched shoots.  They bear strobili (breeding structures) at the tips of some shoots.

I find it helpful to label my drawings in light pencil.  Sometimes there’s quite a time between submitting the pencil rough and getting the go-ahead.  Often, in that space, I forget everything I researched and learnt about the plant!  You can see in the photo below that I’ve noted where the rhizome is brown (not green), and the tubers. 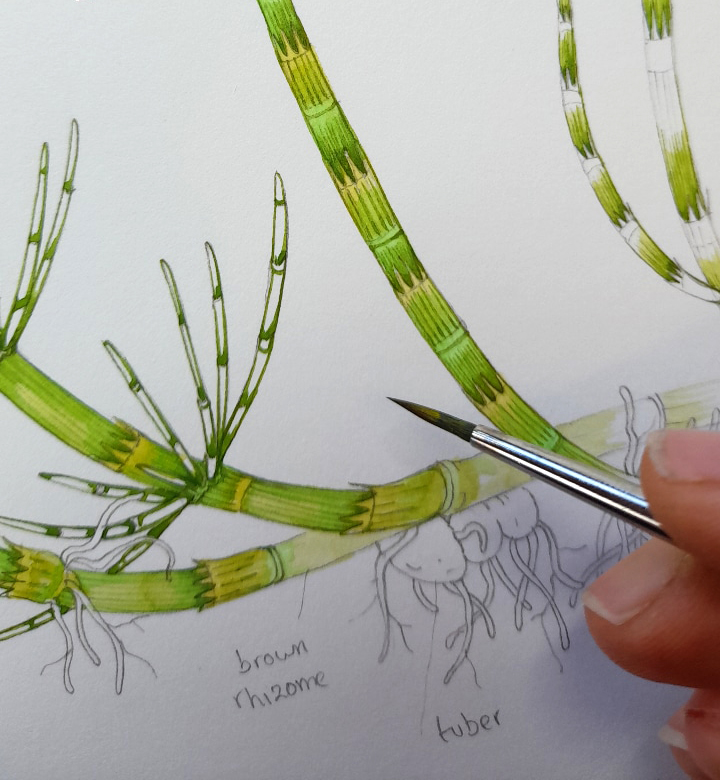 I add colour to plants by outlining them in paint, then using a paler colour to fill in the spaces.  Finally, I’ll pick out the detail with a darker green.  This is easier with a plant with simple, thin leaves (like this horsetail) than one with branching leaf veins. 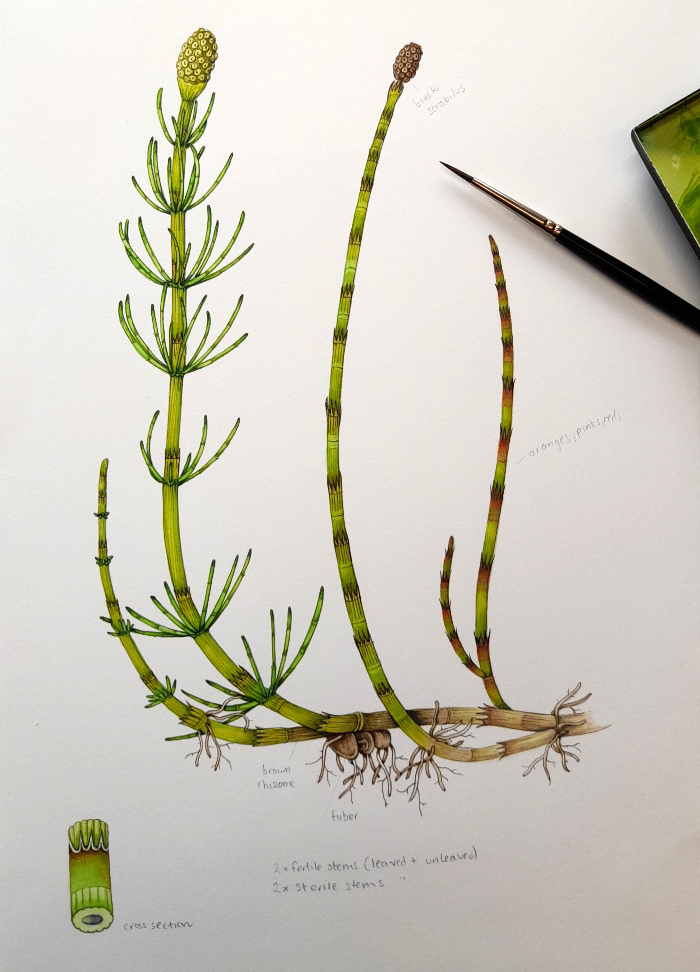 The horsetail needs a cross section of the stem  This also needs to be illustrated in full and accurate colour.

In some areas of the Gwent levels, these plants form big clumps; home to all sorts of wildlife.

The Branched bur-reed Sparganium erectum has a challenge of its own, in the shape of the globular flowers and fruit.  Depicting anything spiky, with points coming out at you, is difficult.  This is because of the perspective, and this plant was no exception. 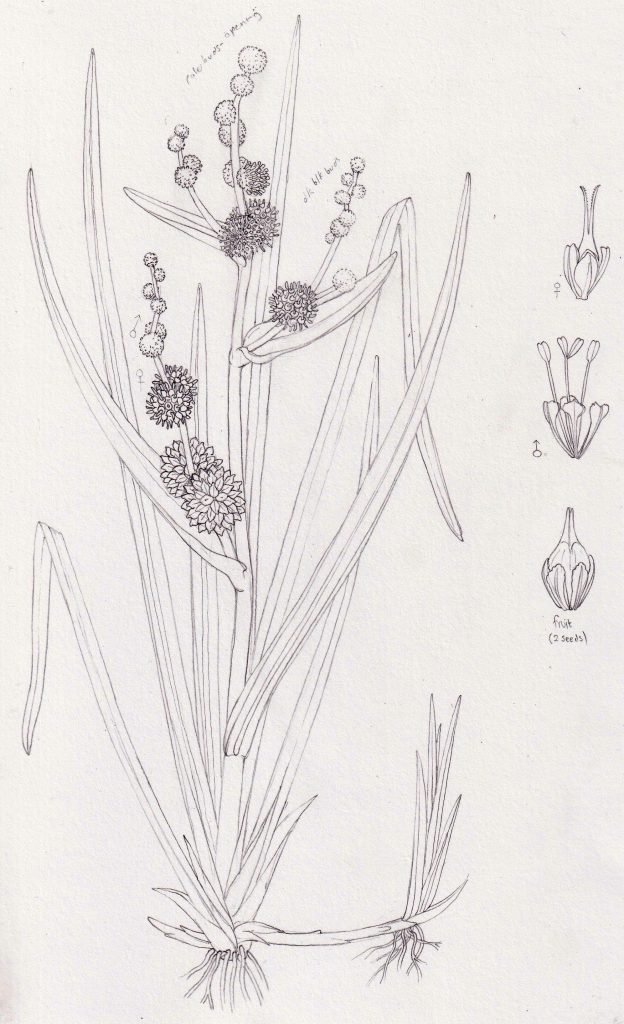 Having got the geometry sorted and the go-ahead from FSC, it was time to work on the illustration by adding colour.

The flowers are exceptionally complicated to paint as they change shape and colour during their development.  In comparison to these, the leaves with their long parallel veins were a breeze to illustrate. 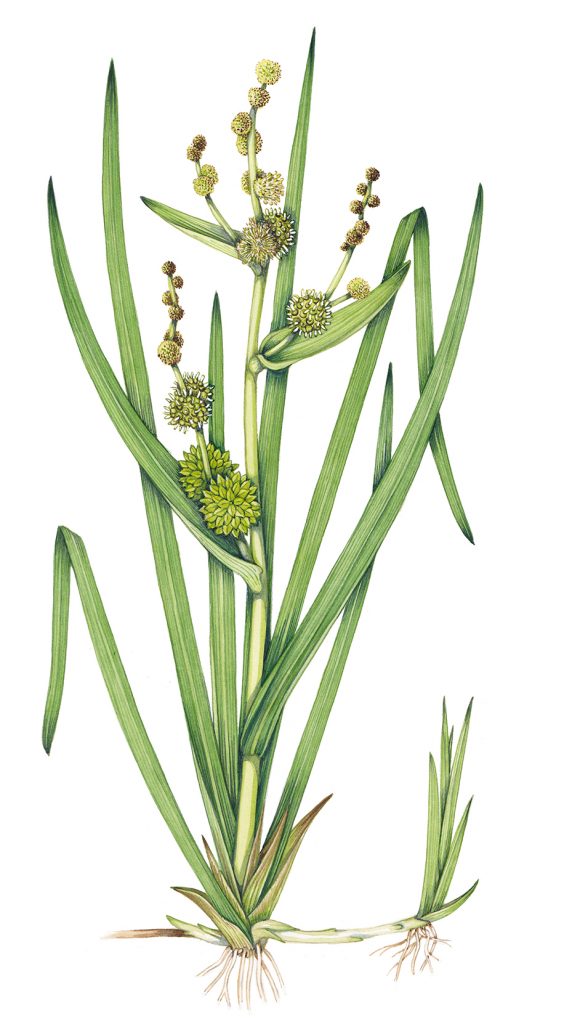 I like the finished illustration, but remained slightly unsure about its accuracy.  The vote of approval that came with the original being purchased by the county botanical recorder gave me the re-assurance that I needed!

The Gwent levels have plenty of Frogbit Hydrocharis morus-ranae.  It’s a pretty plant, and I was pleased to get the chance to illustrate it.

In the illustration below you can see how I deal with the water.  The rounded leaves need to float on, or emerge just above the water.  The flowers need to be rise above it.  Little concentric rings of pale blue trick the eye into accepting this positional information. 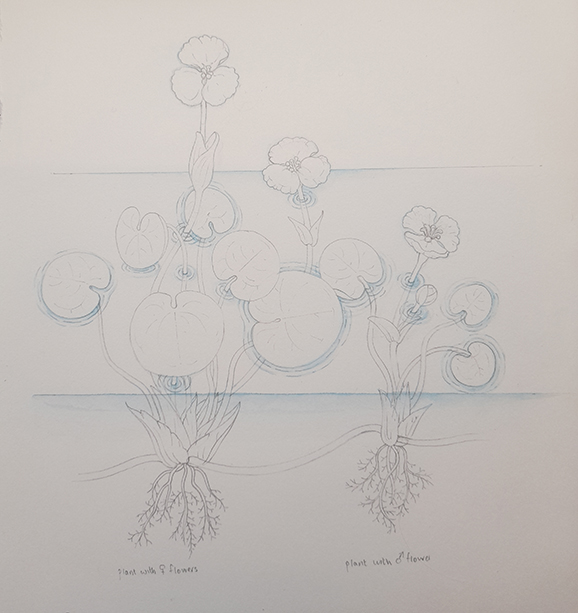 Below the surface, the illustration needs to convey information about the rhizomes’ spreading growth pattern. 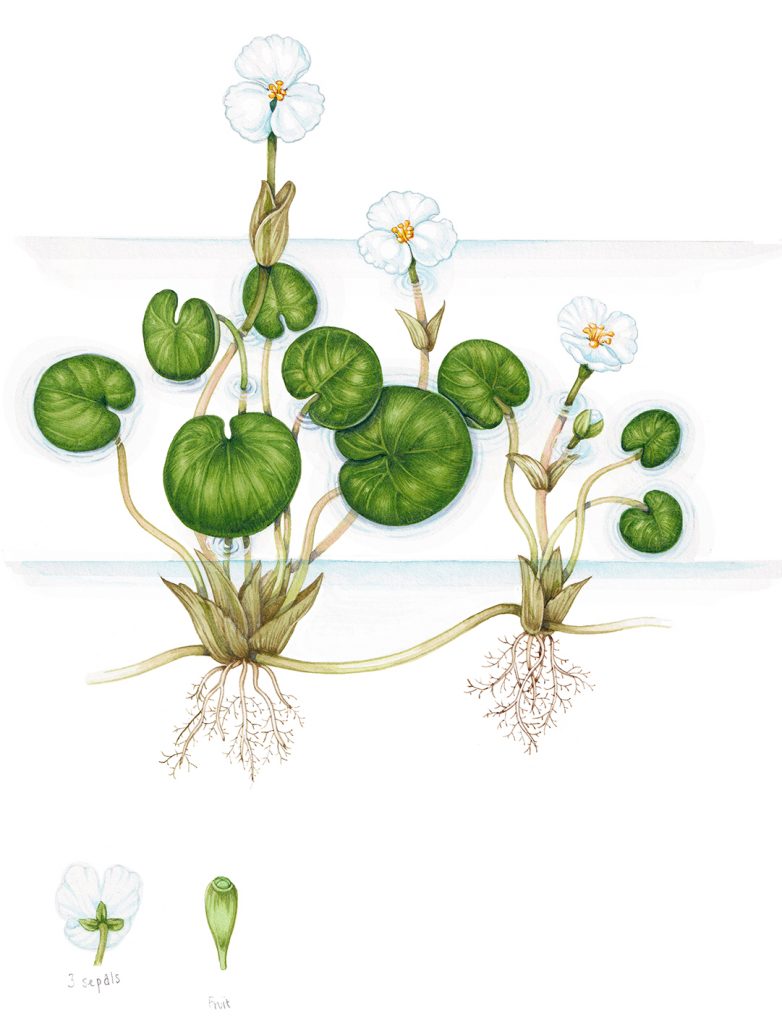 As you can see, in the final image the water becomes un-obstrusive.   However, it plays its’ part in giving  information about the biology of the plant.

The Flowering rush Butomus umbellatus is straight-forward.  There’s also the added joy of illustrating the pink flower.  I intersperse botanical illustrations that include a splash of colour with those that are more sombre and green.  This one was completed after the Water horsetail, and before the Broad-leaved pondweed. 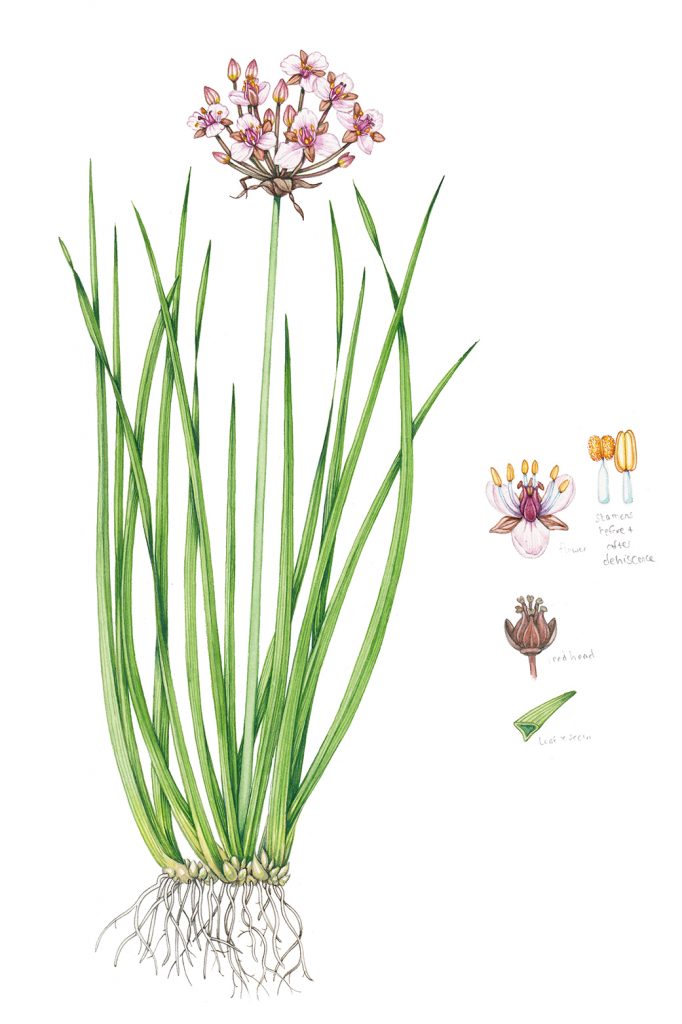 Parrots Feather Myriophyllum aquaticum was, without any doubt, the most detailed of the illustrations.  I had to get really really close to the paper to accurately draw the rosette of feathered leaves.  The illustrated rosette is 3.5cm across. 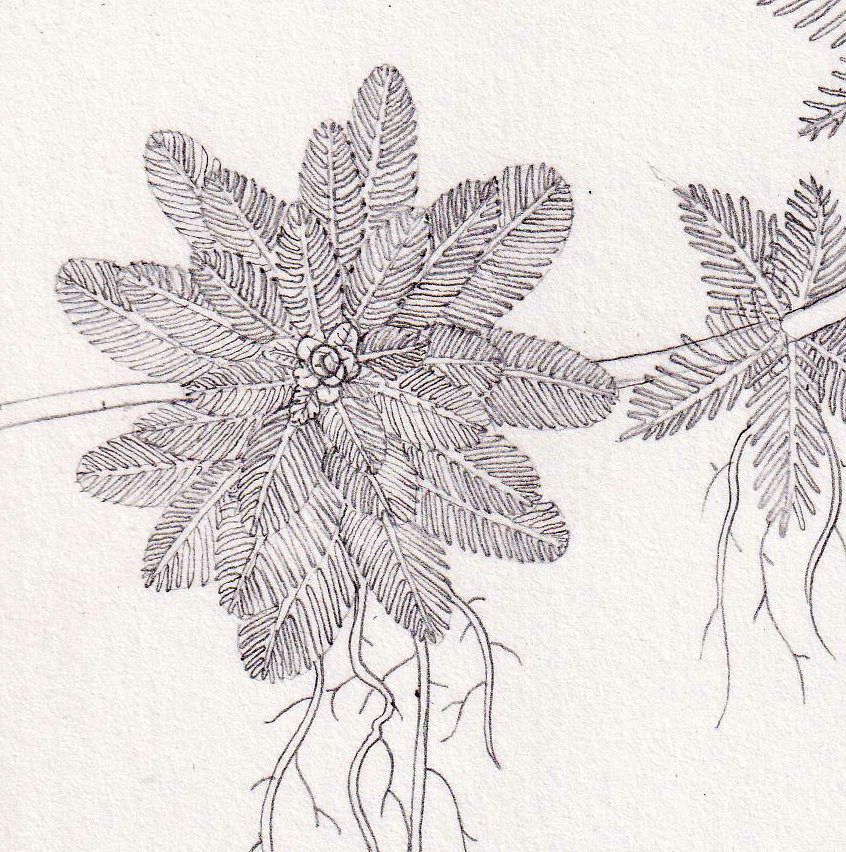 Adding colour was easy, they’re so tiny that it really only required outlining and a swift top-wash, before I picked out the darkest darks. 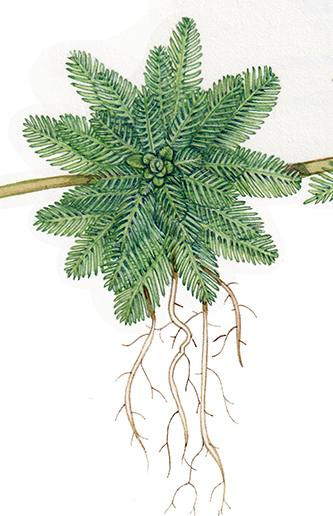 Saying that, I ended up dissatisfied with this illustration.  It’s lacking a certain organic feel, and is rather clunky. 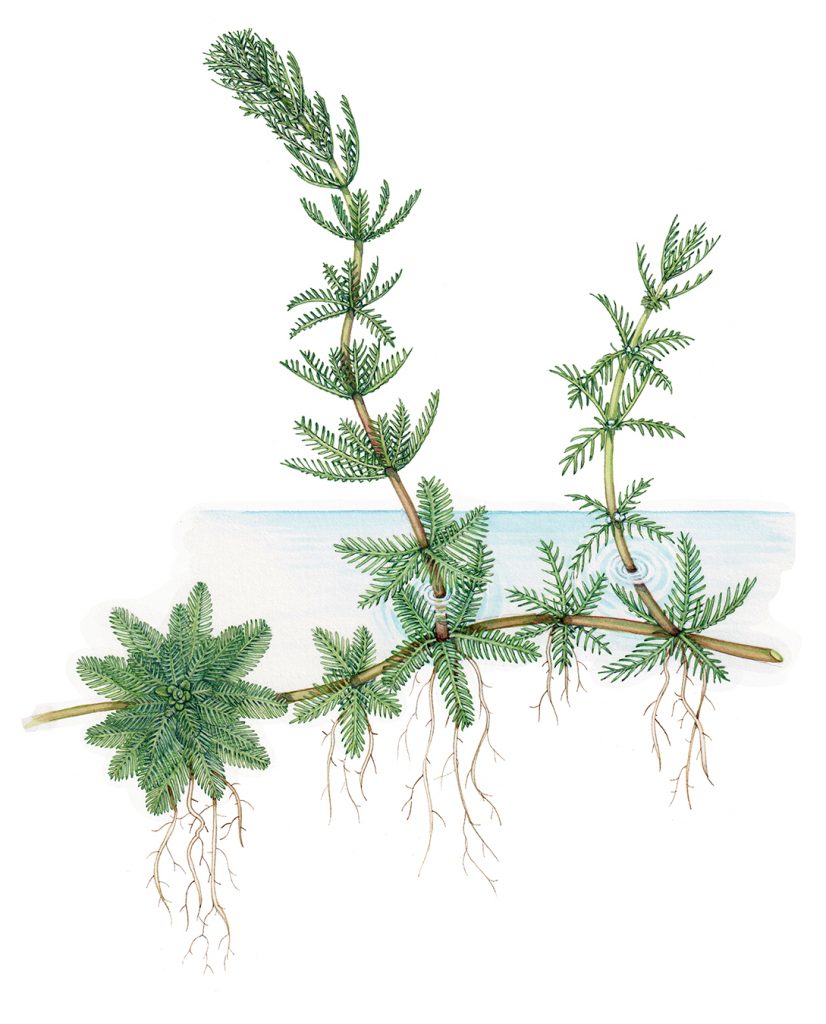 Sometimes illustrations end up being slightly disappointing; there’s not a lot to be done unless you start from scratch again.  As long as they’re technically competent, and the botanical aspects are right, then I’ve taught myself to accept that they’ll pass have to do.

Water plantain Alisma plantago-aquatica was another plant that is a beauty to illustrate.  The flowers are so pretty!  Again, there’s the challenge of showing the relationship between leaf and water. 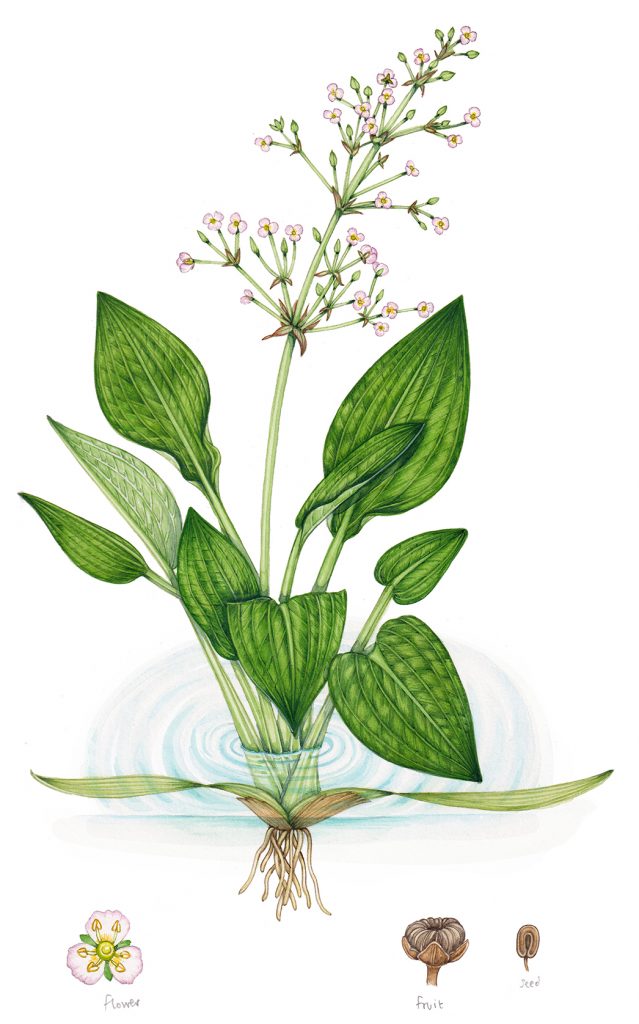 Broad-leaved Pondweed Potamogeton natans is one of the UK pondweed species I’ve not yet illustrated.

Having done the pondweeds for the Collins Flower Guide by David Streeter (many years ago), it was useful to be able to refer to my old notes.  This helped a lot with the anatomy of the flowering spike, which  confused me for quite some time. 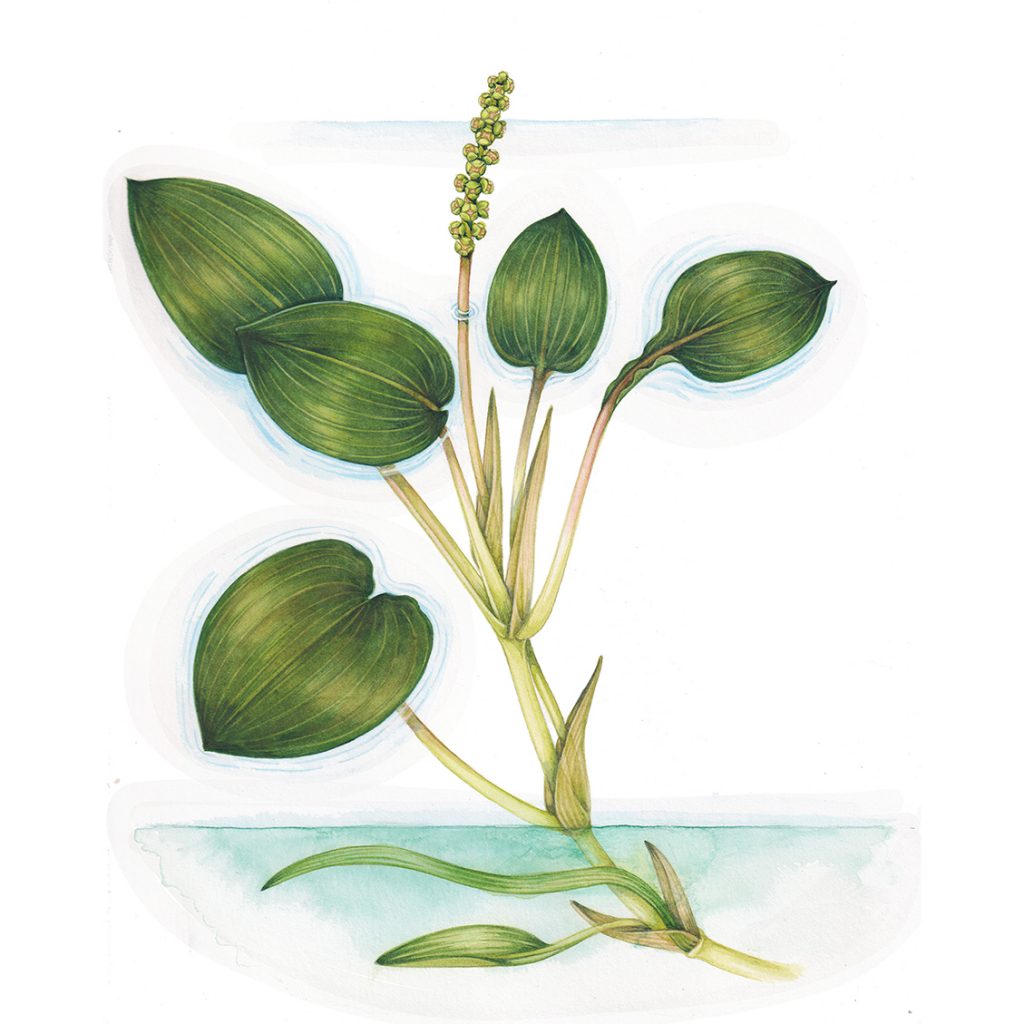 The leaves need to be a darkish green, and to appear ribbed, and slightly leathery.  This means leaving lighter areas to act as reflected light.  The water level is complicated with this illustration; floating, submerged, and emergent elements.

I look forward to seeing the fold out chart once it’s produced, and I also look forward to spending a bit of time looking at the Gwent levels.  I drive past them en route to my in-laws, and will now have a new interest and respect for them.

And how cool is it to know that there are Common crane breeding there, in amongst the Water voles and the ancient Water horsetails?