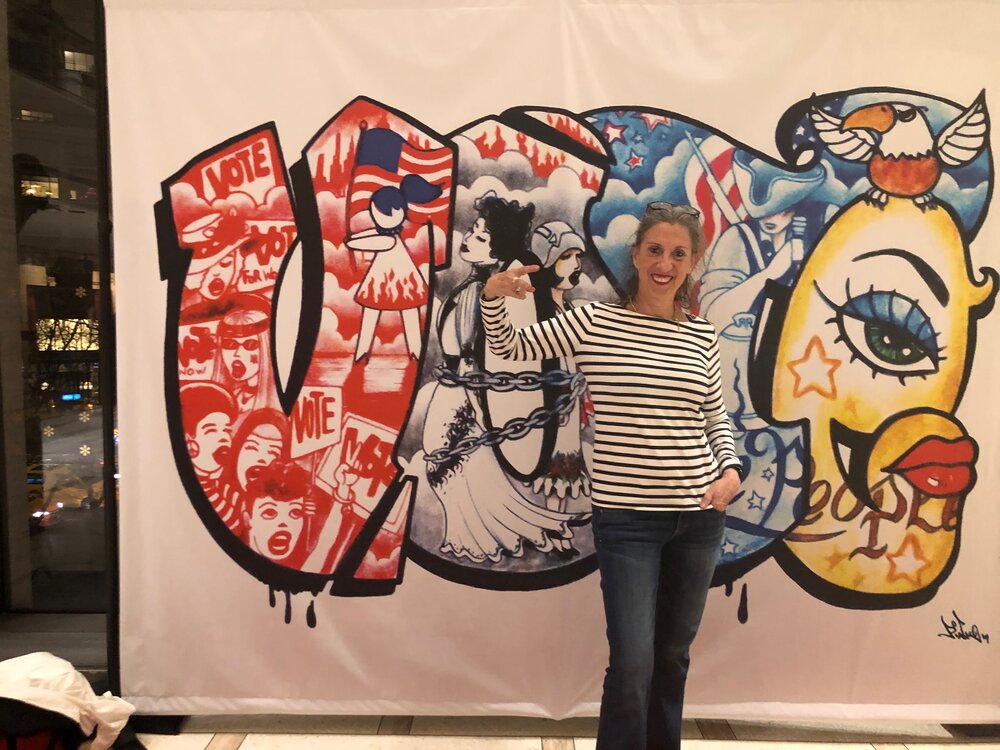 The New York Philharmonic is celebrating 100 years of American women having the right to vote by commissioning and premiering 19 new works by 19 women composers for a multi-season initiative.  The original works are being presented alongside classical pieces. The performance I attended on February 13th (and I’ve been going for over 35 years!) featured the Brahms Violin Concerto (with the solo violin performed by the amazing Janine Jansen),    Strauss’s delightful Der Rosenkavalier,  and the world premiere of  Tania Leon’s Stride, conducted by Jaap van Zweden. The night was electric with beautiful music, history, and female empowerment.

Having arrived early, I was delighted to see a one-work art installation in the lobby, a mural entitled Vote by an Ecuadorian-American graffiti artist named Lady Pink, that depicted women suffragettes chained and young women protesting for their rights. This powerful, groovy and gorgeous work of art was created back in 2014 on National Voter Registration Day to celebrate the 95th anniversary of the League of Women Voters of the City of New York.

I learned the league was founded in 1919 with the mission to inform and educate women about citizenship, their rights as voters and to encourage everyone to be registered and to vote. Today this wonderful organization works towards furthering women’s education on rights voting reform, criminal justice reform, and other issues affecting the city, such as the 2020 census.

It is events and initiatives like these that really impassion me as an artist and a citizen. As someone who is an activist, politically minded, and a woman, a celebration of the historic success that was the adoption of the 19th amendment, giving someone like me the right to have a say in the country I live in, is empowering. It shows the changes we can make if we team up, work together and fight for what is right. It makes me feel that if the suffragettes can move mountains one hundred years ago, then there is nothing stopping us now from continuing our efforts, nationally and internationally to treat all people equally.

The performance itself the other night was extremely moving to me. Still today, women musicians aren’t given the platform and accolades they deserve. The Vienna Opera House, in its extensive history, only staged a production written by a female composer this last December. The Oscars, after 92 years of ceremonies, only had a woman conduct its ceremony this year for the first time. I am extremely proud to be a subscriber of the NY Philharmonic, an organization that is giving women their due and a chance to showcase their brilliant talents.