Invasive and Japanese knotweeds are incredibly successful plants.  Originally from Japan, China and Taiwan, they escaped from ornamental gardens, and have become established across the UK.  They’re especially common in urban and brown-field habitats, and love railway embankments and the damp soils of water ways.  One of the most difficult aspects of controlling them is their regenerative ability.  Japanese knotweed can regrow from as little as 7 g of rhizome.  All it needs is one node and a bit of stem.  This makes them incredibly hard to eradicate, and means safely disposing of removed plants is a real headache.

The problems posed by these invasives include structural damage to buildings, suppression of native plants as dense thickets overpower large areas, and they can block waterways, contributing to flooding.

This is the knotweed we all hear so much about.  Companies have been set up to eradicate it, laws have been written to remove it.  It’s often used as a catch-all term to refer to all the invasive knotweed species.  However, it has distinctive characteristics. 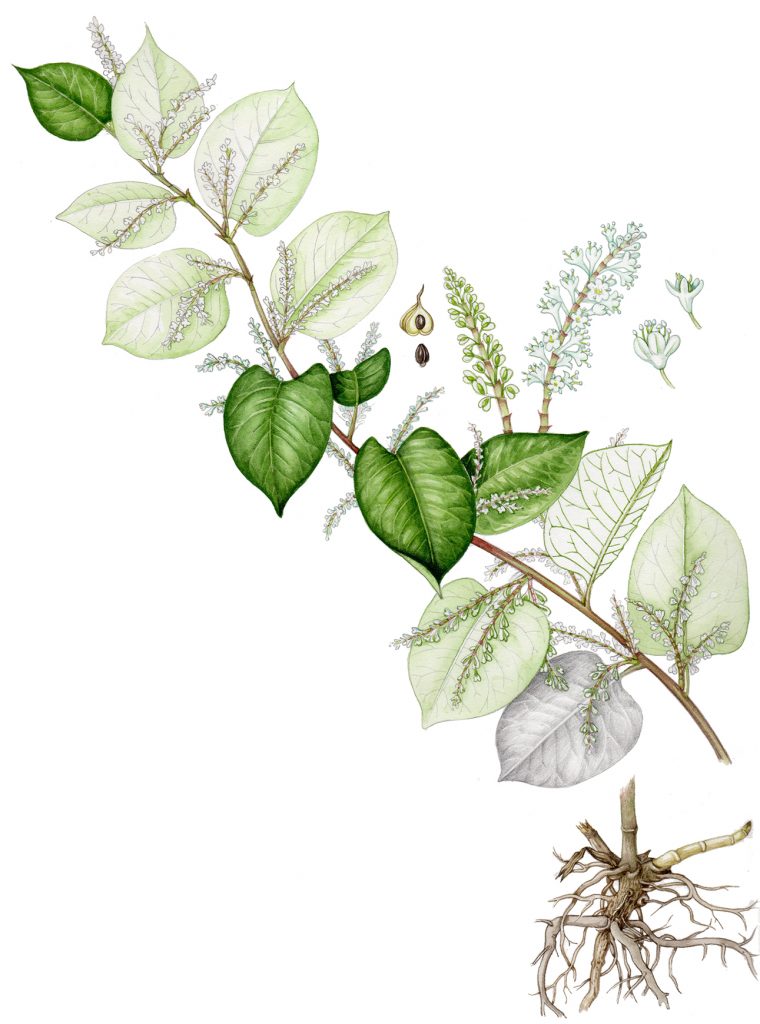 Japanese knotweed is a tall plant, up to 2 or 3 m, that grows vigorously, and forms dense thickets.  It was the first of the garden escapes to become established in the UK, introduced to gardens in 1825.  By 1886 it was established in the countryside.

Rhizomes look like ginger; knobbly and leathery.  Inside, they are carrot orange, and snap like carrots do.  Plants grow from nodes along the rhizomes, or from a root crown.  These put up pink buds which herald new growth.  The shoots start off red, and turn greener with age.  They’re said to resemble asparagus spears. 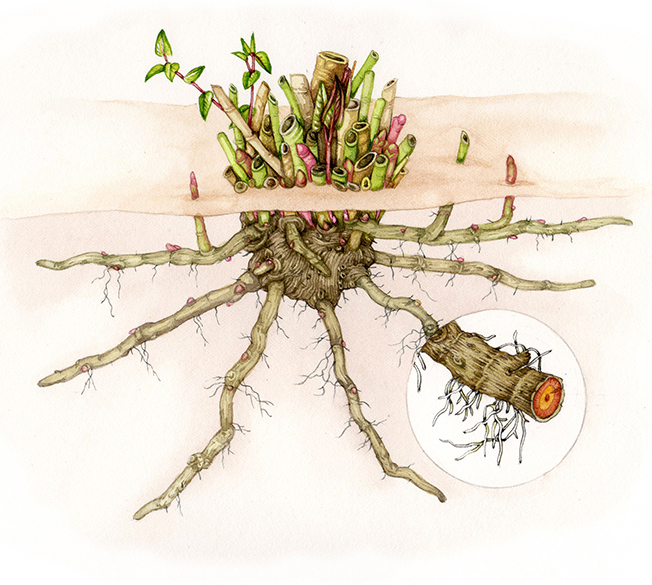 As with most of these knotweeds, the stems are hollow and bamboo-like.  They’re up to 4 cm in diameter, and have an obvious zig-zag growth pattern.  Pale green, they are sometimes flecked with purple.

The leaves are a fresh green, up to 15 cm long, and are shield shaped.  Importantly, the leaf bases are flattened.  The other knotweeds discussed here have rounded, cordate leaf bases.  The underside of the leaves is glabrous, or free from any hairs.

Flowers are tiny and greenish-white.  They grow in clusters at the base of upper leaves, and may be branched.

The main features here are the flattened leaf bases, and the lack of any hairs on the underside of the leaves.  The orange rhizome and crown with pink buds are definite indicators of Japanese knotweed, but could be easily confused with the Giant knotweed root crown and shoots. 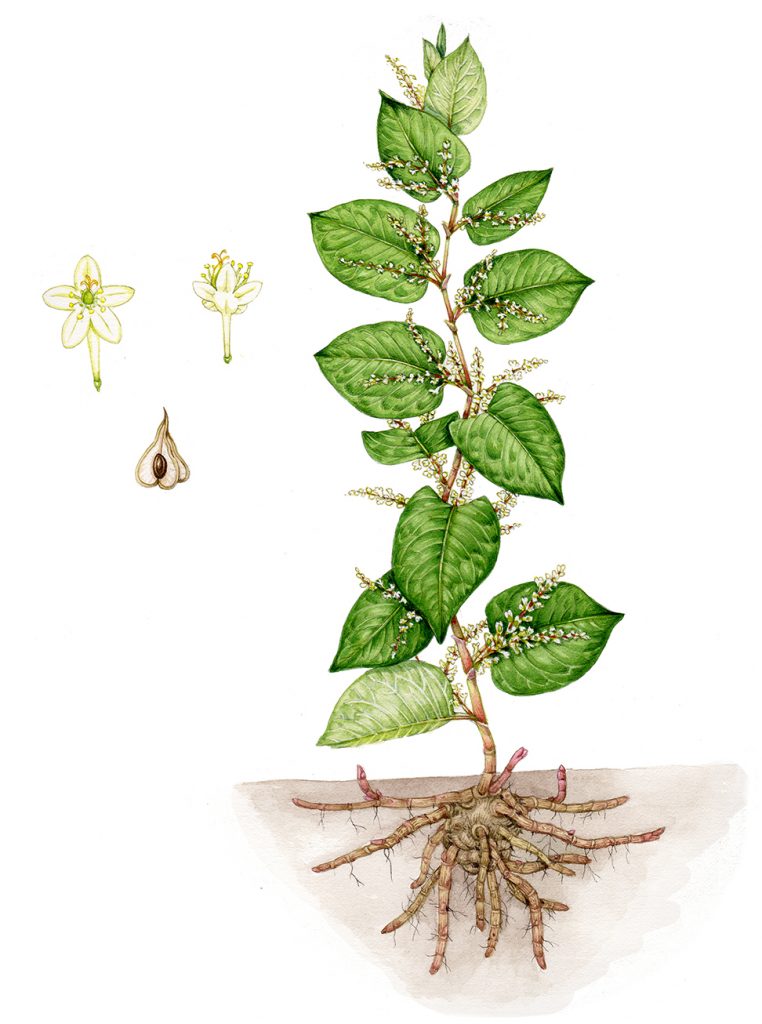 Giant knotweed is, as the name suggests, larger than the other two species we’re looking at.  Stems can grow up to 5 m in one season!  However, it’s less vigorous than the Japanese and Hybrid knotweeds. It arrived in the UK in 1896, was an established UK plant by 1903, and is a garden escape.

The rhizomes of Giant knotweed are similar to Japanese knotweed.  They’re a bit leathery and the outer surface looks like a ginger root.  Again, the inside resembles a carrot.  As with the Japanese knotweed they have crowns that throw up pink buds.  These grow into similarly red shoots that become greener with age.  Again, these are said to resemble asparagus spears.

It has bamboo-like stems with regular nodes.  Stems are pale green, flushed red at the nodes, and often flecked with magenta.  Growth form tends to be a little straighter than the Japanese or Hybrid knotweeds.

The leaves are enormous, up to 40 cm long.  They’re oval to oblong in shape, and have a rounded heart-shaped base.  They’re pretty smooth on top.  Underneath, there are lots of thin and wavy hairs scattered.  You’ll need a hand lens to spot them.  The veins are less flushed with red than Hybrid knotweed.  They yellow in the autumn.

The flowering spikes look crowded and frothy.  They’re borne in grape-like bunches, some branches of which will hang down.  The flowering branches are longer and denser than in Japanese knotweed.

The main indicators of the Giant knotweed is the enormous size of the leaves; heart shaped leaf-bases; the wavy hairs on the leaf underside; and the long, fluffy, dense flowering clusters. 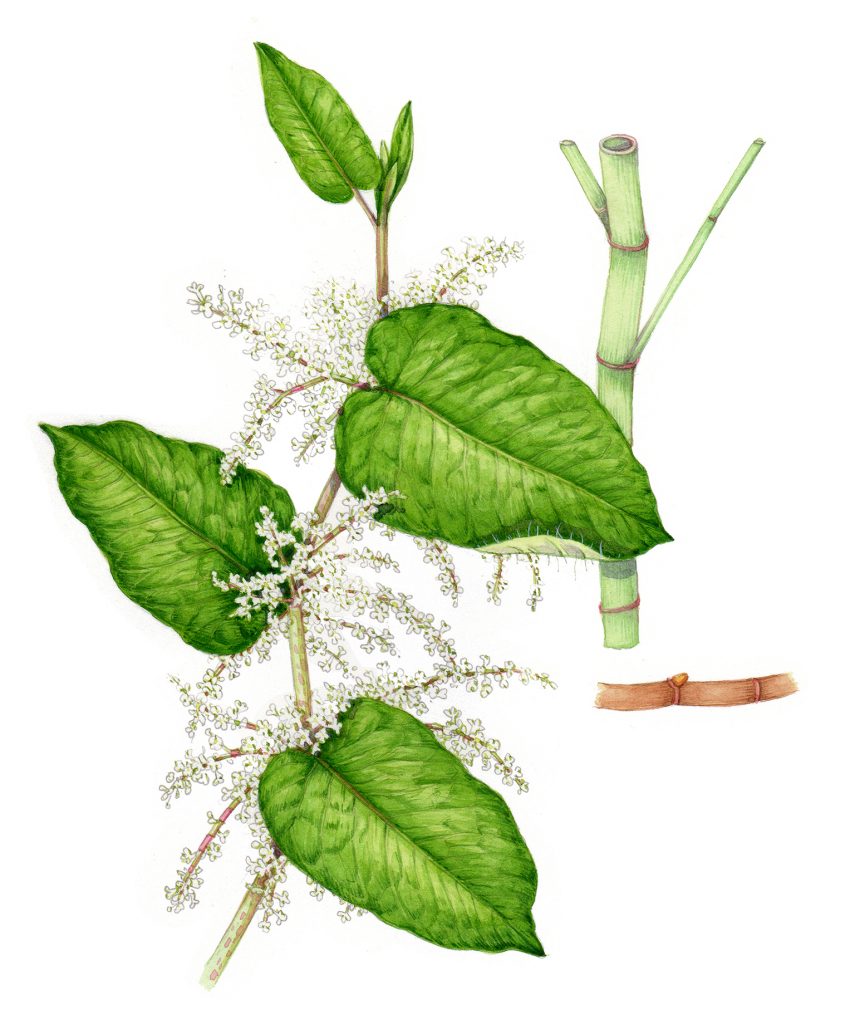 This knotweed is a cross between Giant knotweed and Japanese knotweed (hence its alternative latin name, Fallopia japonica x F. sachalinensis). It’s even more rampant and vigorous in growth than its parent species, and readily forms dense thickets.  It grows erect, and is 2.5 – 4 m tall. It has a distinctive pronounced zig-zag alternate growth form.  Hybrid knotweed arrived in the UK back in 1872, but became established as a wild plant by 1954.  Again, it’s a garden escape.

Their rhizomes are paler than Giant knotweed, or even white in cross-section.  The rhizomes create a network from which plants sprout, but may not have a distinct central crown (as the Japanese and Giant knotweed do).

Stems are bamboo-like with a diameter of up to 4 cm.  They’re pale green and flecked with purple.

Leaves are up to 25 cm long, and 18 cm wide.  The overall shape is oblong and shield like.  They have a pointed tip.  The leaf base is moderately rounded (cordate), and varies from leaf to leaf.  They look shiny and slightly crinkled.  On the underside of the leaf there are short white hairs (known as trichomes) which grow on the veins.  These hairs are triangular, and stout.  They’re clearly visible with a hand lens in the spring, but tend to fall off by late summer.  Young leaves may have red veins which become less pronounced with age.  In autumn they become yellower.

Flowers are greenish-white, and borne in dense clusters late in the summer.  Each cluster is more or less the same length as the leaf growing below it.  The flowering spikes grow from the upper leaf joints, are held loosely, and are branched.  They appear less dense than those of the Giant knotweed.

So the main things to look out for are the crinkly leaves, short stout hairs on the the leaf undersides, and heart-shaped leaf bases. 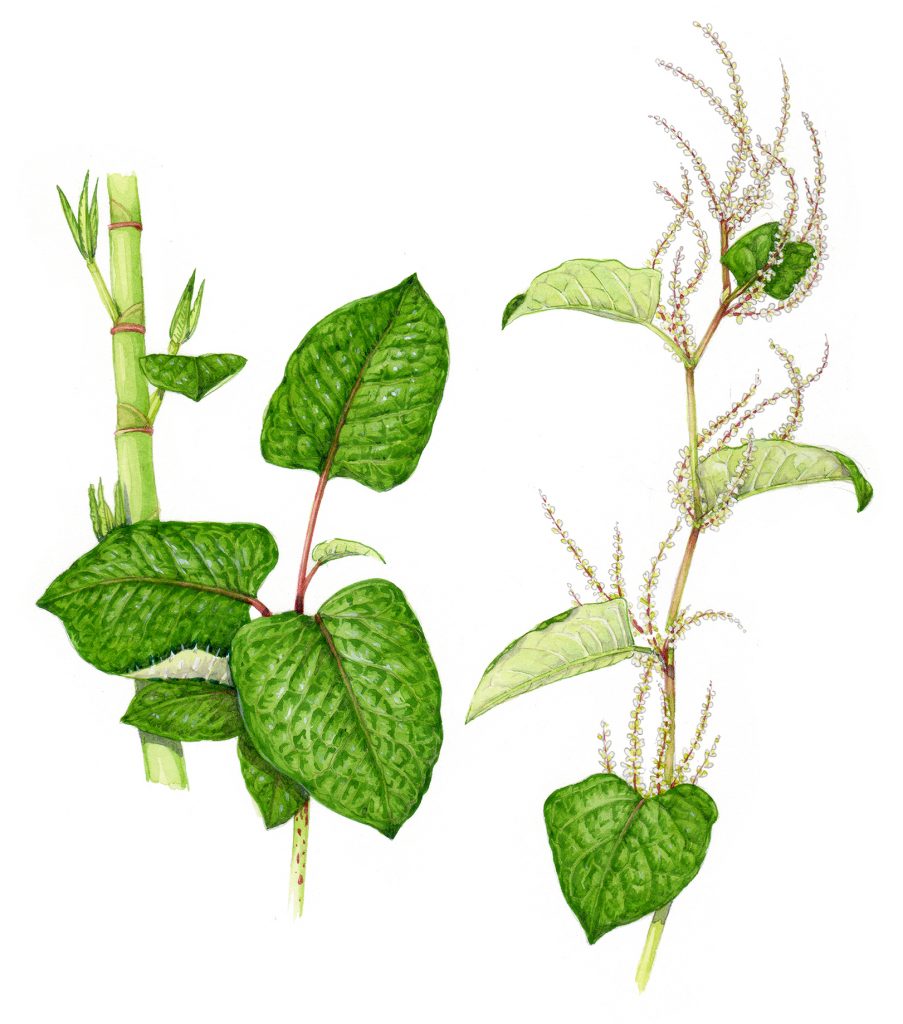 This plant is in a different family from the three knotweeds above, and looks more elegant than them.  I only include it because it does sometimes get confused with these other species.  It’s a slighter plant, and forms patches rather than thickets.  It’s comparatively tall at 1.5 m, but doesnt approach the heights of the other knotweeds discussed.  (Actually, Russian vine Fallopia baldschunica also gets mistaken for Japanese knotweed sometimes.  It has been known to hybridise with Japanese knotweed.)

There are no bamboo-like hollow stems.  Growth comes from rhizomes with a pale centre, not root crowns.

Leaves are 8 – 10 cm long and taper to a pronounced tip.  Veins (especially the mid rib) are crimson-red.  The leaf base varies from flat to cordate, and leaves can be bald or densely hairy below.  Helpful.

Flowers are tiny and borne in creamy clusters, on long branched spikes that come from the apex of the plant or from upper leaf joints.  The “feel” of the plant is different to the other three species covered here. 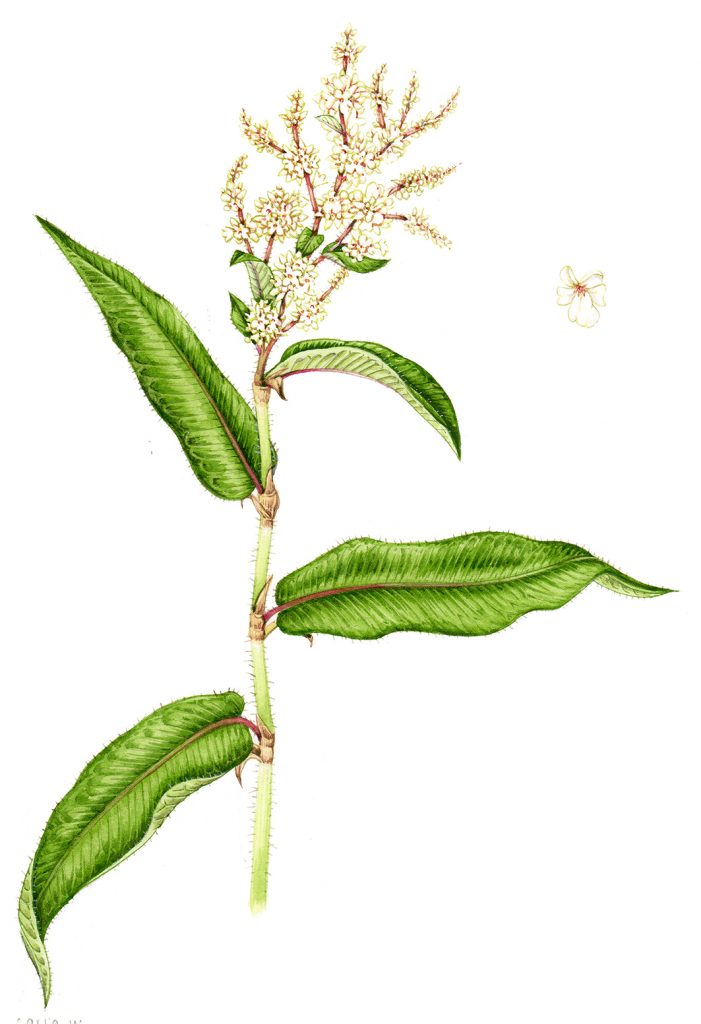 Telling these three species apart is important; it’s easiest to do earlier in the year when leaf hairs are visible.  All three are colonists of urban settings and can damage structures with their prodigious growth.  There are legal implications to having these plants growing on your property, and relating to their disposal.  For more on the legal side of Knotweeds, please check out Japanese Knotweed Law by Knotweed Help.

For more on Japanese Knotweed, have a look at my blog on completing illustrations for “Japanese Knotweed: Unearthing the Truth” by Nicolas Seal, probably the most informed book on this plant.

Another useful resource is “The Field Guide to Invasive Plants and Animals in Britain” by Olaf Booy, Max Wade, and Helen Roy.  Other sites that proved helpful include King County’s page, Phlorum’s page, and that of Japanese Knotweed Ireland.   It’s good to look at leaf shapes next to each other.  This can help clarify the differences between species.

One final word in defense of these plants.  Yes they’re trouble and can damage buildings and reduce house-prices.  Yes they out compete native plants.  However, the plus side is that they are great for pollinators, and are rather beautiful, too.  It’s not their fault they’re doing so well in this new habitat we humans brought them to! 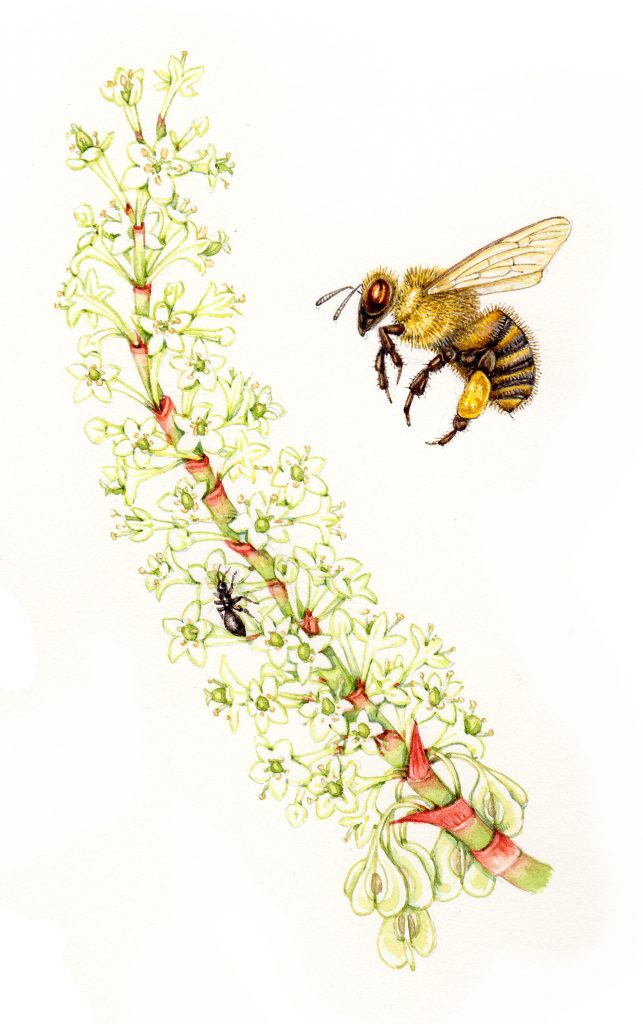 Here’s a brief film telling you how to identify Japanese Knotweed, made by Environot (the company Nicolas Seal, author of “Japanese Knotweed: Unearthing the Truth” manages).